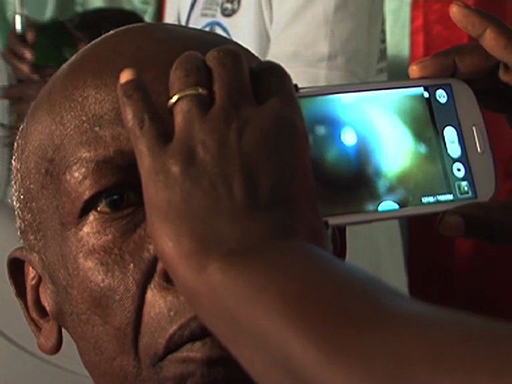 NAKURU, Kenya - An impressive new mobile phone app is being tested in Kenya. It acts as a mobile visual clinic, and is set to revolutionise eye care in Africa.

According to the World Health Organisation (WHO), nearly 300 million people are blind or seriously visually impaired.

But a team of doctors from the London School of Hygiene and Tropical Medicine armed with an innovative, low cost, smartphone solution, have set out to make an impact on this community.

Dr Andrew Bastawrous of the London School of Hygiene and Tropical Medicine and his team are working on a nifty new way to identify eye problems early on, which will make eye-care far more accessible than the traditional clinic which can cost over $100,000 to set up, if medical equipment, staff salaries and transport are factored in.

"Kenya was a natural test location," he told AFP. "For a country with a population of more than 40 million, there are only 86 qualified eye doctors, 43 of whom are operating in the capital Nairobi.

"Blindness is intrinsically linked to poverty, so in places that are low income, the incident of blindness is much higher..."

The Personal Eye Examination Kit, or PEEK, is one such solution. It is a mobile phone application requiring nothing more than a solar-powered backpack, a mobile phone, and an extra battery, at a total cost of under $500.

"The idea is to transform all this equipment into something that&39;s small, easy to use, and that can go to the patient, at the moment we expect the patient to come to the hospital, and rarely does that happen, especially those are most in need," says Bastawrous.

"The idea is there are so few healthcare professionals out there, that we need to keep them in the hospitals, delivering the healthcare they can, and have people who are not eye trained going and finding those who need care in the community."

Using PEEK, a rural church can be converted into a mobile clinic in under an hour. And Kenyans have shown they are willing to walk for hours to get help.

One of these is 52-year-old Mary Wambuii. She says: "My eye problem begun back in 1977 when at school. I felt pain in the eyes and tears would often come out. I thought the problem was caused by the cold weather."

Wambui gave up on finding treatment because existing medical care was far too expensive. Instead, she settled for home remedies like placing a cold wet cloth over her eyes when the pain became unbearable.

"I was treated at the Kijabe Mission hospital but the follow-up visits became too expensive. I had to pay bus fares and then queue in the waiting room for the whole day, and then go back home without seeing a doctor," she recalled.

She said Bastawrous&39; project, in which the tests were carried out at her home, was a welcome relief.

"I do not like the feel of hospitals. Their process is long, laborious and costly but with this phone, I got to know of my diagnosis with just a click," she said.

Using the app, which includes a simple clip-on device, a PEEK volunteer conducts a vision test on Wambuii. A photo of the back of her eye is taken, scanning for potential problems. This image is uploaded to be examined by a professional.

Experts have been astonished at the success of the pilot project, which is not yet complete. Over a thousand people have already been treated, and for a continent where more people have access to a mobile phone than running water, PEEK&39;s potential is huge.

Simon Kamau, 26, has been in almost constant pain since he was a playful three-year-old and accidentally pierced his eye with a sharp object, but this smartphone technology now offers hope.

His family live in an impoverished part of rural Naivasha in Kenya&39;s Rift Valley region and could not afford the 80-kilometre journey to the nearest specialist hospital, leaving the young Kamau blind in one eye ever since. But now he has a better chance of receiving the medical treatment he requires.

The equipment used in the study, which has been running for five years and is now in its final stages, is a smartphone with an add-on lens that scans the retina, plus an application to record the data.

Data from each patient is uploaded to a team of specialists, who can come up with a diagnosis and advise on follow-up treatment. The results are also compared to tests taken with professional equipment to check the smartphone is a viable alternative.

The technology is deceptively simple to use and relatively cheap: each &39;Eye-Phone&39;, as Bastawrous likes to call his invention, costs a few hundred euros, compared to a professional ophthalmoscope that costs tens of thousands of euros and weighs in at around 130 kilogrammes (290 pounds).

Bastawrous said he hopes the &39;Nakuru Eye Disease Cohort Study&39;, which has done the rounds of 5,000 Kenyan patients, will one day revolutionise access to eye treatment for millions of low-income Africans who are suffering from eye disease and blindness.

With 80% of the cases of blindness considered curable or preventable, the potential impact is huge.

Bastawrous says his &39;Eye-Phone&39; has proved its worth, and can easily and accurately diagnose ailments including glaucoma, cataracts, myopia and long-sightedness.

Treatments range from prescription glasses and eye drops to complex surgery that is conducted once every two weeks at a hospital in Nakuru, the nearest big town. So far, up to 200 of the 5,000 people involved in the study have had surgery to correct various eye ailments.

Kamau is among those expecting to receive surgery on his blind eye. While doctors say he is unlikely to recover his full vision because the injury was so long ago, they can at least stop the pain and swelling caused by the additional strain on his functioning eye.

"I can hardly do manual work around the farm. Once the sun shines, my eyes water and I feel a lot of pain," said Kamau, who lives on a small farm with six family members.

A volunteer points out: "...It could have a big impact in terms of eye health. Is it revolutionary eye care? No, there are lots of programs who do that, but there is a gap, and it is about finding patients. That&39;s what we hope PEEP can provide"