Farming without soil or sunlight 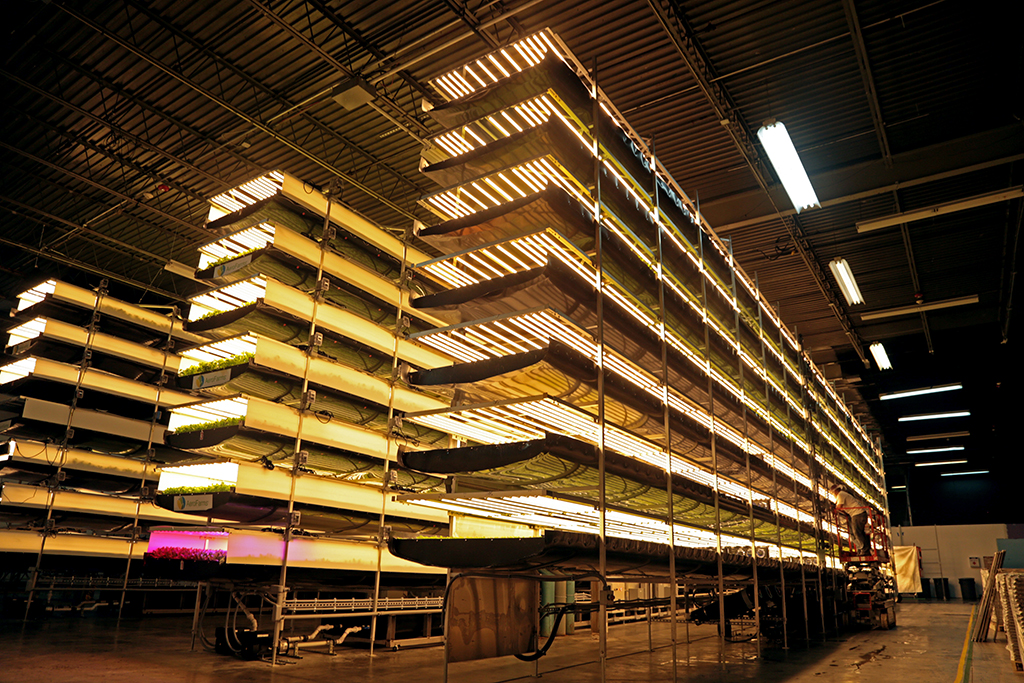 Inside one of eight AeroFarms facilities in the United States. The company is growing leafy green vegetables without soil or sunlight.

NEW JERSEY - From the outside it looks like a non-descript laser tag warehouse, but inside is a pioneering operation that’s changing the future of urban farming.

AeroFarms in Newark, New Jersey is farming nutritious, leafy green vegetables (like kale, rocket leaf and watercress) close to urban centres on an industrial scale without sunlight or soil.

How? Through vertical structures using LED lights and aeroponics.

They are looking to expand their technology to South Africa and have already hosted visits from some large South African retailers.

Watch a clip from an interview with David Rosenberg in which he explains how vertical farming and aeroponics work:

The AeroFarms process uses a closed root system so there is no river run-off or contamination of fresh water systems.

Growing locally in urban areas is also sustainable because it reduces transport emissions.

Through controlling the LED and aeroponics system the flavour and size of the leafy green vegetables can be altered, but it’s not genetically modified, says chief marketing officer Marc Oshima.

Watch a clip from a tasting session with Marc Oshima:

Rosenberg says this is a complex question to answer.

“On the energy side, it is important to consider all elements. First and foremost, the way AeroFarms grows is unique and it’s different from the way a lot of farmers grow, even vertical farmers. We put a lot of resources into developing our luminaire, our lighting system,” he says.

However if you look at the energy consumption for farmers in California, and the fact that the state uses 25 percent of its electricity to pump water from a place like the Colorado River, that system is just as energy intensive.

“So you have to take all these factors in. It’s actually a compelling energy story the way we grow,” he says.

Watch a clip of an interview with David Rosenberg as he explains energy efficiency in vertical farming, compared with traditional outdoor farming:

In addition to its eight facilities, AeroFarms is in the process of completing construction of what it says will be the world’s largest vertical farms based on production.

Rosenberg says the new facility will “have features of automation and seeding, harvesting, cleaning of our growth media as well as packaging.”

He says that growing on such a large scale helps to reduce the cost for customers.

“Economies of scale are big; the fact that it’s the world’s largest helps us lower the cost structure so that we can sell to supermarkets at the same price that they buy from the field farmer,” says Rosenberg.

There are no fungicides or pesticides used in the vertical farming process so consumers buying AeroFarms produce have nothing to wash off.

*Please note this was a sponsored trip. eNCA journalists were guests of the US Embassy in South Africa.