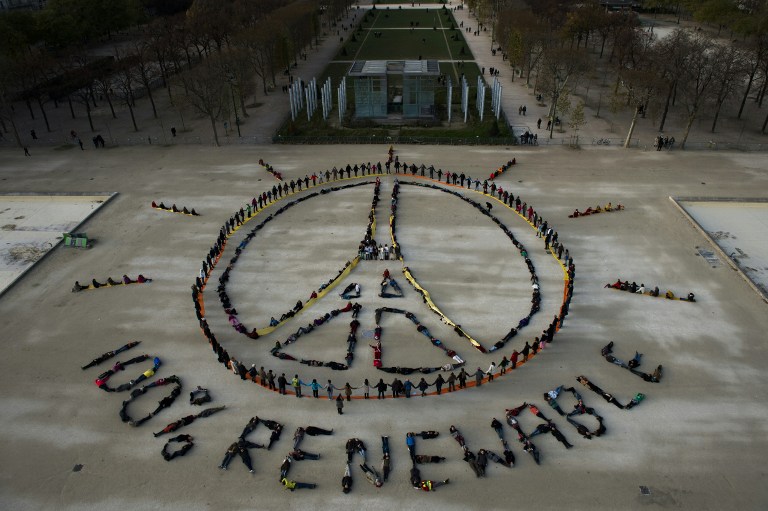 People make the "Pray for Paris" sign along with the slogan "100 percent renewable" in Paris on December 6, 2015 on the sidelines of the COP21 climate change conference.

BUEA – An initiative by youth organisations in Cameroon to turn human waste into biogas is reducing pollution and providing cheap, renewable energy to the growing populations of the university towns of Buea and Bamenda.

GALLERY: How does biogas technology work?

Bioenergy-Cameroon, a non-governmental organisation run by young people, instals equipment that converts waste from septic tanks and pit latrines into biogas, which can be used for cooking or heating and can power small generators to run household electrical appliances.

The organisation says its efforts are spurring the use of clean energy in homes and secondary schools where grid electrical power is non-existent or unreliable and alternative sources of energy such as gas cylinders are expensive.

"Many have come to discover the cheap energy in their backyard and are not only embracing the technology but are also learning the transformation process," said Cedrick Kemajou, Bioenergy's co-ordinator.

As it expands, the project is bringing local councils and other youth groups on board.

"With exponential growth of the university town of Buea, we had problems handling human waste. That is why we are glad that this waste can be used to produce energy that will help the residents not only fill the energy gap but also tackle human waste and sewage (management) problems," said Patrick Ekema, mayor of Buea.

Ekema said that with easier access to energy, the council can better tackle other development problems such as providing clean water.

Biogas is produced by connecting a septic tank to a bio-digester which breaks down the organic matter, producing a natural gas known as bio-methane.

Students in schools where the infrastructure is installed are trained in the biogas transformation process and are shown how to build, instal and maintain the biodigester and generators at the school.

"We give practical training to girls in colleges on how energy is generated from the sun, water and human waste," said Monique Ntumngia, co-ordinator of Green Girls, a Cameroonian NGO that trains young women in technology.

"We target female students especially, to break barriers and get them into innovative technology," Ntumngia explained. Green Girls has trained 600 girls in schools in towns such as Bafut, Nkwen and Mankon, she said.

An additional 3,000 households in Buea and Bamenda have received domestic bio-digesters through the project, and demand is growing fast, project organisers say.

Many students in Buea and Bamenda say they have long suffered from persistent blackouts on the traditional grid power, where energy largely comes from hydropower.

READ: Africa looks to solar for communities off the grid

"We could not study well during such blackouts that sometimes last for over a week. We have been suffering even though we are blessed with a clean energy source in our backyard," said Magdalene Lum, a student at the University of Buea.

"The new energy from our human waste will supply us electricity constantly and cheaper," Lum said.

According to data from the World Bank, only 53 percent of Cameroon's population of 23 million have access to electricity.

Bottled cooking gas can be difficult to afford, especially for Cameroon's poorest. A 12kg cylinder of liquefied petroleum gas costs 6,000 Central African francs (R138), according to the Ministry of Trade.

Families benefiting from the cheap biogas say they are using the money they save for other essential items such as schooling and medical care.

"Biogas has spared me the trouble of paying monthly electricity bills and buying bottled gas that is regularly out of stock. This has saved me some money to support my children's education," said Mercy Kum, a trader in Buea.

College officials are pleased that biogas insulates their budgets from what can be volatile electricity prices. Rates fluctuate according to the availability of hydropower, which is increasingly vulnerable as climate change brings more droughts and floods.

"The biogas we generate provides a constant supply of the energy the school needs, unlike the hydroelectricity that regularly goes on and off," said Peter Nke, principal of Baptist High School Buea.

Having a biodigester installed and receiving training to use and maintain it costs 500,000-700,000 Central African francs, a sum paid by the institution or households that request the service. A group of homes can use a common biodigester to share the expense.

Turning waste into biogas may not be new in Cameroon, but the youth organisations say producing it from human waste in multiple households and institutions, and training students – especially girls – on the technology is an innovation.

"Most boarding schools in the Northwest and Southwest regions now use biogas for cooking and lighting produced from human waste, with trained students to manage the process," said Ntumngia.

Samuel Nguiffo, executive secretary of the Center for Environment and Development (CED), an NGO in Cameroon, explained that most communities in urban areas traditionally use charcoal or kerosene stoves for cooking.

Charcoal production creates a huge demand for wood, which has frequently led the government to impose bans on charcoal burning and forest destruction.

The use of biogas energy should help preserve the country's forests, Nguiffo said.

CED estimates that the biogas project may be reducing greenhouse gases by as much as 60 percent in the vicinity of the projects, as well as curbing pollution from open air defecation and pit latrines.

"Cameroon will derive enormous economic, health and especially environmental benefits if renewable energy efforts are spread throughout the country," he said.