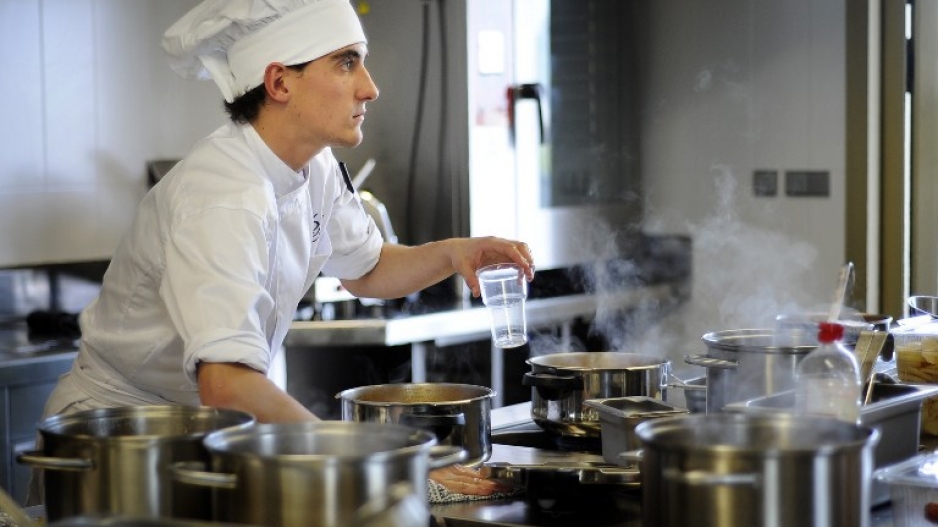 A student attends a class at the Basque Culinary Centre on October 4, 2012, in the Northern Spanish Basque city of San Sebastian. Ham with brie, wild mushroom croquettes, cured-meat ravioli: gourmet cooking has put this Basque town on the gastronomic map.

SAN SEBASTIAN, Spain - It&39;s a scene reminiscent of "Clockwork Orange": a chair, large screen and cap of brain sensors with dangling cords await the next guineapig. In a room nearby, big vats of smelly goo are lined up on a table.

Several floors above this secure lab, a chef in a classroom plunges a green balloon full of cream cheese into a smoking bowl of liquid nitrogen, one of the teaching techniques at Spain&39;s Basque Culinary Center (BCC).

This gastronomy school in European culture capital San Sebastian is but one manifestation of a four-decade culinary revolution that has made the northern Basque Country famous for its traditional haute cuisine... and its more controversial, experimental counterpart.

that time I went to Basque Culinary Center and learned about gastronomy https://t.co/LdmRXza5eI @bculinary donostia pic.twitter.com/gA23q9UAzF

"In many places in the world, there&39;s a certain degree of aversion to what we come up with," says BCC collaborator Andoni Luis Aduriz, whose avant-garde Mugaritz eaterie is rated the world&39;s sixth best by Britain&39;s influential Restaurant magazine.

"It seems that often, it&39;s identified as an exercise that harms tradition or puts it in question," says the 44-year-old Basque chef.

"But in the Basque Country, there are a series of restaurants that have stepped out of the margins of this tradition, trying to find new options."

From ice shavings with shrimp juice to apple chunks covered in a mould-like substance, Aduriz and his team like to disconcert diners at Mugaritz -- using a strong dose of science.

Customers have for instance been treated to what looks like unappetising rotting bread which has actually been injected with the fungus found in French Roquefort, giving it a mouth-watering cheesy taste.

But Aduriz&39;s experimental approach to gastronomy goes beyond his Michelin-starred restaurant near San Sebastian.

He and his chefs have worked closely with scientists of all kinds to find new cooking techniques or textures, and determine how their discoveries can be used not only at Mugaritz but in the wider world.

Take bubbles. The team worked with a rheologist -- who studies the flow of matter -- to make them stable and edible.

But the team soon realised this kind of texture-changing process could be used further afield -- to vary food options for people who have trouble swallowing, for instance -- and are working on developing such products.

Like other chefs in the region, Aduriz works closely with the BCC, which apart from teaching gastronomy also has a team of nutritionists, chemists and cooks on site to conduct culinary experiments.

They measure the effect of what diners see on their brain activity, for instance, by showing them food images while they eat with a sensor cap on, to try and determine what exactly gives them visual and gustatory pleasure.

The vats of goo are fermenting acorns, eaten with gusto by Spain&39;s pigs but largely abandoned by humans, and the centre is trying to find new edible applications for this very local nut.

"Everything started here more than 30 years ago."

Or in 1976, when restauranteurs Juan Mari Arzak and Pedro Subijana met France&39;s star chef Paul Bocuse at a Madrid round table.

Inspired, they started shaking things up in their native Basque Country, a mountainous region known for its fierce sense of identity which like the rest of Spain was getting its first taste of freedom after the end of Francisco Franco&39;s dictatorship.

Cooking there is such a part of life that men who were shooed away from kitchens in their homes created private societies where they could cook in peace, and these exist to this day.

Arzak and Subijana fixed traditional dishes they thought were too heavy or overcooked, introduced foreign ingredients with a local twist and popularised haute cuisine in what became known as the Basque culinary revolution.

With this as a base and similarly inspired by "nouvelle cuisine," Ferran Adria later pushed the revolution further in his Catalonia region -- Spain&39;s other gastronomic stronghold in the northeast.

The man known as the father of molecular gastronomy turned cooking on its head by deconstructing and reconstructing ingredients, changing the image of Spanish cuisine and bringing it to the global fore.

Many chefs in the Basque Country followed suit, as did others in the rest of the world.

"All of a sudden eating meant having an experience... They brought new textures, new approaches," says Alexandre Gauthier, France&39;s latest star chef who has visited Spain on numerous occasions.

But to those who say France is resting on its gastronomic laurels, Gauthier points out that haute cuisine in Spain is still a niche compared to his own country, where there were pioneers too.

"Each era has its revolution."