How can SA get on the solar-coaster ride? 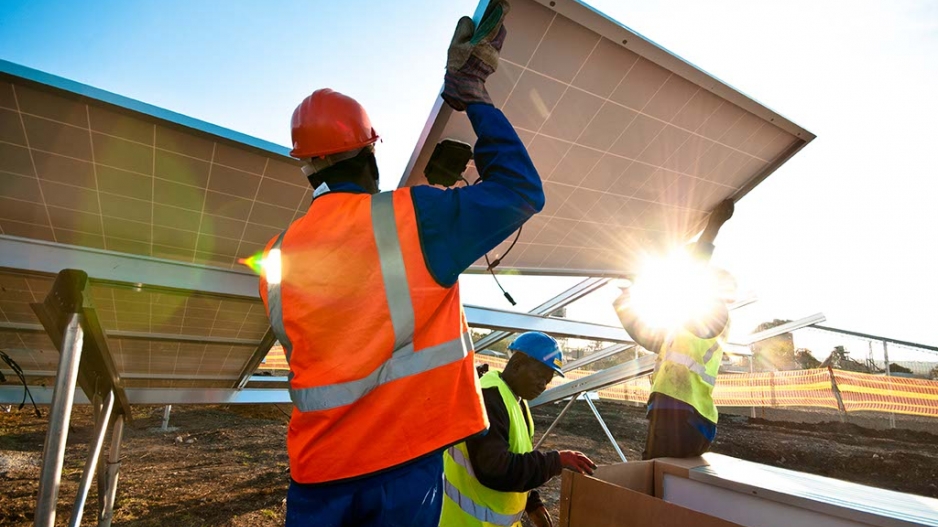 Workers install solar panel units at RustMo1 solar farm in Rustenburg. The farm is the first independent power producer in South Africa to supply power to the Eskom grid. May 28, 2013.

NEW YORK - It’s been referred to as the solar-coaster, the massive growth in the green economy sector in the United States. According to the Solar Energies Industries Association (SEIA), one in every three new jobs is a solar job.

This year the US has reached a landmark of 1 million solar rooftop installations.

“The growth of our industry has really been astonishing,” says Dan Whitten, Vice President of Communications at SEIA.

With South Africa’s abundant natural resources for renewable energy, is the same kind of growth possible?

Whitten says absolutely. Three key things happened in the US to boost in the sector.

Watch a clip of an interview with Dan Whitten about how the US boosted the solar energy industry:

“Over the last few years some of the fastest growth from power in the United States has been from wind power and solar power,” he said.

Friedman says its because technology around the world is changing fast.

“Technologies that were maybe science fiction ten years ago, are now literally in the market and changing the world,” he said.

Watch a clip of an interview with David Friedman about the clean energy revolution:

The infographic below, courtesy of the Economic Policy Institute, shows which states in the US have the most green economy jobs:

A big challenge that the energy industry in the United States is facing is transitioning from coal to renewables. Friedman says the government is trying to provide employment opportunities to people formally employed in the coal sector.

Watch a clip of an interview with David Friedman about transitioning from coal to renewables:

The green energy revolution in South Africa has also started to kick off with the renewable energy independent power producer programme.

However this will come at a high cost.

South Africa is hoping to raise funds to roll out clean energy development as part of its plans to reduce carbon emissions and lessen the impact of global warming.

Greenpeace Africa has been campaigning for an energy revolution in South Africa since the launch of its Energy Revolution report in 2011.

She says commitment to implement policies is what’s needed.

“What you see in South Africa is the large scale renewable energy projects taking off, but they’re not taking off as much as they could be in our opinion because there are various barriers in place."

She says until the government sets policy around encouraging more rooftop solar devices, the industry won’t take off.

According to the Department of Energy’s 2010-2030 Integrated Resource Plan, the installation of rooftop solar power in South Africa is dependent on affordability for consumers.

“It was assumed for the purposes of estimating potential photovoltaic rollout in homes, that only households in living standard measure (higher) seven or higher would invest in rooftop photovoltaic and that (by 2020) only 50 percent of these would do so,” noted the policy document.

In the state of New York, renewable energy and clean economy is seen as a major opportunity for the state to move away from fossil fuels, which it views as expensive and inefficient.

This transition will be through a number of different methods. One of them is to incentivise utilities to finance new energy systems by changing the way utilities are compensated.

Watch a video clip of an interview with Richard Kauffamn, Chairman of Energy and Finance for New York State as he explains how this will work:

This is one intervention coming from the governor’s office in Manhattan. On the other side of the East river in Brooklyn is an incubator that’s helping to create the actual jobs.

The incubator provides companies with introductions to investors and other market stakeholders who can help grow their business.

Pat Sapinsley says young companies need a lot of help. “We can help them find customers, investors. We help them with their pitch and understand what their market is,” she said.

Watch a clip from an interview with Pat Sapinsley about the Urban Future Lab:

Currently the incubator hosts a number of companies.

Watch a clip with Kyle Walsh of Project Economics as he explains how being part of the incubator has helped their company grow:

“Most houses in the US were not built in the last couple of years so they have rotting insulation and old boilers and cracks and draughts, and all of that is signs of energy waste,” says Anika Wistar-Jones.

She says houses can save between 20 – 40 percent on their energy bills by being more energy efficient by just, “putting in a little bit of extra insulation, sealing up the cracks and replacing their old boiler (geyser).”

She says people find the construction costs prohibitive if they aren’t there to help facilitate it.

Watch a clip from an interview with Anika Wistar-Jones about job creation opportunities in helping Americans to be come more energy efficient:

While there is some competition with other contractors who also do energy audits, Wistar-Jones says their unique offering is that they help people pay for the work through savings on their energy bills.

“That’s something that nobody else has figured out how to do and it makes a huge difference in the viability of a project,” she said.

Ecogy Solar, is another company with a desk in the incubator. It develops small-scale distributed solar projects on the top of schools, non-profit organisations and private businesses.

Watch a clip of an interview with Jack Bertuzzi where he discusses the challenges facing clean energy companies entering a market dominated by the fossil fuel industry:

Investment incentives, innovation and a greater sensibility of sustainability are just some of the ways the US has found a way to make renewables sound like a success story in terms of job creation and more environmentally friendly development.

Dan Whitten of the Solar Energy Industries Association says solar energy will have a competitive advantage in the future as commodity prices fluctuate:

Only time will tell if South Africa will be able to do the same, but with a target of 300,000 jobs by 2030, policy changes and widespread awareness of sustainable energy is needed sooner rather than later.

*Please note this was a sponsored trip. eNCA journalists were guests of the US Embassy in South Africa.