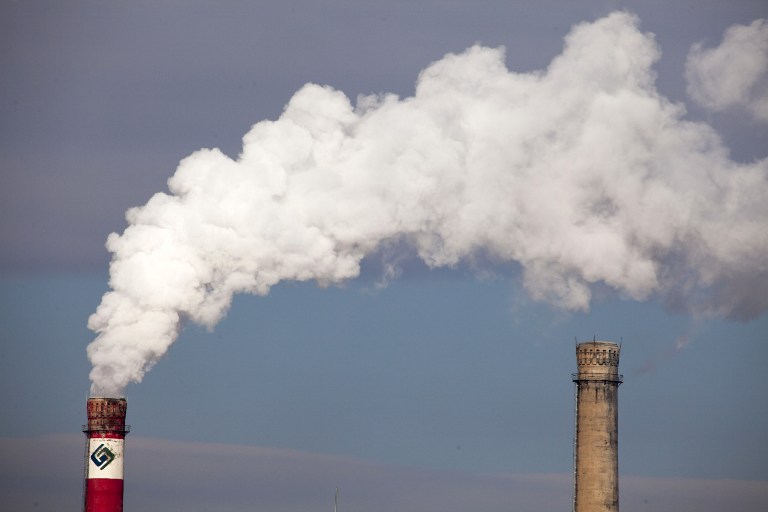 Smoke is discharged from a chimney at a coal-fired power plant in Jilin city, northeast China's Jilin province, 28 October 2015.

PARIS - Human-driven climate change may have put the next ice age off by about 50,000 years, said scientists Thursday, highlighting our species&39; ever-more dominant influence on Earth&39;s natural cycles.

Carbon dioxide (CO2) concentrations in the atmosphere could override other influences to make this the longest inter-ice age period in Earth history, they wrote in the journal Nature.

Without human influence, the next ice age was probably about 50,000 years away anyway, wrote the team led by Andrey Ganopolski of the Potsdam Institute for Climate Impact Research in Germany.

But current trends of CO2 emissions from humans burning oil, coal and gas, "are already sufficient to postpone the next ice age for another 50,000 years," he said.
"The bottom line is that we are basically skipping a whole glacial cycle, which is unprecedented."

Ice ages are caused partly by changes in Sun exposure caused by natural variations in the Earth&39;s orbit, combined with the influence of planet-warming greenhouse gases in the atmosphere.

Temperate "interglacial" periods normally last about 20,000 to 30,000 years, according to scientists. Once every 400,000 years or so, an inter-ice age period will last longer than that.

The last ice age ended between 14,000 and 11,000 years ago, giving rise to the Holocene, Earth&39;s current geological period, which has been an unusually mild inter-ice age era.

The most recent part of the Holocene, following the Industrial Revolution, has become known as the Anthropocene -- the period when human activities started influencing Earth&39;s geological processes.

"It is mind-boggling that humankind is able to interfere with a mechanism that shaped the world as we know it," Ganopolski said in a statement.

The results matched the timing of the last eight ice ages, and were then used to forecast future ones.

To date, humans have added about 500 billion tonnes (gigatonnes or Gt) of carbon (C) to the atmosphere via carbon dioxide emissions.

The UN&39;s climate science panel has said the total must be limited to 1,000 Gt C if global warming is to be held in check at a relatively safe two degree Celsius (3.6 degrees Fahrenheit).
"In the 1,000 Gt C scenario, the probability of glacial inception during the next 100,000 years is notably reduced," the team wrote.

Human interference with the climate meant the current interglacial period could be the longest yet, the team said.

"Like no other force on the planet, ice ages have shaped the global environment and thereby determined the development of human civilisation," said PIK director Hans Joachim Schellnhuber.

"For instance, we owe our fertile soil to the last ice age that also carved out today&39;s landscapes, leaving glaciers and rivers behind, forming fjords, moraines and lakes.

"However, today it is humankind with its emissions from burning fossil fuels that determines the future development of the planet."

Commentators pointed out that while ice ages are by no means pleasant periods for life on Earth, the potential benefits of a delay were far outweighed by the short-term harms from global warming.

"The suppression of an ice age is not as directly significant as the enhanced warming of what would otherwise have been a gently cooling planet," said Chris Rapley of University College London.