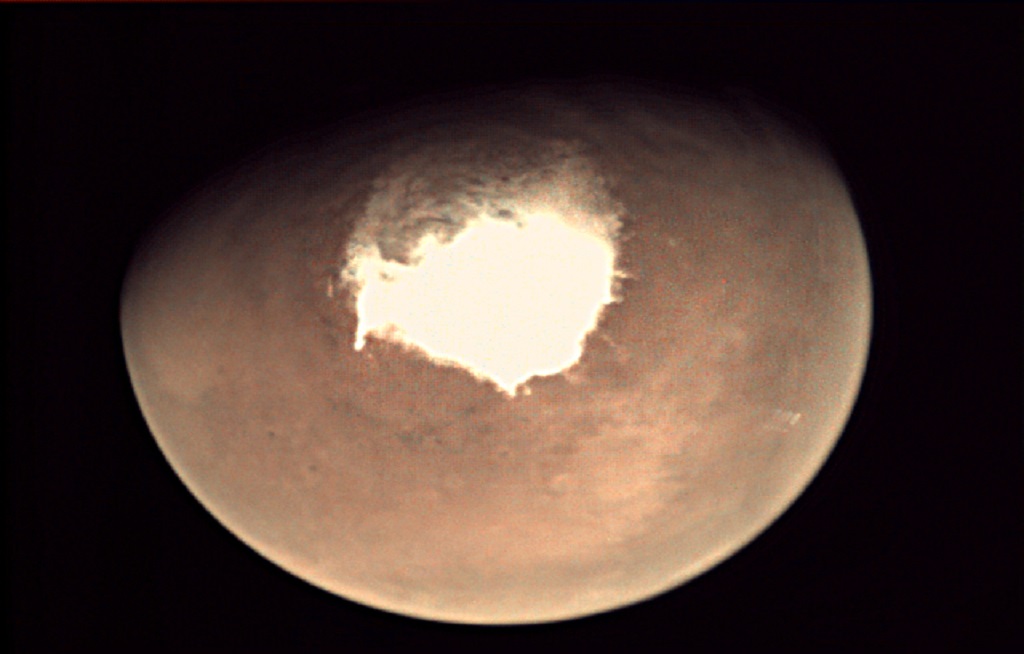 This file handout picture released on October 16, 2016 by the European Space Agency (ESA) shows planet Mars as seen by the webcam on ESAs Mars Express orbiter, as another mission, ExoMars, is about to reach the Red Planet.

PARIS – The crust that encases rocky planets and makes possible the emergence of life took shape on Mars earlier than thought and at least 100 million years sooner than on Earth, researchers said on Wednesday.

Analysing grains of the mineral zircon extracted from a Martian meteorite known as Black Beauty, they determined that the Red Planet&39;s outer layer hardened 4.547 billion years ago, only 20 million years after the birth of the Sun.

"Mars&39;s primary crust formation -- which is the end product of planet formation -- happened much faster than previously thought," said Martin Bizzarro, a scientist at Denmark&39;s Centre for Star and Planet Formation and senior author of a study published in Nature.

"Our results indicate that Mars could have had an environment with oceans, and potentially life, much earlier than Earth," he told AFP.

Water is considered to be an essential precursor for life, at least as we know it.

Mars was once much more Earth-like, with a thick atmosphere, abundant water and global oceans.

Up to now, mathematical models have suggested that the solidification of the Red Planet took up to 100 million years.

The new study tackles the question by examining a chunk of Mars that streaked into the Saharan Desert and was discovered in 2011.

The Black Beauty meteorite weighed 320 grams when found. The researchers secured 44 grammes of the precious space rock, and crushed five -- enough to extract seven bits of zircon that could be used in experiments.

By measuring the lead decaying from uranium that had been trapped in zircon as the young Mars&39;s molten magma hardened, the scientists were able to precisely date the crust from which the zircon formed.

"I&39;m glad we chose that strategy," said Bizzarro. "Zircon is like a time capsule."

There are two main models for the formation of planets.

In one, it occurs in stages, with small dust particles coalescing into "planetesimals" -- rock fragments ten to 100 kilometres in diameter -- that collide to form planetary embryos, and then planets, over a time scale of 50 to 100 million years.

According to a more recent model, planetary growth unfolds more quickly and is fuelled by so-called "pebble accretion", the layered accumulation of particles measured in centimetres and metres that are loosely bound with gases.

So you want to go to Mars? Getting there is hard, but surviving on the Red Planet is harder. Listen to episode one of the NASARocketRanch podcast to learn how we’re preparing to take humans to the Moon and then to Mars. Listen and subscribe: https://t.co/GBQgzJP5nU pic.twitter.com/0Rw9ri4zkJ

The new timeline suggests that something similar may have happened on our planet, but only after Earth was "reset" by the giant impact that formed the Moon about 4.4 billion years ago, Bizzarro said.

Mars is thought to have a dense metallic core with a radius of about 1,800 kilometres, consisting primarily of iron, nickel and sulphur.

The core is surrounded by a largely dormant mantle -- some 1,500 km thick -- made mainly of silicon, oxygen, iron and magnesium.

Finally, the crust averages about 50 km in depth, with a maximum of about 125 km. Earth&39;s crust averages 40 km, but is one-third the thickness of the Martian crust once planet size is taken into account.