MH370: What can we learn from forensic examination of flaperon? 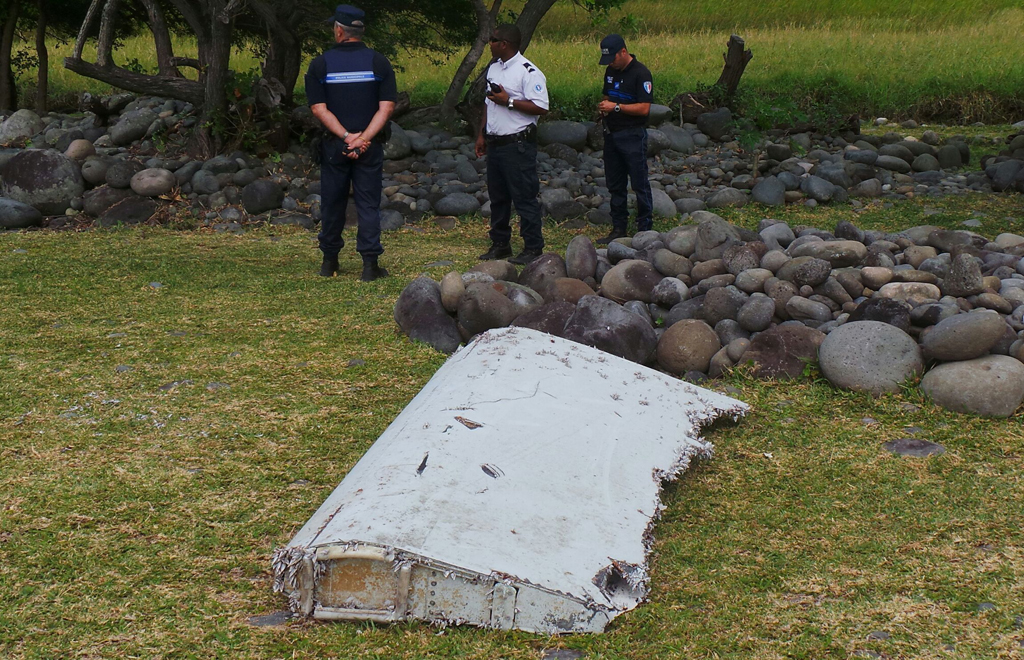 French gendarmes and police stand near a large piece of plane debris which was found on the beach in Saint-Andre, on the French Indian Ocean island of La Reunion, in this picture taken July 29, 2015.

SYDNEY - An investigation team in France is examining a Boeing 777 flaperon which washed up on the French island of La Reunion and that Malaysia says is from missing flight MH370.

Analysts and experts say the wing part could shed light on how the Malaysia Airlines passenger jet entered the ocean after it vanished with 239 people on board in March last year en route from Kuala Lumpur to Beijing.

Q. How will the forensic study of the debris tell us more about what happened to the plane?

A. Investigators will be examining the condition of the flaperon, which aviation experts say is not badly damaged. The analysis could also reveal how the wing part detached from the jet and therefore how the plane entered the ocean, as well as how violent the impact was. Barnacles on the flaperon could also point to where it may have drifted from.

.MH370 Surface currents are appropriate with drift of wing flap towards Africa pic.twitter.com/sG32dpwwhm

Q. Will it reveal anything about how the crash occurred?

A. Australian aviation expert Neil Hansford says the decent condition of the flaperon, apart from what appears to be some laminations on the trailing edge, might point to the aircraft entering the water in a "controlled-type crash", which could suggest it landed on the water when the fuel ran out rather than hitting the ocean in a traumatic manner.

Q. Could other plane debris still be floating on the ocean surface?

A. Australian Deputy Prime Minister Warren Truss and the Australian Transport Safety Bureau (ATSB), the agency leading the search, caution that drift modelling by the national science agency CSIRO indicates if there is more floating debris, it could be anywhere across the vast Indian Ocean. Hansford says given the wing part is made from a composite material -- carbon fibre -- rather than heavy metal, the flaperon from the other wing could still be afloat. The head of the aviation programme at Australia&39;s Central Queensland University Ronald Bishop says the discovery could at least prompt a closer look at debris that washes up in the La Reunion region that otherwise would not receive any attention.

(Pictured: Johnny Begue, a member of a local shore cleaning association, poses on July 30, 2015 at La Reunion, with the remains of a suitcase. Image: AFP PHOTO / Linfo.re/Antenne Runion)

Q. How important is the flaperon discovery in tracing the location of the main debris field?

A. Jakarta-based aviation consultant Gerry Soejatman says the discovery is a boost that the searchers need, proving they are not looking for the plane in the wrong area. Australian authorities say the drift modelling shows that material from the current search area could have been carried to La Reunion, among other locations. However, they add that reverse modelling to determine where the debris may have drifted from was almost impossible, and have reaffirmed their confidence that the main debris field is in the current search area.

Q. How much closer does the discovery bring us to solving the world&39;s greatest aviation mystery?

A. Aviation analysts are cautious about how much the wing part could tell us about why the plane went missing. Hansford says what it can prove is that MH370 definitely crashed into the southern Indian Ocean, but why it went there in the first place can only be solved if and when the black boxes are recovered. Bishop notes that it took more than 70 years to find the wreckage of the Titanic, the liner that sank in 1912 in the Atlantic.

(Pictured: Sets of breakfast dishes from the sunken Titanic (1912) are shown in New York, 25 August 1987, in the position they were found by expedition Titanic 1987. Image: AFP)