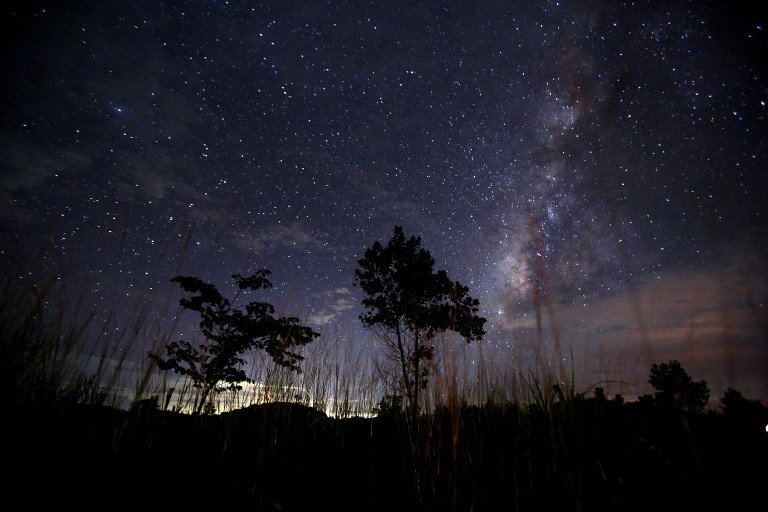 This long-exposure photograph taken on August 12, 2013 shows the Milky Way in the clear night sky near Yangon.

PARIS - Astrophysicists have detected a dozen black holes at the centre of our Milky Way galaxy, and said Wednesday there could be as many as 10,000.

The find provides the first evidence for a long-held theory that the massive black hole at the core of every large galaxy should be surrounded by thousands of smaller ones, they wrote in the science journal Nature.

"We observed a dozen black holes" around Sagittarius A, the black hole at the centre of the Milky Way, said study co-author Chuck Hailey, an astrophysicist at New York&39;s Columbia University.

"But this is the tip of the iceberg," he told AFP.

READ: More than a billion stars mapped in Milky Way

Black holes are generally "pretty impossible" to see, according to the physicist.

They feast on gas and dust in their vicinity, but the X-rays they burp are sporadic and hard to observe from Earth.

To try and overcome this difficulty, Hailey and a team decided to track down black hole "binaries" -- duos occasionally formed when a black hole captures a passing star and binds to it.

When the captured star has a low mass, the binary emits X-ray bursts that are weak but consistent and easier to detect.

The team observed the X-ray signatures of 12 black hole binaries within three light years of Sagittarius A.

Based on data from studying black holes closer to Earth, they extrapolated there must be about 500 binaries around our galaxy&39;s core in all, most of them too dim to observe.

"The final step comes from theorists, who estimate that only about one in 20 isolated black holes will eventually find a companion star" to form a binary, Hailey explained.

"So, multiplying by 20, we get around 10,000 isolated black holes" around Sagittarius A, he added.

READ: Is our Milky Way galaxy a zombie, already dead and we don&39;t know it?

Scientists had previously identified five dozen black holes in the rest of the galaxy, further from the centre.

The biggest black holes have masses ranging from millions to billions of times that of the Sun.

"Our galaxy is quite normal, so if you see tons of black holes here, they must exist in the centres of most galaxies," said Hailey.

"We had no evidence for bunches of black holes before, and our estimates, based on the dozen we see, are consistent with our expectations. This is gratifying," he added.