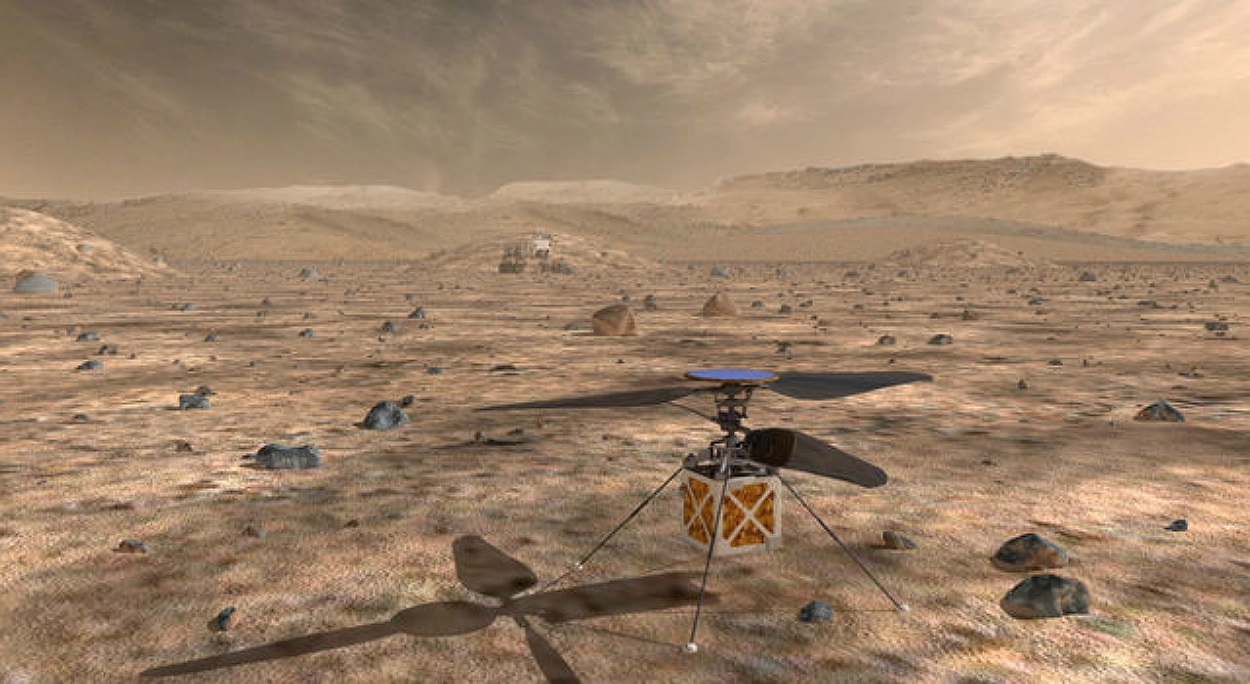 An illustration of Nasa's Mars Helicopter, a small, autonomous rotorcraft, which will travel with the agencys Mars 2020 rover mission, currently scheduled to launch in July 2020.

TAMPA, Florida – The US space agency, Nasa, said Friday it plans to launch the first-ever helicopter to Mars in 2020, a miniature, unmanned, drone-like chopper that could boost our understanding of the Red Planet.

Known simply as "The Mars Helicopter," the device weighs less than four pounds (1.8 kilogrammes), and its main body section, or fuselage, is about the size of a softball.

It will be attached to the belly pan of the Mars 2020 rover, a wheeled robot that aims to determine the habitability of the Martian environment, search for signs of ancient life, and assess natural resources and hazards for future human explorers.

Mars 2020 is planned for launch in July 2020 with an arrival on the surface of Mars expected in February 2021.

This week, we announced we&39;ll send a helicopter to Mars, showcased how technology enables exploration, and so much more. Take a look at the stories happening This Week at NASA: https://t.co/KMf33GzDwZ pic.twitter.com/a4aJkzVHF8

"Nasa has a proud history of firsts," said Nasa Administrator Jim Bridenstine in a statement.

"The idea of a helicopter flying the skies of another planet is thrilling."

No nation has ever flown a helicopter on Mars before.

The undertaking began in August 2013 as a technology development project at Nasa&39;s Jet Propulsion Laboratory.

In order to fly in Mars&39; thin atmosphere, the space helicopter has to be super light, yet as powerful as possible.

"The atmosphere of Mars is only one percent that of Earth, so when our helicopter is on the Martian surface, it&39;s already at the Earth equivalent of 100,000 feet up (30,500 metres)," she added.

Engineers built the copter&39;s twin, counter-rotating blades to "bite into the thin Martian atmosphere at almost 3,000 rpm – about 10 times the rate of a helicopter on Earth," said a Nasa statement.

The helicopter is equipped with "solar cells to charge its lithium-ion batteries, and a heating mechanism to keep it warm through the cold Martian nights."

Controllers on Earth will command the Mars Helicopter, which was designed to receive and interpret commands from the ground.

Plans are being laid for a 30-day flight test, with five flights going incrementally further each time, up to a few hundred yards (metres).

Its first flight calls for a brief vertical climb of 10 feet (three metres), followed by hovering for a half minute.

Nasa views the copter as a "high-risk, high-reward technology demonstration," it said.

If successful, it could be a model for scouting on future Mars missions, able to access places the human-built rovers cannot reach.

If it fails, it will not impact the Mars 2020 mission.

"The ability to see clearly what lies beyond the next hill is crucial for future explorers," said Nasa&39;s Thomas Zurbuchen, associate administrator for the science mission directorate.

"We already have great views of Mars from the surface as well as from orbit. With the added dimension of a bird&39;s-eye view from a &39;marscopter,&39; we can only imagine what future missions will achieve."