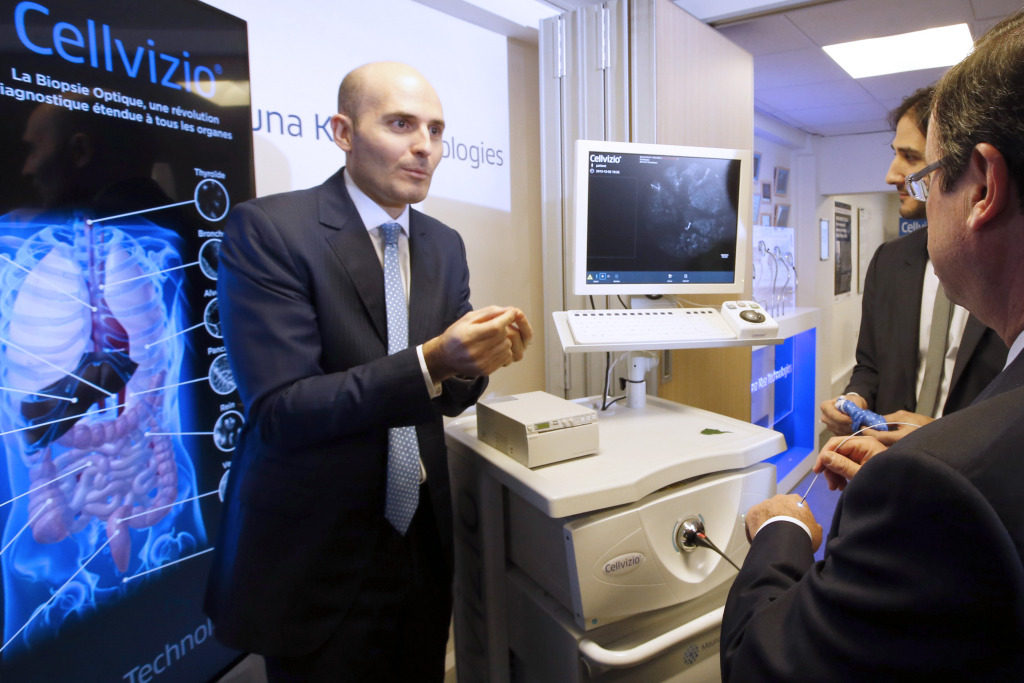 PARIS - Thanks to a laser-equipped mini-microscope developed by a French start-up, scientists have discovered a previously undetected feature of the human anatomy that could help explain why some cancers spread so quickly.

Nobody was looking for the interstitium, as the new quasi-organ is called, because no one knew it was there, at least not in complex form revealed in a study published this week.

As with many breakthroughs in medicine and science, it was -- to paraphrase Louis Pasteur&39;s oft-quoted dictum -- a case of chance favouring the prepared.

In 2015, a pair of doctors at New York&39;s Beth Israel Medical Center, David Carr-Locke and Petros Benias, found something unexpected while using the high-tech endoscopic probe to look for signs of cancer on a patient&39;s bile duct.

There on a screen, clear as day, was a lattice-like layer of liquid-filled cavities that did not match anything found in the anatomy chapters of medical school textbooks.

"These have no obvious correlate to known structures," they noted dryly in the journal Scientific Reports.

And then the mystery deepened.

The doctors showed the images to a pathologist, Neil Theise, who used a thinly sliced fleck of tissue removed from the patient to prepare the kind of glass slides scientists have been peering at with microscopes for centuries.

But the novel layer of tissue simply wasn&39;t there -- or at least it wasn&39;t visible.

Sacha Loiseau, founder and director of Mauna Kea Technologies, which made the camera-equipped probe that had revealed the phantom tissue, explained why.

"The classic microscope on a lab bench magnifies dead tissue from a biopsy that has been dehydrated and treated with chemicals," he told AFP.

The meshwork of liquid bubbles visible in the patient&39;s body, in other words, had pancaked in the slides like a collapsed building, leaving hardly a trace.

"This made a fluid-filled tissue type throughout the body appear solid in biopsy slides," Theise said in a statement.

"Our research corrects for this to expand the anatomy of most tissues."

The probe bundles some 30,000 optic fibres topped by a camera barely bigger than the head of a pin. Lasers light up the tissue, and sensors analyse the reflected pattern.

"We have reinvented the microscope so that it can be inserted into the body of a patient to observe living tissue in its natural environment," said Loiseau.

The result is a virtual, in-vivo biopsy.

The newly found network of fluid-filled pockets -- held in place by collagen proteins, which are stiff, and more flexible elastin -- may act like a shock absorber preventing tissue tear as organs, muscles and vessels go through their daily motions, the researchers said.

Once they knew what to look for, the scientists found interstitium throughout the body: below the skin&39;s surface, lining the digestive tract, in the lungs and urinary tract, and even surrounding arteries and veins.

Layers long thought to be dense, connective tissue, it turned out, were in fact interconnected and fluid-filled compartments.

Described as a "highway of moving fluid," the meshwork "may be important in cancer metastasis," the study suggested.

Scientists have long known that half the fluid in the body is found within cells, and about 14 percent inside the heart, blood vessels and lymphatic system.

The remaining fluid is "interstitial", or between the cells, and the new study argues that the interstitium should be considered as an organ in it&39;s own right -- indeed, one of the largest in the body.

Organ or not, "this finding has potential to drive dramatic advances in medicine, including the possibility that the direct sampling of interstitial fluid may become a powerful diagnostic too," said Theise.