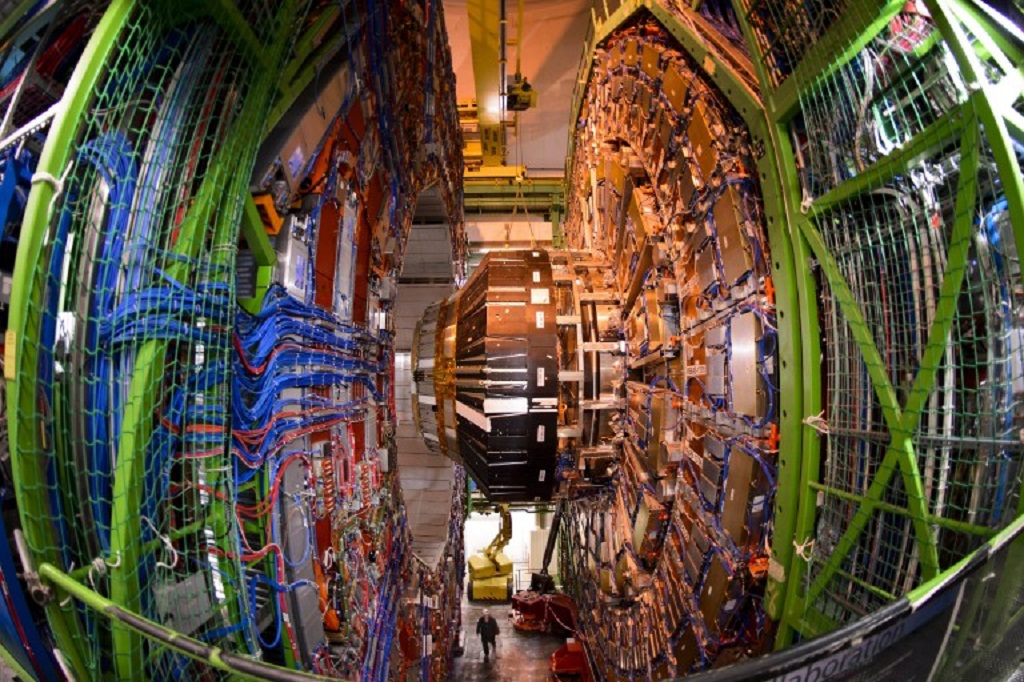 The Compact Muon Solenoid, a general-purpose detector at CERN's Large Hadron Collider (LHC) in Meyrin, near Geneva. A weasel shut down the world's most powerful particle smasher when it wandered onto a 66,000-volt transformer and caused a short circuit.

PARIS - When the Universe arose some 13.7 billion years ago, the Big Bang generated matter and antimatter particles in mirroring pairs. So the reigning physics theory goes.

Yet everything we can see in the Cosmos today, from the smallest insect on Earth to the largest star, is made of matter particles whose antimatter twins are nowhere to be found.

On Wednesday, physicists at Europe&39;s massive underground particle lab said they have taken a step closer to solving the mystery through unprecedented observation of an antimatter particle they forged in the lab -- an atom of "antihydrogen".

"What we&39;re looking for is (to see) if hydrogen in matter and antihydrogen in antimatter behave in the same way," said Jeffrey Hangst of the ALPHA experiment at the European Organisation for Nuclear Research (CERN).

Finding even the slightest difference may help explain the apparent matter-antimatter disparity and would rock the Standard Model of physics -- the mainstream theory of the fundamental particles that make up the Universe and the forces that govern them.

But, somewhat disappointingly, the latest, "most precise test to date", has found no difference between the behaviour of a hydrogen atom and that of an antihydrogen one. Not yet.

"So far, they look the same," Hangst said in a video prepared by CERN.

The Standard Model, which describes the makeup and behaviour of the visible Universe, has no explanation for "missing "antimatter.

It is widely assumed that the Big Bang generated pairs of matter-antimatter particles with the same mass but an opposite electric charge.

Trouble is, as soon as these particles meet, they annihilate one another, leaving behind nothing but pure energy -- the principle that powers imaginary spaceships in "Star Trek".

Physicists believe matter and antimatter did meet and implode shortly after the Big Bang, which means the Universe today should contain nothing but leftover energy.

Yet, scientists say that matter, which makes up everything we can touch and see, comprises 4.9 percent of the Universe.

Dark matter -- a mysterious substance perceived through its gravitational pull on other objects -- makes up 26.8 percent of the Cosmos, and dark energy the remaining 68.3 percent.

Antimatter, for all intents and purposes, does not exist, except for rare and short-lived particles created in very high-energy events such as cosmic rays, or produced at CERN.

Some theoretical physicists believe the "missing" antimatter may be found in hitherto unknown regions of the Universe -- in anti-galaxies comprised of anti-stars and anti-planets.

At ALPHA, physicists are trying to unravel the mystery using simplest atom of matter -- hydrogen. It has a single electron orbiting a single proton.

The team creates hydrogen mirror particles by taking antiprotons left over from the CERN&39;s high-energy particle collisions and binding them with positrons (the twins of electrons).

The resulting antihydrogen atoms are held in a magnetic trap to prevent them from coming into contact with matter and self-annihilating.

The team then studies the atoms&39; reaction to laser light.

Atoms from different types of matter absorb different frequencies of light, and under the prevailing theory, hydrogen and antihydrogen should absorb the same type.

So far, it seems they do.

But the team will hope for differences to emerge as the experiment is fine-tuned.

"Although the precision still falls short for that of ordinary hydrogen, the rapid progress made by ALPHA suggests hydrogen-like precision in antihydrogen (measurements)... are now within reach," said Hangst.