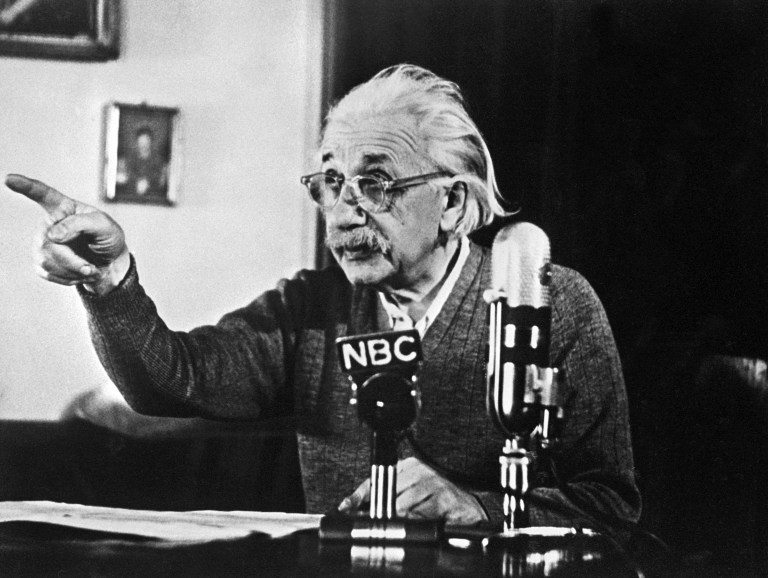 German-born Swiss-US physicist Albert Einstein, author of the theory of relativity, at a conference 14 February 1950 in Princeton. On June 30, 1905 Einstein published an article that introduced his theory of special relativity.

NEW YORK - Researchers who helped detect gravitational waves for the first time, confirming part of Albert Einstein&39;s theory in a landmark moment in scientific history, will share a US$3 million Special Breakthrough Prize, according to the prize&39;s selection committee.

In February, a team from the Laser Interferometer Gravitational-Wave Observatory (LIGO) announced a pair of giant laser detectors had measured the tiny ripples in space and time first theorized by Einstein a century ago, capping a decades-long quest.

Einstein predicted gravitational waves as part of his seminal theory of general relativity, which explained gravity as distortions in both space and time caused by bodies of matter.

LIGO&39;s three founders - Rainer Weiss, Kip Thorne and Ronald Drever, who dedicated much of their careers to gravitational wave detection - will share $1 million. More than 1,000 contributors to the project will also split $2 million equally.

"That&39;s much more modern and much more the way that physics gets done," said Weiss, a professor emeritus at the Massachusetts Institute of Technology, of the decision to honor the entire team. "You can&39;t credit just the three of us for this."

Researchers said the gravitational waves came from the collision of two black holes, the extraordinarily dense objects that Einstein&39;s theory also predicted. The black holes, both many times the mass of the sun, were located 1.3 billion light years from Earth.

The waves should unlock new ways to understand the cosmos, including black holes, neutron stars and the mysteries of the early universe.

"For us to spend basically a half-century since the three of us started working in this field, to have it actually be pulled off successfully in the manner we dreamed - it was really remarkable and wonderful," said Thorne, who is retired from the California Institute of Technology. "I&39;m forever grateful to the team that got it done."

The winners will be honored at a December ceremony, when the regular annual awards for physics, life sciences and mathematics will also be announced. The Special Breakthrough Prize can be conferred at any time to mark "an extraordinary scientific achievement."