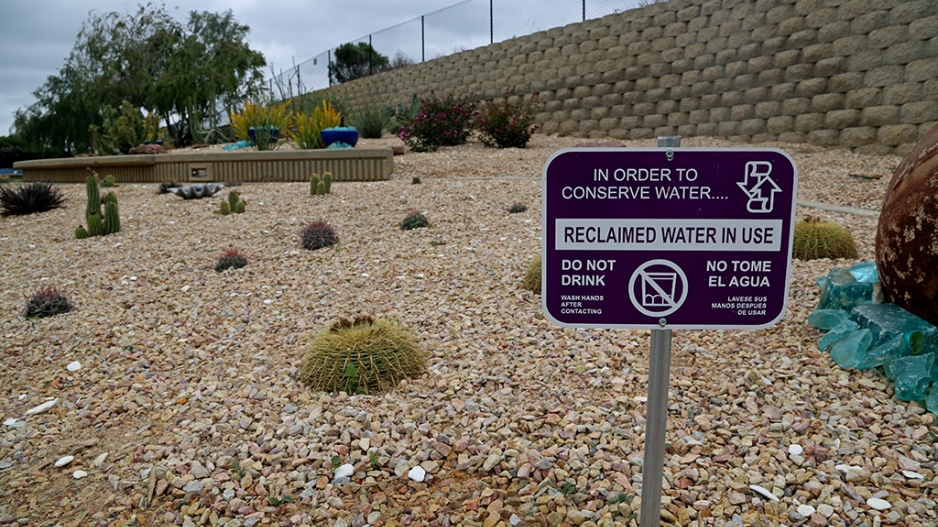 A common sign in San Diego indicating that recycled water is being used for irrigation in this drought-resistant garden.

SAN DIEGO, CALIFRONIA – Only 32km from the Mexican border, San Diego is home to 1.38 million people and is the eighth largest city in the United States.

The population is growing but natural resources aren’t.

“We have to change how we’ll respond to these events,” says Cody Hooven, chief sustainability officer of the City of San Diego.

Below is a list of seven ways public entities like the local water authority, a university and the city are becoming more sustainable through energy efficiency, drought resilience and recycling.

Hooven says the city has adopted a climate action, which could set a new national standard for the United States.

“We’ve set goals to reduce our carbon footprint by half by 2035 and to increase our energy goals to have 100 percent renewable energy for the entire city," she said.

Solar energy is the dominant source of renewables in San Diego but the city also has large wind farms, geothermal and biogas.

READ: How can SA get on the solar-coaster ride?

The renewable energy revolution has also helped to create a large number of jobs in the sector.

“We have about 25,000 clean-economy jobs in the region and our economy is doing really well right now,” said Hooven.

Distributed generation systems, or microgrids, are also helping large institutions like the University of San Diego, California generate its own electricity.

Byron Washom, director of strategic energy initiatives at the university, says a microgrid is like an orchestra.

“There’s a lot of different instruments in an orchestra, all playing in harmony, and in that harmony there’s generation, there’s energy storage, there’s electric vehicles and there’s demand and we also have imports from the grid. They play in harmony of production and consumption all the time, 24/7, continuously,” he said.

The university has a student body of 28,000 and with its microgrids is able to generate 80 percent of its own power needs annually.

“At any given time the total peak demand is 47 megawatts of power - that’s equivalent to a community of about 100,000 people,” said Washom.

Washom says the microgrids give them six attributes they cannot get if they are wholly reliant on the grid.

Watch a video clip from an interview with Byron Washom, director of strategic energy initiatives at the University of California, San Diego, as he explains what these are:

A key feature of the microgrid is a fuel cell, which uses renewable fuel (from a waste water treatment plant), has almost zero emissions and takes up the area the size of a tennis court.

While the initial outlay cost of a fuel cell might be high, Washom says distributed generation is an investment in sustainability.

Watch a video clip from an interview with Byron Washom, director of strategic energy initiatives at the University of California, San Diego as he explains why distributed generation is more sustainable in the long-term.

Watch a clip from an interview with Robert Freling below:

Another example of energy efficiency at the University of California, San Diego is the electric vehicles programme.

For just $80 (R1,141) a month over three years, students can rent a 2016 Daimler smart-for-two electric-drive vehicle. There are charging stations all over campus.

“We use electric vehicles as a source of energy storage as well,” said Washom.

San Diego imports as much as 80 percent of its water. This is transported to the different plants in the city for treatment.

At the Alvarado treatment, plant-imported and local water is treated through a multi-step process and stored in tanks before it goes to homes.

“We’re essentially at the end of a pipeline. A lot of water comes from either northern California or from the Colorado river,” says John Helminksi, assistant director of the public utilities department, City of San Diego.

An array of solar panels is generating 14 percent of the plant&39;s energy demands. The solar panels are stored on top of the water tanks.

Helminksi says the solar energy helps the city’s public utilities department to save on cost and energy usage.

“It gives us a good opportunity to shave peak power during the day when the cost of energy is higher. As a utility company this provides an opportunity for us to shave that peak and bring down the overall cost of that energy,” he said.

Watch a video with John Helminski, assistant director of the public utilities department, City of San Diego as he explains how the solar array  supports the the treatment plant.

California is just coming out of a five-year  drought. Climate resilience and water security are a major concern for San Diego.

Parts of Lake Hodges in Southern California have completely dried up after years of drought eNCAeco pic.twitter.com/CLJwIbSIYW

The city’s water authority has come up with a plan to purify wastewater and convert it into drinking water, which is expected to provide a third of the city’s water needs by 2035.

“Our ultimate goal is to try and reduce our reliance on water from northern California and have a localised, more drought-proof water source,” said Helminksi.

Currently only eight percent of waste water from San Diego homes is recycled;the rest is dischared into the ocean.

The city has a demonstration facility, which purifies water using the actual technology that will be used in the purification.

Since June 2011, the city has produced 3.7 million litres of purified water every day at its demonstration Pure Water Facility.

“We’re expecting to save about 378 million litres a year once it&39;s fully up and running, instead of using that 100 million gallons (378 million litres) of drinking water, so we’re excited,” says Valerie Fanning, environmental compliance officer at the University of California, San Diego.

While the cost of installing the purple pipelines, which carry recycled water, was high, she says the investment is worth it.

“The cost of the recycled water is much less than drinking water so we will make up that cost pretty quickly by using recycled water for all those millions of gallons,” she says.

Watch a clip from an interview below with Valerie Fanning, environmental compliance officer at the University of California, San Diego, about how they are saving water:

At the Miramar Greenery, city residents are encouraged to dump their green or garden waste, which is recycled into eight different products like compost, different wood chips and mulch.

These products are sold back to residents at a low cost and residents can get 1.5 cubic metres of compost or mulch for free.

Food waste from pre-approved commercial venues is also accepted at the facility.

Food scraps are processed into compost, which can help to improve soil texture and increase nutrients and water holding capacity.

The Miramar landfill and greenery is actually situated on land owned by the Department of Defence, which is leased to the City of San Diego.

Next to the recycling site is the Marine Corps Air Station Miramar air base.

Aside from doing test flights with some of its fighter planes it also gets its power from renewable sources.

Methane gas and carbon dioxide drawn from a covered landfill is drawn through a pipeline and then pumped to a compressor station, where it is pressurised and converted to energy.

This landfill gas to energy system is helping the Mirarmar airbase get 50 percent of its energy from renewables.

Hooven says that in the next 10 to 20 years there will be a major growth in smart city innovation and sustainability.

Watch a video clip of an interview with Cody Hooven below: