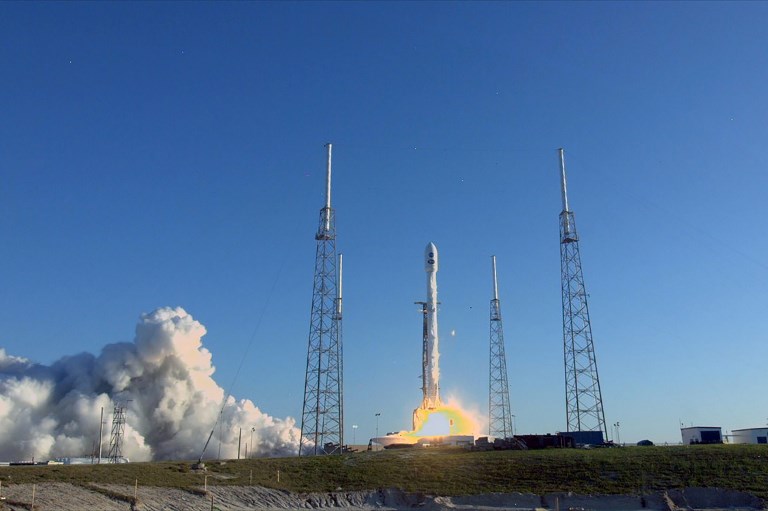 An international crew of astronauts celebrated Thanksgiving on Thursday with a special 'spacegiving feast' of rehydrated foods.

TAMPA – NASA on Wednesday blasted off its newest planet-hunting spacecraft, TESS, a $337 million satellite that aims to scan 85 percent of the skies for cosmic bodies where life may exist.

The washing machine-sized spacecraft is built to search outside the solar system, scanning the nearest, brightest stars for signs of periodic dimming. These so-called "transits" may mean that planets are in orbit around them.

Right on schedule, solar arrays have been deployed on @NASA_TESS, which will give the spacecraft the power it needs to search for worlds beyond our solar system. Watch: https://t.co/AabMjJGEZt TESS pic.twitter.com/z7fHKTchM9

TESS is expected to reveal 20,000 planets beyond our solar system, including more than 50 Earth-sized planets and up to 500 planets less than twice the size of the Earth, NASA said.

Its discoveries will be studied further by ground- and space-based telescopes for signs of habitability, including a rocky terrain, a size similar to Earth and a distance from their sun -- neither too close nor too far -- that allows the right temperature for liquid water.

"The stories of these planets will continue on, long after their detection," Martin Still, TESS program scientist, said on Wednesday.

Four eyes on the sky

"It was incredible. It was so emotional," said Natalia Guerrero, a TESS researcher at the Massachusetts Institute of Technology, in an interview on NASA TV after the launch.

She was part of a team that built four cameras that serve as the spacecraft&39;s eyes.

"TESS&39;s four cameras are tiny but mighty," she said.

"They are only about four inches (10 centimetres) across, the lenses. They could fit in a mailbox. But they are so powerful. You could have an entire constellation, like Orion, in the field of view of one of these cameras."

Both use the same system of detecting planetary transits, or shadows cast as they pass in front of their star.

The @NASA_TESS spacecraft has successfully separated from the @SpaceX Falcon 9, which carried this planet hunter from Earth to space. Next up: Solar arrays will be deployed! Watch: https://t.co/AabMjJGEZt TESS pic.twitter.com/tFQsigtGzy

The new spacecraft will focus on nearby exoplanets, those in the range of 30 to 300 light-years away.

Kepler&39;s trove of more than 2,300 confirmed planets outside our solar was impressive, but most were too distant and dim to be examined further.

"One of the many amazing things that Kepler told us is that planets are everywhere and there are all kinds of planets out there," said Patricia "Padi" Boyd, director of the TESS guest investigator program at NASA&39;s Goddard Spaceflight Center.

"So TESS takes the next step. If planets are everywhere, then it is time for us to find the planets that are closest to us orbiting bright nearby stars, because these will be the touchstone system."

The Hubble Space Telescope, launched in 1990 aboard the space shuttle, and the James Webb Space Telescope, scheduled to lift off in 2020, should be able to reveal more about planets&39; mass, density and the makeup of their atmosphere -- all clues to habitability.

The initial launch attempt Monday was scrubbed about two hours before planned takeoff, so that SpaceX engineers could perform extra checks on the rocket&39;s navigation systems.

On Wednesday, the rocket performed flawlessly.

The @NASA_TESS spacecraft has successfully separated from the @SpaceX Falcon 9, which carried this planet hunter from Earth to space. Next up: Solar arrays will be deployed! Watch: https://t.co/AabMjJGEZt TESS pic.twitter.com/tFQsigtGzy

Less than 10 minutes after launch, the rocket&39;s first stage returned to an upright landing on a drone ship in the Atlantic Ocean, marking SpaceX&39;s 24th touchdown of a rocket booster.

Next, TESS will spend two months making its way into the correct orbit. Its first scientific data is expected in July.

"We are thrilled TESS is on its way to help us discover worlds we have yet to imagine, worlds that could possibly be habitable, or harbor life," said Thomas Zurbuchen, associate administrator of NASA&39;s Science Mission Directorate in Washington.

"With missions like the James Webb Space Telescope to help us study the details of these planets, we are ever the closer to discovering whether we are alone in the universe."