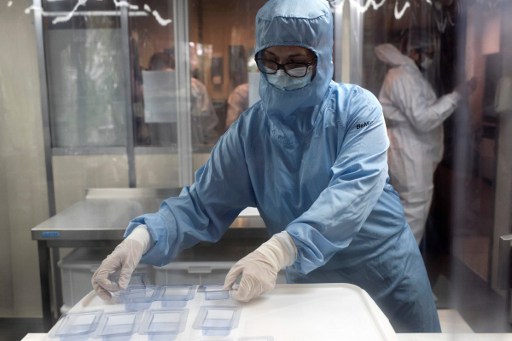 A laboratory operator displays containers for bio-glass used to simulate bones or as a bone substitute which is indicated in regenerative medicine, in Villeurbanne, central-eastern France, on June 14, 2016.

PARIS - The first people to reach the Americas could not have passed through the ice sheet-cleaving inland corridor long thought to be the entry point of humans to the continents, according to a study published Wednesday.

More likely, the New World pioneers of our species, probably some 15,000 years ago, inched along a Pacific coastline free enough of ice to support life-sustaining flora and fauna.

The exact route and timing of this maiden migration remains conjecture, the researchers said.

But what is certain, according to findings reported in the journal Nature, is that the textbook version of that passage is wrong.

For decades, scientists favoured a scenario something like this.

About 14,500 years ago, a 1,500-kilometres north-south corridor opened up between the Cordilleran ice sheet -- which covered roughly what is today the Canadian province of British Colombia -- and the much larger Laurentide ice sheet, which smothered the rest of Canada.

The Ice Age was slowly giving way, but still held the region in its grip and -- draining the oceans by dozens of metres -- forged a land-bridge between Eurasia and Alaska.

About a thousand years later, according to this theory, the first Ice Age humans moved through this elongated inland gateway to found new cultures to the south.

Among them was the Clovis people, who first show up in the archaeological record more than 13,000 years ago.

This storyline presumes, of course, that these path-breaking early people found sustenance along the way.

And that&39;s where the theory falls apart, according to Mikkel Pedersen, a researcher at the Centre for GeoGenetics at the University of Copenhagen, and lead author of the study.

"The earliest point at which the corridor opens for human migration is 12,600 years ago," he told AFP.

While the passage may have been free, "there was absolutely nothing before this date in the surrounding environment -- not plants, not animals."

Nothing, in other words, that would have allowed humans to feed themselves during a long, hard slog between towering cliffs of ice.

Other research showing that humans might have arrived in the Americas at least 14,500 years ago -- and perhaps a couple of thousand years before that -- had already begun to undermine the ice sheet corridor hypothesis, forcing experts to look more closely at the possibility of a coastal route.

Pedersen and colleagues now appear to have closed the door on the inland route for good.

The innovative methods they used for reconstructing the late Ice Age ecosystem was crucial.

Rather than hunt for DNA traces of specific plants or animals buried in sediment -- the standard approach -- Pedersen&39;s team used what is called a "shotgun" method, cataloguing every life form in a given sample.

"Traditionally, we have been looking for specific genes from a single or several species," he explained.

"But the shotgun approach really gave us a fantastic insight into all the different trophic" -- or food-chain -- "layers, from bacteria and fungi to higher plants and mammals."

The researchers chose to extract sediment cores from what would have been a bottleneck in the inland corridor, an area partly covered today by Charlie Lake in British Columbia.

The team did radiocarbon dating, and gathered samples while standing on the frozen lake&39;s surface in winter.

Up to 12,600 years ago, the environment was almost entirely bereft of life, they found.

But the ecosystem evolved quickly, giving way within a couple of hundred years to a landscape of grass and sagebrush, soon populated by bison, woolly mammoth, jackrabbits and voles.

Fast-forward a thousand years, and it had transitioned again, this time into a "parkland ecosystem" dense with trees, moose, elk and bald-headed eagles.

The findings open "a window onto ancient worlds" and are a cornerstone in a "major reevaluation" of how humans arrived in America, said Suzanne McGowan of the University of Nottingham, commenting in Nature.

They also make the coastal passage scenario much more likely, she added.

"If there ever was an ice-free corridor during the Last Glacial Maximum," James Dixon of the University of New Mexico wrote in a recent study, "it was not in the interior regions of northern North America, but along the Northwest Coast."

A "biologically viable" passage stretched along that coast from the Bering Land Bridge to regions south of the glaciers starting about 16,000 years ago, he reported in the journal Quaternary International.