Team of 'tiny' scientists forage for fossils at Cradle of Humankind 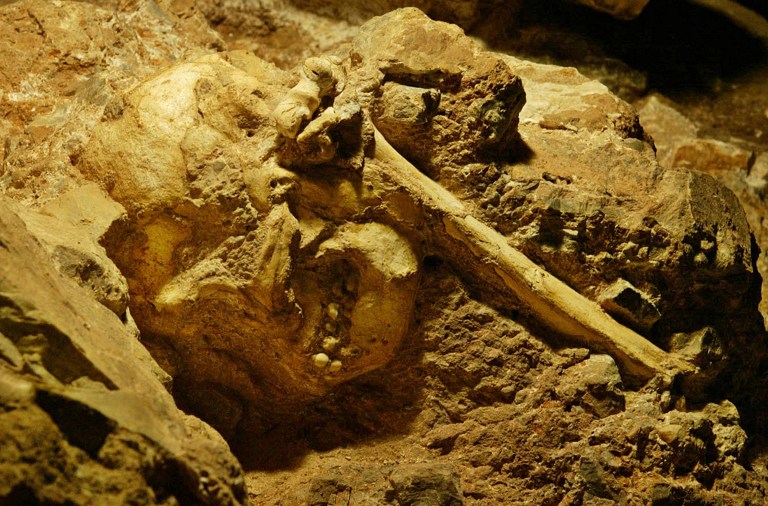 A picture taken 01 September 2002 shows "Littlefoot", an almost complete hominid skeleton belevied to be some 3.3 million years old, in a rock at the Sterkfontein Caves, about 40 km north of Johannesburg.

JOHANNESBURG - A new excavation for fossils will begin in the next few days at the Cradle of Humankind, north-west of Johannesburg, the University of the Witwatersrand (Wits) said on Wednesday.

It said six specialised archaeological cavers had arrived in the country to take part in the exploration.

"An international team of researchers will, in the next few days, begin excavations on a new site that may contain evidence of early human fossil remains in the cradle... some 40km north Johannesburg," Wits said in a statement.

"Professor Lee Berger, a research professor in human evolution from the evolutionary studies institute at [Wits] and a National Geographic explorer-in-residence, will direct the expedition at rising star cave."

Berger is best known for the discovery of Australopithecus sediba at the Malapa site at the cradle, one of the most significant palaeoanthropological discoveries of recent times.

The latest discovery was made by an expedition team sent by Berger to search the deepest recesses of the caves in the cradle.

"The exploration team leader Pedro Boshoff and his two assistants Steve Tucker and Rick Hunter were able to access a chamber deep underground that is nearly impossible to get to," said Berger.

They found some significant fossils on the surface of the cave floor.

The first step of the expedition would be to get the fossils out of the cave and thoroughly study them before any pronouncement could be made.

"We do not know as yet what species of hominin we have found, and we will not speculate," said Berger.

"Our aim is to get the fossils out carefully, study them, compare them to other fossil material from around the world and then proceed to analyse and describe them."

This was part of the scientific process and, if all went well, they hoped to publish their findings late in 2014.

The main difficulty was that the opening of the cave structure, 30 metres underground, would accommodate only people with a chest size of 18cm and less.

This had led Berger to call on his social media friends to help him find "tiny and small, specialised cavers and spelunkers with excellent archaeological, palaeontological and excavation skills".

Within days, Berger had a list of 57 qualified candidates, of which six scientists were selected to participate in the excavation, all of them women.

"These are highly-trained scientists with caving experience from the US, Canada, and Australia, who are currently in South Africa preparing for the excavation," he said.

"Only a limited number of people will be allowed to the access-restricted site, as one of my key priorities is the safety of our scientists and researchers."

Members of the Speleological Exploration of SA would assist the expedition.

Updates on the excavations would be provided through a blog managed by National Geographic.