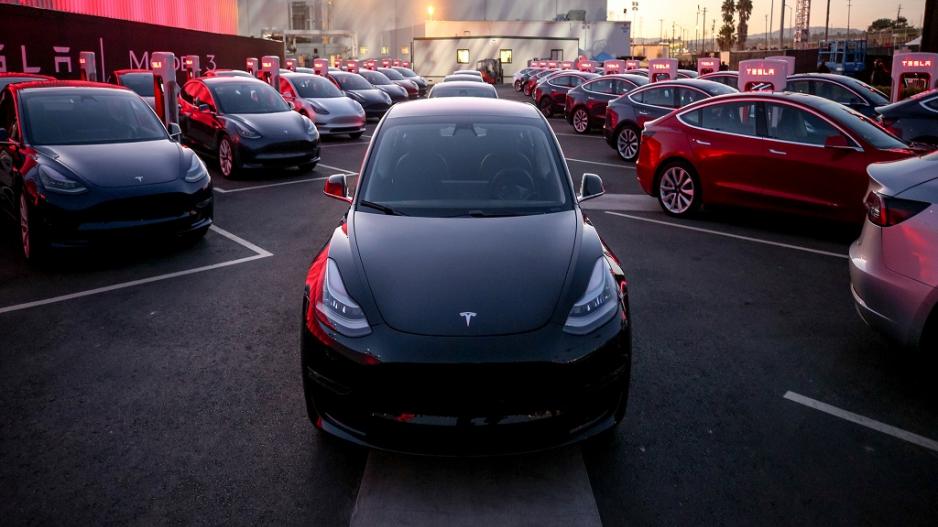 Tesla Model 3 cars are seen as Tesla holds an event at the factory handing over its first 30 Model 3 vehicles to employee buyers at the companys Fremont facility in California, U.S. July 28, 2017.

JOHANNESBURG - Tesla Inc Chief Executive Elon Musk on Friday pushed back the unveiling of the company’s big rig truck until mid-November, tweeting that the electric vehicle maker was diverting resources to fix production bottlenecks of its new Model 3 sedan and to help Puerto Rico.

Musk said Tesla’s Model 3 was “deep in production hell” echoing his own comments in July, when he showed off some of the first cars of that model.

The Model 3 could help Tesla approach its goal of becoming more of a mass market producer. Recent comments have tempered expectations about the speed of the increase in production, though.

Musk’s comments came after the close of stock trading on Friday. The company’s shares fell 0.8 percent in extended trading.

The Palo Alto, California-based company delivered just 220 Model 3 sedans and produced 260 in the third quarter. It had planned to produce more than 1,500.

Musk also tweeted the company was diverting resources to increasing battery production to help hurricane-hit Puerto Rico, where most residents remain without electricity.

Earlier this week Tesla reported that “production bottlenecks” had left it behind the planned ramp-up for the Model 3.

In response to a Tesla customer asking if he would get his car delivered this year, Musk tweeted, “December will be a big month, so probably, but it is impossible to be certain right now.”

A Wall Street Journal report said parts of Model 3 were being made by hand as recently as early September, adding to production delays.

Musk also said Tesla would reschedule the unveiling of its semi-truck to Nov. 16 as it focuses on fixing production issues tied to Model 3 and increases battery production for Puerto Rico.

The unveiling of the truck, called Tesla Semi, has been delayed for the second time this year. Musk had initially said the truck would be unveiled in September, but he later rescheduled it to late October.

“Semi specs are better than anything I’ve seen reported so far. Semi eng/design team work is aces, but other needs are greater right now,” Elon replied to a twitter user who asked him about the specifications of the semi-truck.

Reuters in August reported that the truck would have a working range of 200-300 miles.

Earlier in the day, Musk said the company will send more battery installers to Puerto Rico to help restore power after Hurricane Maria knocked out power on the island over two weeks ago.