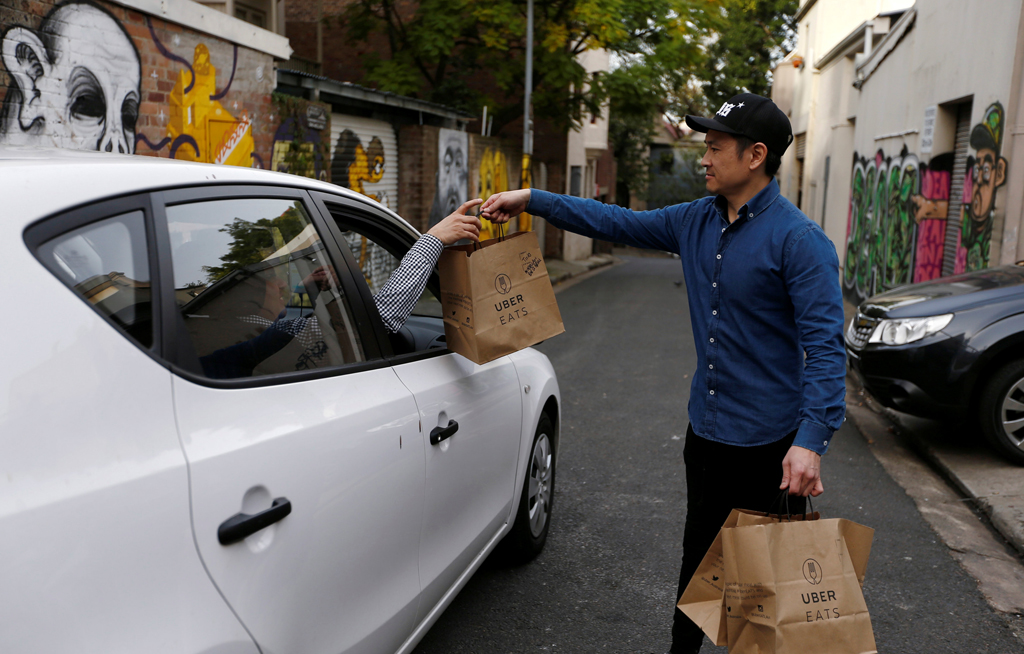 An Uber driver takes delivery of bags of donuts destined for a customer via Uber Eats in Sydney.

SYDNEY - After three decades running McDonald&39;s Corp restaurants, Tony Plunkett thought he knew everything about flipping burgers for a profit, and last year went out on his own with a start-up franchise in the Australian city of Melbourne.

But he soon learned his industry was being turned inside out by the Internet, and he has since signed on with UberEats, the food delivery service of Uber Technologies Inc. Last month, he opened Australia&39;s first restaurant - a leased kitchen in a shuttered Sydney night-club - run entirely on deliveries by the US ride-sharing firm.

"When you&39;re running your own delivery service, you need your driver to come back and that&39;s dead time," the founder of On It Burgers told Reuters. "You don&39;t need the Uber guy to come back, he just keeps going."

Just as the most established food order-taking websites of Just Eat Plc, GrubHub Inc and Germany&39;s Delivery Hero Holding GmbH prod restaurants to start in-house delivery operations, the arrival of UberEats is seeing a new wave of participants dispensing with both tables and drivers completely.

The shift to outsourcing everything but the kitchen is not just shaking up cost-conscious restaurants. It&39;s a direct threat to the order website companies themselves, which have been on rapid acquisition sprees in a race to dominate markets from Berlin to Manila.

Some firms are even trying to convince restaurants to dispense with sit-down tables and use their centralised kitchens to dispatch food to increasingly mobile consumers.

In Australia, a high minimum wage has restaurants even more anxious to cut overheads, and global players are flocking in to find a new growth market.

And competition is heating up, with visits to the UberEats app up nearly 60 percent from April to July, its first four months in Australia, according to website analysis provider SimilarWeb.

"We&39;re quite immature in a bunch of cities in Australia, so obviously we&39;re very much in acquisition mode there," Adrian Blair, Just Eat&39;s chief operating officer, said on a recent earnings call.

London-based Deliveroo, which recently raised $275 million and saw improved traffic to its Australia website, also plans to scale up its bicycle delivery operations, posing an extra challenge to those order-taking sites which rely on restaurants having their own drivers.

"People are being more conservative than they were," said Deliveroo&39;s Australia manager Levi Aron. "Given that climate, we&39;re able to have a situation where we have investors who are re-investing in the business, (which) does show that there&39;s something going on here."

Toon Gyssels, CEO of Delivery Hero&39;s main Australian acquisition Foodora, said the market was "especially appealing because of the food culture on the supply side ... but also on the demand side: people appreciate good food and will pay money for that, and they also want to pay for convenience."

All this competition has boosted monthly online food orders in Australia to above one million - giving firms the scale to expand and helping the restaurant industry grow at three times the rate of overall retail sales in April-June.

And the online food delivery sub-sector is growing faster still, up at least 39 percent for each of the first five months of this year, according to Morgan Stanley.

But an island market of 24 million people can quickly become crowded.

"I wonder if in the long term it&39;s sustainable," said James Eling, founder of Melbourne-based restaurant consultancy Marketing4Restaurants. The lure of replacing the cost of drivers with Uber&39;s mark-up delivery costs "will definitely enforce a sanity check," he added.

Just Eat&39;s purchase of Menulog carried a price-earnings multiple of 371, more than 12 times the 2015 level of tech buyout valuations across Asia, which are themselves the highest in a decade, according to Deloitte.

Many financial analysts describe an investment bubble in food delivery markets globally. Such eye-popping valuations can only be justified if an eventual dominant player can consolidate, creating the necessary scale and pricing power, they say.

Early last year, Indian restaurant website aggregator Zomato bought US rival Urbanspoon, marking its entry into North America and Australia. It said then it planned to hire 300 people in Australia and extend into online order-taking. It has since quit North America and shut down the Urbanspoon brand. It is taking orders in Australia, but has hired just 85 staff. A spokesperson said Zomato sees Australia "contributing to a larger share of our revenue in the longer term".

Stock analysts have also softened in their enthusiasm for the market, saying it&39;s unpredictable.

Broker Jeffries said in a recent note it was keeping a "finger in the air" on Just Eat&39;s earnings outlook in Australia given Menulog&39;s limited operating history. It also trimmed its Australia forecasts, which "may have been a bit too bullish ... previously".

Plunkett, the burger entrepreneur, meanwhile, is already planning breakfast and late-night menus to keep the orders coming in around the clock.

Ultimately, he said, he would like to take his kitchen-only business in the opposite direction and, if costs permit, set up a regular shopfront with tables and chairs.