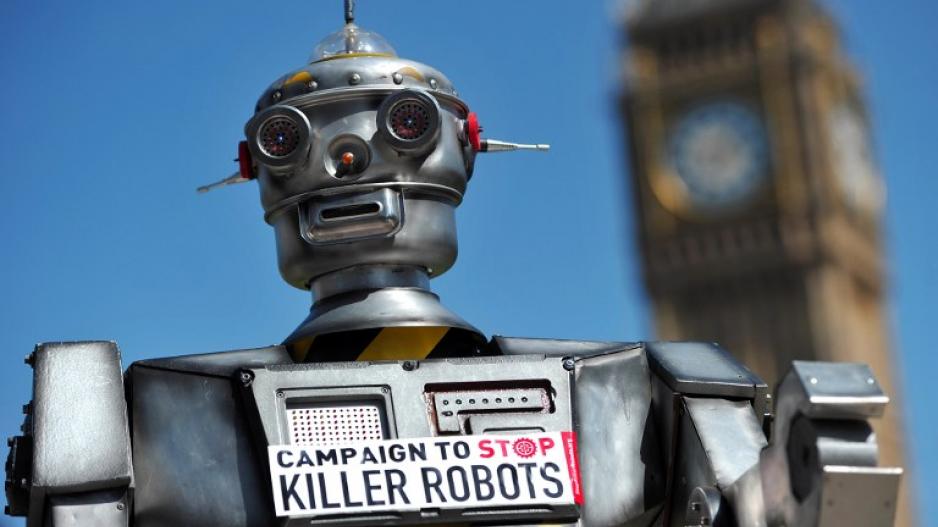 A mock "killer robot" is pictured in central London during the launching of the Campaign to Stop "Killer Robots," which calls for the ban of lethal robot weapons that would be able to select and attack targets without any human intervention.

GENEVA - Armies of Terminator-like warriors fan out across the battlefield, destroying everything in their path, as swarms of fellow robots rain fire from the skies.

That dark vision could all too easily shift from science fiction to fact, with disastrous consequences for the human race, unless such weapons are banned before they leap from the drawing board to the arsenal, campaigners warn.

"All too often international law only responds to atrocities and suffering once it has happened. You have the opportunity to take pre-emptive action and ensure that the ultimate decision to end life remains firmly under human control," he said.

That was echoed by the International Committee of the Red Cross, guardian of the Geneva Conventions on warfare.

"The central issue is the potential absence of human control over the critical functions of identifying and attacking targets, including human targets," said Kathleen Lawand, head of the ICRC&39;s arms unit.

"There is a sense of deep discomfort with the idea of allowing machines to make life-and-death decisions on the battlefield with little or no human involvement," she added.

The four-day meeting in Geneva aims to chart the path towards more in-depth talks in November.

"The only answer is a pre-emptive ban," he added.

UN-brokered talks have yielded such bans before: blinding laser weapons were forbidden by international law in 1998, before they were ever deployed on the battlefield.

Automated weapons are already deployed around the globe.

The best-known are drones, unmanned aircraft whose human controllers push the trigger from a far-distant base. Controversy rages, especially over the civilian collateral damage caused when the United States strikes alleged Islamist militants.

Perhaps closest to the Terminator-type killing machine portrayed in Arnold Schwarzenegger&39;s action films is a Samsung sentry robot used in South Korea, with the ability to spot unusual activity, talk to intruders and, when authorised by a human controller, shoot them.

Other countries at the cutting edge include Britain, Israel, China, Russia and Taiwan.

As revolutionary as gunpowder

But it&39;s the next step, the power to kill without a human handler, that rattles opponents the most.

Experts predict that military research could produce such killers within 20 years.

"Lethal autonomous weapons systems are rightly described at the next revolution in military technology, on par with the introduction of gunpowder and nuclear weapons," Pakistan&39;s UN ambassador Zamir Akram told the meeting.

"In the absence of any human intervention, such weapons in fact fundamentally change the nature of war," he said, warning that they could undermine global peace and security.

The goal, diplomats said, is not to ban the technology outright.

"We need to keep in mind that these are dual technologies and could have numerous civilian, peaceful and legitimate uses. This must not be about restricting research in this field," said French ambassador Jean-Hugues Simon-Michel, chairman of the talks.

Robotics research is also being deployed for fire-fighting and bomb disposal, for example.

Campaigner Noel Sharkey, emeritus professor of robotics and artificial intelligence at Britain&39;s University of Sheffield, underlined that autonomy is not the problem in itself.

"I have a robot vacuum cleaner at home, it&39;s fully autonomous and I do not want it stopped. There is just one thing that we don&39;t want, and that&39;s what we call the kill function," he said.

Supporters of robot weapons say they offer life-saving potential in warfare, being able to get closer than troops to assess a threat properly, without letting emotion cloud their decision-making.

But that is precisely what worries their critics.

"If we don&39;t inject a moral and ethical discussion into this, we won&39;t control warfare," said Jody Williams, who won the 1997 Nobel Peace Prize for her campaign for a land-mine ban treaty.