Virtual reality will change the world. Here's what parents need to know 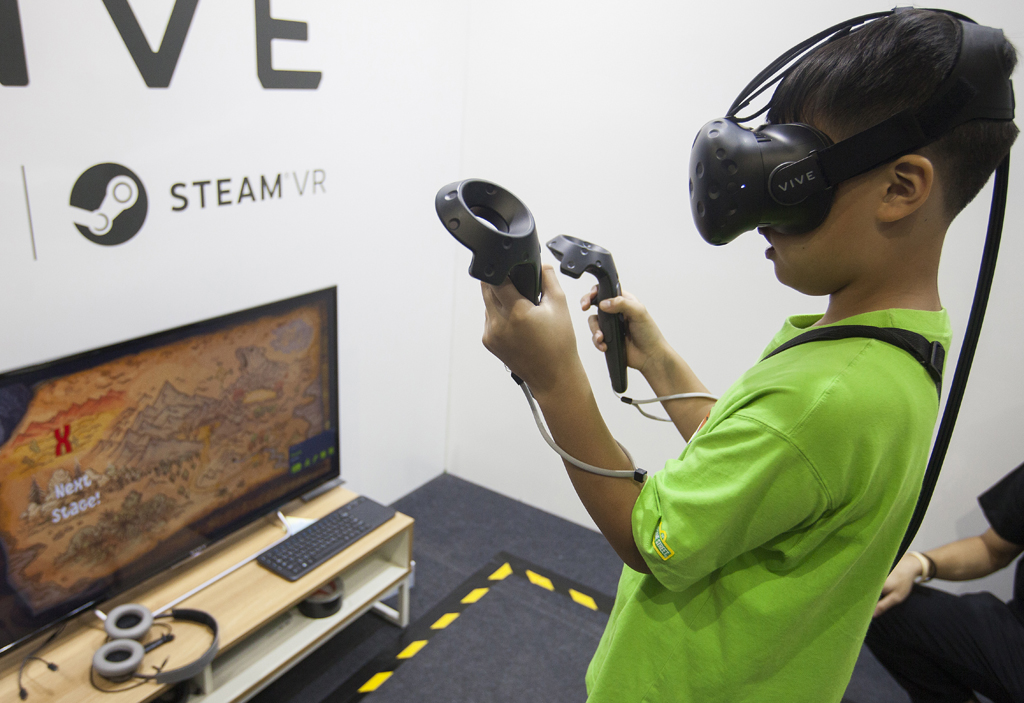 A child plays a virtual reality game at the Hong Kong Computer and Communications Festival 2016, in Hong Kong, China, 19 August 2016.

I’ve always been a nerd who loves technology and games. So when it emerged that virtual reality (VR) tech was becoming available to gamers, I was ecstatic.

Then something happened that gave me pause. A gamer and YouTuber named Mark Fishbach, aka Markiplier, shared his experience of playing an unfinished VR demo game. VR is a technology that creates a virtual environment. It is presented to our senses so you feel like you’re actually there. A host of technologies are used to account for cognition and perception. A VR headset takes over and re-represents visual surroundings – similar to what headphones do with audio.

Despite the game’s terrible graphics and unrealistic scenery, Markiplier got so scared playing it that he started crying and wanted to stop at various points.

Everything changed for me in that moment. If a 27-year-old man who plays horror games for a living can be terrified by an unrealistic game, VR may hold very real risks for its users - especially younger ones.

There is no doubt that VR is the next big thing: it will change the world. As it becomes more common and cheaper, it will be incorporated into everything from education, military training and research to criminal justice, and even therapy.

But for families with young children, it may be wiser to wait a little before leaping headlong into this new reality.

VR isn’t exactly new. There were attempts in the 1990s to make it mainstream. These failed because of technological drawbacks and enormous expense. But technology has evolved, making VR steadily more affordable and accessible.

VR’s power lies in the fact that the subconscious cannot differentiate between reality and the simulated environment you’re seeing. Your conscious mind might be aware that you’re just playing a game, but your subconscious re-calibrates itself to accept the new surroundings as real. It will initiate fight or flight and other psychological and physiological reactions in response to a perceived threat. This is why a VR user might duck at something that’s thrown at him in the game.

This description might alarm parents. But there’s no need to start burning VR headsets in the streets. VR and its near-neighbour augmented reality hold incredible promise.

Research has indicated that they might fight child obesity, autism, and even improve school grades.

But there’s a flip side. VR often draws comparisons with regular gaming. So, many of the concerns that have been raised historically against the gaming industry may warrant a second look in the context of VR.

Some experts are worried that VR desensitises users. This could be through violent games, or through exercises for military personnel in which soldiers train in simulated combat scenarios.

It could mean that a person is no longer as affected by extreme acts of behaviour, like violence. They may fail to show appropriate empathy or compassion. Some experts even claim that in some situations a desensitised user may actively seek out violent scenarios for a sense of power and for the adrenaline rush. This has been particularly noticed in those who play highly immersive games involving VR or take the form of first person shooter games.

Recent research denies this, suggesting that violent video games don’t influence kids&39; behaviour. Still, it’s important to remember that children under the age of 12 are experiencing significant psychological development. Games that are not age appropriate or take hours (more than three a day) to complete can have negative effects on them.

As VR tech becomes more readily available and starts spreading into other industries, there may be a rise in virtual reality addiction, that mirror video gaming addiction, but is potentially even more enticing.

These people will begin to blur the boundaries between real, augmented and virtual reality. Their real world life may suffer as a result.

PokemonGo is a good example. This can be considered an augmented reality game; it enhances reality rather than replacing it with a completely fabricated environment. It places things in reality that aren’t really there but can be perceived through the game. The hype around the game was immense - and was quickly followed by reports of people walking into traffic, getting fired or mugged, and even abandoning their children to chase Pokemons.

In this augmented world they neglected their real world surroundings and responsibilities.

The key to addressing this is similar to addressing any potential addiction: self-control. It’s vital to limit the hours spent playing, particularly when children are the gamers. Parents can treat the device as a reward for good behaviour. They can also restrict access if children go over the time limit or behave badly.

Many people behave totally differently in a virtual world. Researchers studied the effects of playing an avatar – a figure representing a person in a computer game – that has traits the user doesn’t. These might include height, weight, attractiveness and age. They found that people would behave in a manner associated with that trait. Other users would respond to an avatar with a specific trait similarly as they would in reality.

This could become an issue where VR avatars make users more inclined to be rude, crude, or even bully others. Children are especially vulnerable, with cyberbullying among teens on the rise.

How to manage kids and VR

Some experts have pointed out that it’s far too soon to suggest VR devices are harming children.

This isn’t surprising. VR is still too new for any of its long term effects, whether negative or positive, to be understood. For now, how can the parents of young gaming enthusiasts ensure that their children are playing it safe in the VR world?

Until we know more, parents should heed the age limits on VR devices. It’s also a good idea to limit playing time and to monitor what games your children are playing. Use the device as a tool to teach kids self-restraint and discipline – and keep an eye on the VR scene for any new developments.