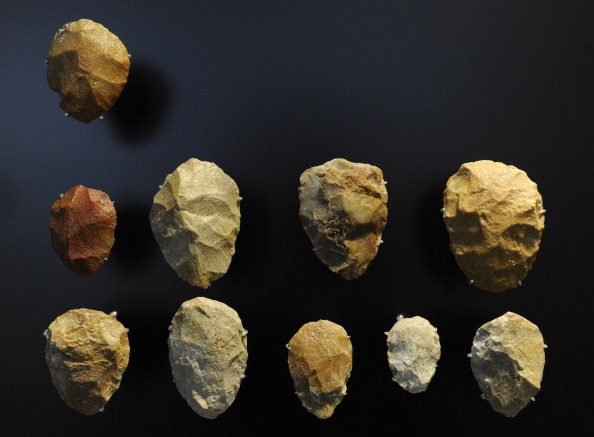 Stone tools. Our ancestors made them, some people still make them, and many species of extinct humans made them too. For more than three million years, fractured pieces of hard rock provided past people with a means to extract their livelihood from the environment.

Because stone is plentiful and cheap to acquire, stone tools were made in large numbers. And because it is so durable, it usually outlasts other traces of human activity. With the passing of time, everything from our thoughts and languages to clothes, food waste and even our own bones are inevitably erased. But stone tools have remained.

For this reason, stone tools have been integral to the way archaeologists have told the human story. We have used them to build models of adaptation, population size, trade networks and cultural identity.

The last of these is founded on the knowledge that stone tool manufacture was a skill taught over generations in culturally specific ways. Temporal patterns in stone tool form have thus been taken to reflect the appearance and disappearance of cultural groups, and spatial patterns to signal cultural contractions and migrations.

But there is a problem with using stone tools in this manner. There is a limited number of ways to break a rock, constrained by physical laws. Fracturing stone in ways that result in usable forms introduces further constraints. Consequently, and to a greater degree than any other item of material culture, stone tools are prone to convergence, or the chance manufacture of similar tools by unrelated populations.

Stone tools as a marker of human migrations

Despite these well-documented limitations, stone tools continue to be used to infer past migrations.

There are two reasons for this. First, we know that they retain some cultural information. Shared cultural systems are thus a plausible explanation for technological similarities in spatially separated occurrences.

Second, we often don’t have anything else to go on. Across most of the globe few other items of material culture survive. At the same time, human skeletal material and ancient DNA are extremely hard to come by. And while modern DNA can help us identify population changes in time it struggles to pinpoint where they occurred in space.

The role of ‘Nubian’ cores

These factors coalesce when we try to understand when and by what routes early modern humans left Africa. While the scientific community is increasingly certain that Homo sapiens evolved in Africa 200 000 years ago, we still don’t know for how long we remained an exclusively African species. Certainly we had entered Europe by 40,000 years ago and Australia probably 50,000 years ago, but these are at best youngest ages and not all are accepted.

An important addition to this puzzle was published in 2011. Researchers working in Arabia reported on finding what are known as “Nubian cores” dating roughly 100,000 years ago. Nubian cores are a specific type of artefact used to make stone points. They are named for their association with the Nubian region of northeast Africa, where they where made by early modern humans between 125,000 and 70,000 years ago.

If the Nubian cores found in south-west Asia reflect an information system shared with the contemporary inhabitants of the greater Nile Valley, these artefacts would constitute the earliest evidence for modern humans outside of Africa. This would also push back the date for our first excursions into the rest of the world. One important thing about Nubian cores is that their occurrence has always been constrained to north-east Africa, making their distribution a plausible candidate for a shared cultural system.

For the last five years we have inspected caves and open air sites around the Doring River in the eastern Cederberg area located in the south-west of South Africa. This is some 6000km south-west from the typical Nubian belt.

At a site named Uitspankraal 7, the team identified what appeared at first glance to be Nubian cores. To confirm this unexpected find, we returned to the site to carry out detailed analysis of these cores and the surrounding artefacts last year. In the end, our analyses confirmed that the cores perfectly matched the key identifying characteristics of the Nubian.

As part of the same project, excavations were done 30km away at the site of Mertenhof. In dense artefact layers deep in the cultural sequence, a team led by our colleague Aara Welz revealed large numbers of stone points and a single example of a Nubian core, with two more examples added in this year’s excavation. The time period to which these artefacts relate is known as the post-Howiesons Poort, and is well-dated to around 50 000 - 60 000 years ago at sites across southern Africa.

Do these Nubian artefacts reflect a great migration of north-east Africans to the continent’s southern tip? Or are they the result of convergence in the face of finite possibilities?

For several reasons, we think that they reflect convergence. First, we could find no evidence of Nubian-like cores in the 6000 km between the classic Nubian belt and south-west Africa. If there was a great migration, it is one that left no evidence in the intervening space. Second, our artefacts likely occur some 15,000 to 60,000 years too late for the typical Nubian.

To put that in perspective, it would require people to maintain the same technology across 750 to 3000 generations, all the while moving from the Sahara across central Africa and down into the temperate zones of southern Africa.

Broken bits of rock can only tell us so much

If we accept that our findings reflect convergence on the Nubian, what does this mean for the timing of modern human’s first tentative steps out of Africa? While it doesn’t falsify the Arabian-Nubian connection, it complicates the ready equation of a set of artefact types with a set of people.

It remains plausible that modern people coming from Africa around 100,000 years ago made the cores identified in south-west Asia. But our data also reinforces how fiendishly difficult it is to track the movements of early modern humans when broken bits of rock provide the bulk of our data.

That two sets of artefacts in different places look remarkably similar has drawn archaeologists into discussions of migrations for more than 100 years. In the end, however, they have often found that probability, playing out over thousands of kilometres and years, had by chance thrown up the same forms twice (or more).

The emergence of Homo sapiens as a global species – and the associated questions of where, when and why – is a central issue in understanding the nature and origins of human-ness. Presently, all of these questions remain open. Despite the substantial current research effort, we suspect that many more twists still remain in the human story.

This article was based on a paper in the journal PLOS One.