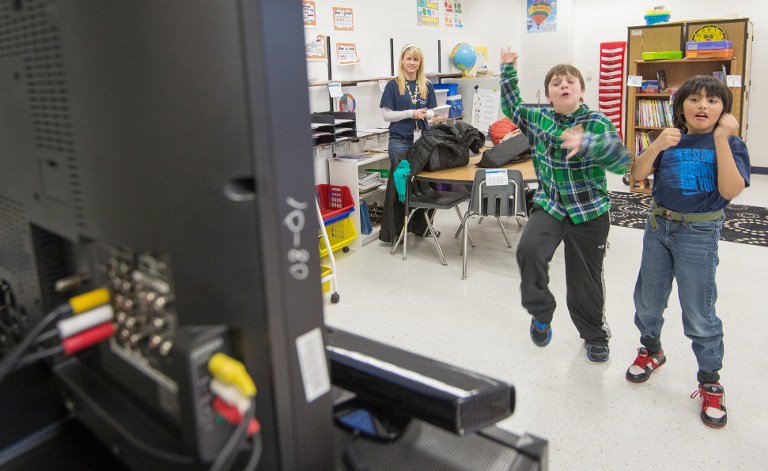 ASHBURN, United States - The game over, a beaming Sawyer and Michael, both 10, cheer and give each other a high-five.

It is a small but significant reaction that experts say shows how children with autism can benefit from playing some computer games.

The Steuart W. Weller Ashburn Elementary School in Virginia is one of the specialised centers in the United States testing Microsoft&39;s popular Xbox game console, equipped with "Kinect."

With Kinect, launched by Microsoft in 2010, kids can play videogames without controllers. Instead, they use their bodies to dictate the action on the screen, courtesy of a motion detector.

Kinect was not specifically designed for children with autism, but experts say the device is proving beneficial for some with the disability.

"The positive high-fives, the cheering for each other, that was something that wasn&39;t seen as often, and it became a regular thing for Sawyer," Anne-Marie Skeen, a specialist teacher at the Virginia school, said.

Autism, a range of complex neurodevelopment disorders that typically appear during the first three years of a person&39;s life, now affects an estimated one child in 88 in the United States.

It impacts on a person&39;s ability to communicate and interact with others. With the help of schools such as Skeen&39;s, autism is treatable, but children do not simply "outgrow" it.

Side by side, Sawyer Whitely and Michael Mendoza bend and stoop, directing the action on the screen -- a boat careering down a rushing river.

As many children would be, they are captivated, and when they finish, they look exhilarated.

"It looks like you are in the game but you&39;re not," said a breathless Michael, adding innocently: "I love boats."

Ashburn&39;s teachers have been working with Kinect for two years, and are homing in on the lack of communication that typically characterises autism.

"Communicating with each other, giving each other directions, giving compliments... I can teach social skills and communication with board games and with other games but the students are so much more motivated to take part in games like this, and with games like the Kinect we get a lot more out of them," said Lynn Keenan, a teacher and trainer.

"It&39;s much easier to build the skills when they are motivated to learn. We&39;ve found some pretty impressive results.

"There are many tools but there are few that hold that kind of motivational value that a tool like this does, so it&39;s much easier than to build the skills because they are motivated to take part in it."

"Because they are so motivated by the game, they are more likely to engage and follow through on instructions that they might provide or they might create a situation where they actually do it on their own, which is what we really want to see the kids do," he explained.

He takes the example of "Happy Action Theater," a game in which the avatar shoots at fireballs or kick rocks.

"And multiple kids can play in the same area at the same time, so for those kids that have social interactions challenges and have difficult times sharing the same space, it gets them in the same space and it&39;s the very first step you want them to achieve."

Kinect could also be used to detect signs of autism.

For example, researchers at University of Minnesota have installed it to spot signs of hyperactivity, one of the signs of autism.

The use of Kinect for children with the disorder is catching on, said Andy Shih, of Autism Speaks, an autism science and advocacy organisation, adding that at about $150, Kinect is an affordable accessory that offers "encouraging results."

"Many families are exploring its potential," he said, stressing: "We have a neutral position.

"We advocate for more researches and more datas. Right now the information is very preliminary.

"It&39;s very difficult for any one product to be the miracle cure, the magic bullet that will meet all the needs of all individuals."