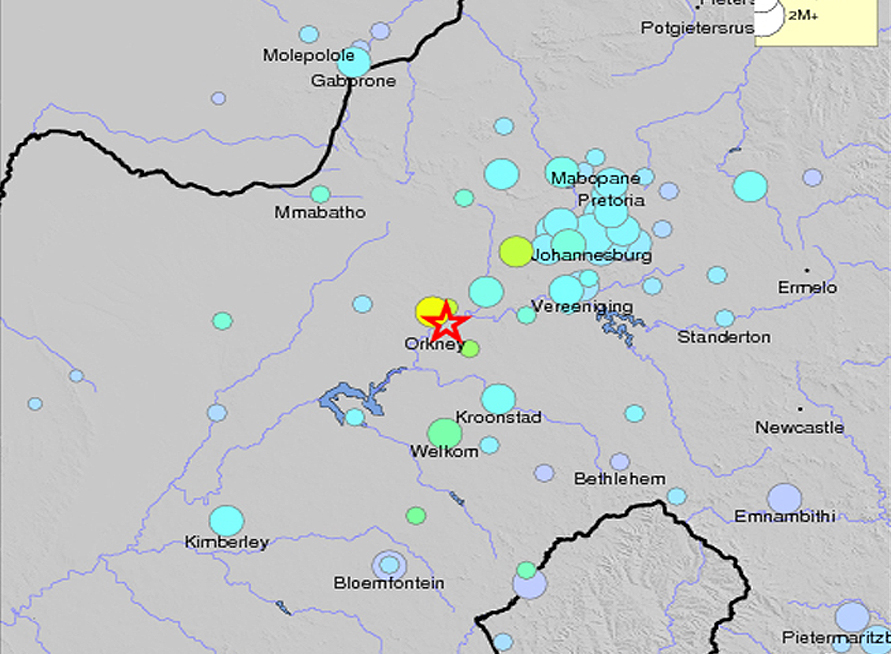 Raymond Boardman told eNCA that he felt the quake on his farm in Buckingham, Ventersdorp in the North West Province.

"Everything started moving in the house and it just kept going on and on. We all ran outside -  thats how scary," he added.

"It was the worst I haveevet experienced in my 58 years on the farm."

"Then we all evacuated... ran out," she said. "We were asked to stand far from the building. At that point we had obviously seen on Twitter, that it had been felt in Joburg and felt around the city, so we figured out that it was a tremor."

An employee at the Orkney Gold Club Pro Shop also called eNCA with his experience. He said the initial quake lasted for about three minutes, and was far more intense than anything else he had experience previous.

"A couple of clubs fell off the racks. I was very scary," Alfred Moseki said.

He said residents of Orkney were used to experiencing minor tremors, but he had not felt anything this strong before.

Moketi said he and a colleague rushed out of the shop and stood outside until they felt it was safe to return to the store. He felt a second, smaller tremor a few minutes later.

Anita George-Kuhn from Douglasdale near Fourways in Johannesburg said the ceiling fans in her double-storey house "were shaking violently" and the experience was accompanied by a "rumbling sound."

She said her husband was on the phone to someone in Pretoria at the time, who confirmed it also was felt there, but only after it had stopped on the Jo&39;burg side. It was reportedly also experienced for a longer period in Pretoria.

Map of South Africa showing Twitter mentions from around the country in the wake of today&39;s quake. (Stats and information are as collated by @RobinMeisel from @Lightstone_sa - provider of comprehensive data, analytics and systems.)

Note: The red dot in the centre of the country are South Africans whose geo location Lightstone was unable to verify.

Stats collated by @RobinMeisel from @Lightstone_sa show that within 10 minutes, seven international seismic monitoring twitter accounts placed tweets over the epicenter of the quake. Two tweets were made from Stokkiesdraai Street in Orkney.

Did you feel the earth move? Tell us about it in the comments section below, or Tweet us @eNCANews, using the hashtag SAQuake.