Heavy Rain for the North Eastern Parts of South Africa 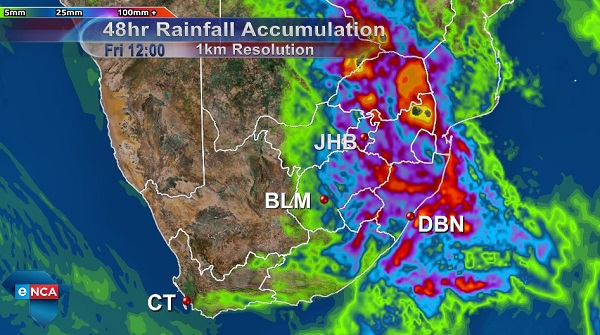 South Africa experienced a hot and dry summer with months of unusually low rainfall and scorching hot temperatures. This week significant, and even heavy rainfall is expected, mainly over the north eastern parts of SA. There has already been an increase in thunderstorm activity this week, with a large amount of tropical moisture being pushed in over the interior. The Eastern Cape and KwaZulu-Natal received significant rainfall on Monday and Tuesday. A band of thundershowers has developed over the north eastern and eastern parts on Wednesday, bringing significant rainfall to the area.

The South African Weather Service has issued a watch for heavy rain leading to possible localized flooding for Gauteng, most of Mpumalanga, southern Limpopo, north eastern North West, and the north western part of KwaZulu-Natal, for Wednesday. Gauteng can expect most of their rainfall overnight on Wednesday, into early Thursday morning. Weather models indicate that the wet weather will continue for the north eastern interior all the way through to the weekend, but with higher rainfall amounts occurring over Limpopo and Mpumalanga.

Rainfall from this week should make a noticeable difference to the extended dry conditions, and a notable contribution to dam levels. However, a high rainfall rate is expected, where large amounts of rain falls over a short period of time. This prohibits efficient infiltration and increases run-off, leading to possible localized flooding. Storm water drains in urban areas often become blocked, especially when rainfall events are below average. This results in a greater amount of run-off with large amounts of water channeling in the roads. This also increases the risk of localized urban flooding.