CAPE TOWN - A big winter storm, still gathering steam in the Atlantic ocean, is set to hit the Cape Provinces from Tuesday morning.

The storm comprising of two intense cold fronts will bring between 50 and 70mm of rain in 24 hours to the western mountain regions of the Western Cape through Tuesday, while more than a 100mm of rain is possible in the Hottentots Holland mountains near Stellenbosch.

Fairly good rains are also expected in the evening for the rest of the Western Cape and parts of the Northern and Eastern Cape. 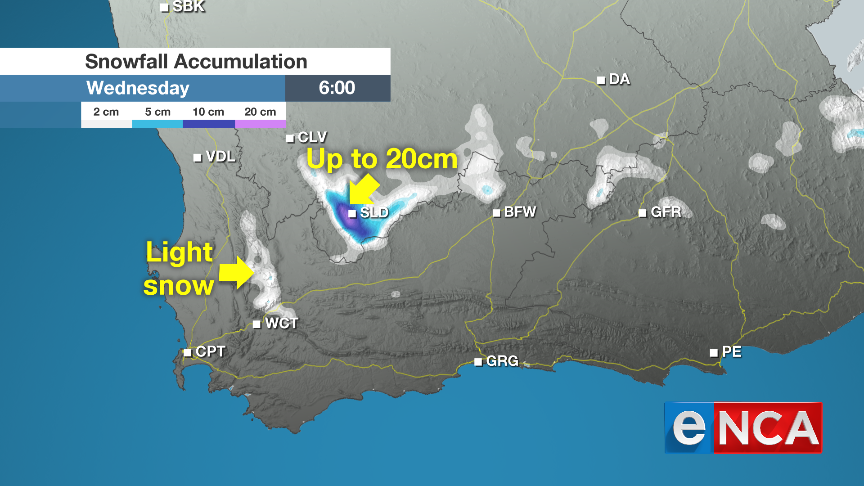 Light snowfall can be expected on the mountainous areas of the Western Cape from late afternoon on Tuesday until the early hours of Wednesday. Heavier snow of between 10cm and 20cm are likely in the southern parts of the Northern Cape especially around Sutherland.

The Cape Provinces will start experiencing strong winds of up to 50km/h on Monday ahead of the storm.

On Tuesday the winds will pick up speed. Wind speeds in excess of 55km/h are forecast over most areas in the Northern and Eastern Cape provinces as well as the eastern parts of the Western Cape.

The south west coast will be buffeted by strong to gale-force winds with speeds between 50 and 65km/h both on Monday and Tuesday.

The storm on Tuesday is also expected to bring thunder to places along the south west coast and adjacent interior and also over parts of the south coast around George.

Much of western and central South Africa will experience a big chill on Tuesday and Wednesday as the cold fronts sweep across the country.

Eastern South Africa including Gauteng should only cool down slightly on Wednesday. 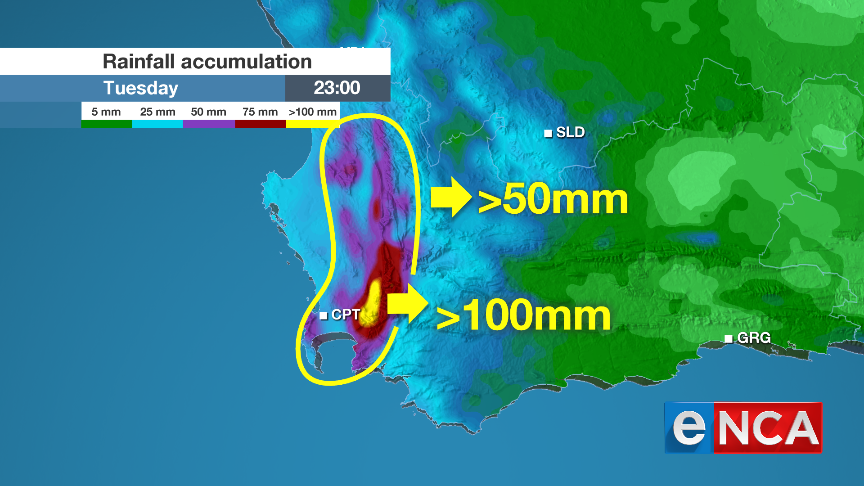 A 35 hour rainfall accumulation map indicates widespread heavy rainfall (50mm or more) over the western highground of the Western Cape, but more than 100mm of rain is predicted for the mountainous regions in the vicinity of Stellenbosch and Paarl.