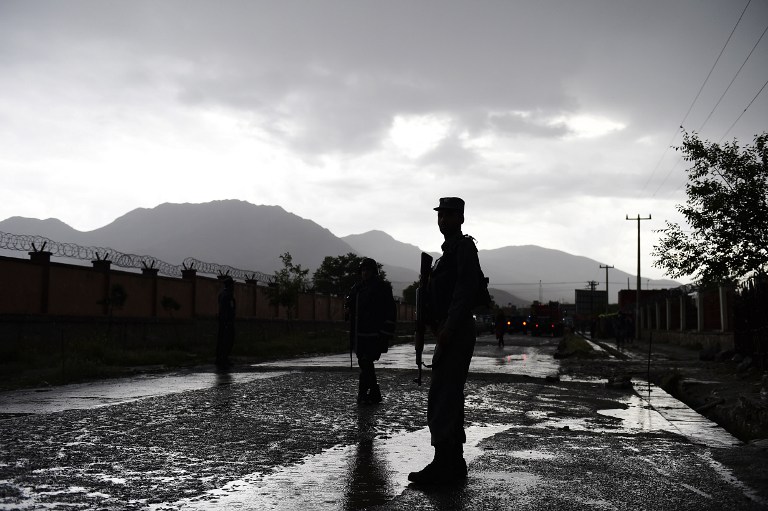 Afghan policeman keep watch at the scene of a suicide bomb attack in Kabul on May 10, 2015.

But President Ashraf Ghani denied any prisoners were exchanged to secure the release of the ethnic Hazaras who were seized in late February by masked gunmen from a bus in southern Zabul province.

Government efforts to secure the Hazaras&39; release have been shrouded in mystery as the Taliban, waging a 13-year insurgency in Afghanistan, distanced themselves from the incident.

The high-profile abductions had fuelled suspicions that militants aligned with the Islamic State group -- an emerging threat in Afghanistan -- were behind them.

"This is a happy and proud moment. Nineteen of our compatriots who had been taken hostage are today the guests of the government," Ghani told reporters.

He insisted that "no ransom was paid... and no prisoners were exchanged", but two provincial officials said some militants had been freed.

Asadullah Kakar, a member of Zabul&39;s provincial council, told AFP the Hazaras were freed "in exchange for 22 Uzbek militant fighters".

"These Uzbek militant fighters were detained when they entered Afghan soil from the bordering North Waziristan tribal area of Pakistan," he said, adding that the remaining abductees would be freed later Monday or Tuesday.

The allegiances of the freed militants were not immediately clear and another official said fewer fighters were released.

Hasan Reza Yousufi, a provincial council member in the restive southeastern province of Ghazni, claimed "10 to 16 Taliban detainees from Chechnya and Uzbekistan" were part of the swap.

Hazara Muslims, the third-largest ethnic group in Afghanistan, are often the target of sectarian violence at the hands of Sunni Muslim extremists in Pakistan, though such attacks have been relatively rare in Afghanistan.

The unusual abduction sent shockwaves through the community, evoking memories of the Taliban&39;s rule from 1996 to 2001, when minorities were heavily persecuted.

Family members of two of the 19 men told AFP they received calls from the government in Ghazni confirming their release.

Afghan officials have been tight-lipped about their behind-the-scenes efforts to secure their release but Ghani last month said his government had spent $6 million on the military operations to free them.

He did not offer any more details on the nature of those operations.

No one has yet claimed responsibility for the abduction in February, but kidnappings for ransom by bandits, local militias and Taliban insurgents are common in Afghanistan.

The kidnappings triggered speculation that the men had been seized by Afghan insurgents who have pledged allegiance to IS.

Those ethnic Hazaras were kidnapped after they travelled out of their home district to shop for cattle.

Nearly 200 Hazara Shiites were killed in early 2013 in two major attacks in the Pakistani city of Quetta, capital of Baluchistan province which borders southern Afghanistan.