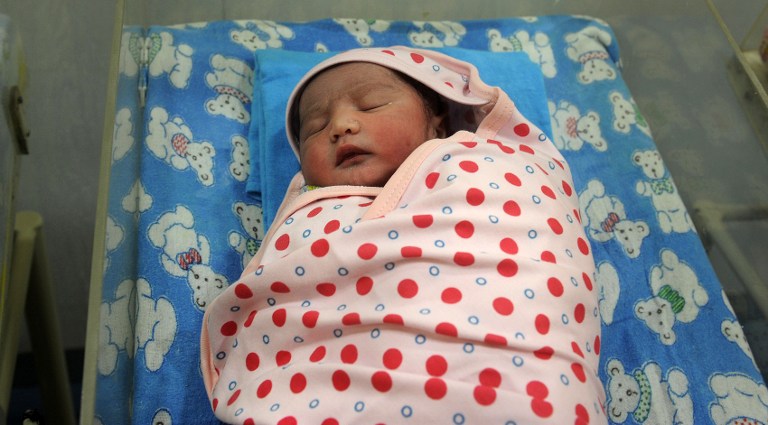 File: A newborn Indian baby lies inside a private hospital in Kolkata. Over 300,000 babies die within 24 hours of being born in India each year from infections and other preventable causes, according to a report.

NEW DELHI - More than 300,000 babies die within 24 hours of being born in India each year -- either from infections and other preventable causes, a report said Tuesday, blaming a lack of political will and funding for the crisis.

India accounts for 29 percent of all newborn deaths worldwide, according to the charity Save the Children which published the findings at the launch of its annual State of the World&39;s Mothers report.

Bangladesh and Pakistan also have large numbers of yearly first-day deaths at 28,000 and 60,000 with chronic malnourishment of mothers one of the major factors for the fatalities in the region

"Progress has been made, but more than 1,000 babies die every day on their first day of life from preventable causes throughout India, Pakistan and Bangladesh," said Mike Novell, the regional director of the charity.

The charity identified three major causes of newborn deaths --complications during birth, prematurity and infections -- and said access to low-cost, life-saving interventions could cut down the figures by as much as 75 percent.

"What is lacking is the political will and funding to deliver these solutions to all the mothers and babies who need them," it said.

A decade of rapid economic growth has allowed India to boost spending on poor and rural communities but Save the Children said most such programmes had not benefited those most in need.

More than half of all Indian women give birth without the help of skilled health care professionals, leading to infections and complications.

In far-flung areas, doctors and hospitals are rare and villagers often put the health of their children in the hands of poorly-trained substitutes.

But even in cities such as New Delhi with relatively better healthcare facilities women are delivering at home, said Sharmila Lal, a Delhi-based gynaecologist.

"Even if hospitals are near at hand, the women are having babies at home in a highly unsafe and unhygienic environment just because of lack of awareness," Lal added.

Lal said India must invest in creating a pool of paramedical staff trained in childbirth to take the load off doctors "who often don&39;t have time or patience to explain simple life-saving measures to expectant mothers".

The charity said the problem of infant mortality could be addressed by closing the equity gap in a developing country like India where economic benefits have been shared unequally.

"If all newborns in India experienced the same survival rates as newborns from the richest Indian families, nearly 360,000 more babies would survive each year," the report said.