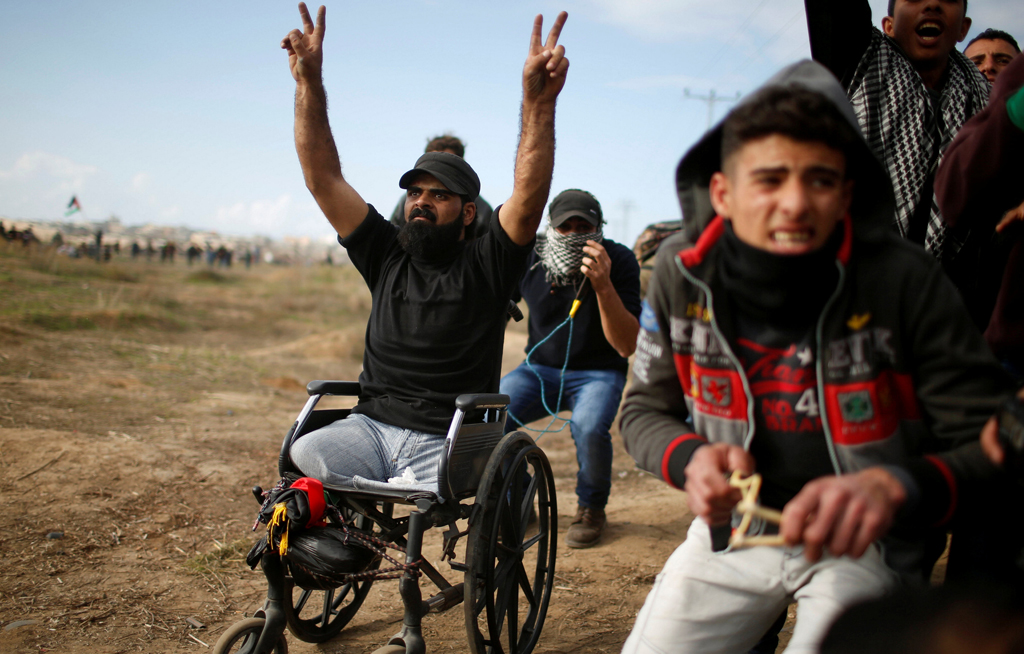 Wheelchair-bound Palestinian demonstrator Ibraheem Abu Thuraya, who according to medics was killed later on Friday during clashes with Israeli troops, gestures during a protest, near the border with Israel in the east of Gaza City.

GAZA - Four Palestinians were killed and hundreds wounded Friday in clashes with Israeli forces as tens of thousands demonstrated against Washington&39;s recognition of Jerusalem as Israel&39;s capital.

President Donald Trump&39;s December 6 announcement that he would break with decades of US policy and move the embassy to Jerusalem has stirred global condemnation, as well as demonstrations across Arab and Muslim countries.

On Friday three men were killed in clashes between Israeli troops and stone-throwing Palestinians.

Two died along the border of Israel and the Gaza Strip, the Palestinian health ministry said, after the Hamas Islamist group that rules the enclave had called for another "day of rage".

A third Palestinian was killed in clashes north of Jerusalem after being shot dead in the chest by the Israeli army, the ministry said.

The fourth stabbed an Israeli border police officer near a checkpoint on the outskirts of the occupied West Bank city of Ramallah, before being shot, police said.

The assailant, who later died of his wounds, wore what appeared to be a suicide vest, though it was unclear if it was operational.

The violence comes days before US Vice President Mike Pence is due to visit Israel, though he will no longer see Palestinian officials after they cancelled meetings in protest at the embassy move.

"We understand that the Palestinians may need a bit of a cooling off period, that&39;s fine," a senior White House official said Friday. "We will be ready when the Palestinians are ready to re-engage."

Pence is expected to try to push the Israeli-Palestinian peace process forward after he lands in Jerusalem on Wednesday, US administration officials have said.

"Obviously the last couple of weeks in the region have been a reaction to the Jerusalem decision," said a second senior administration official.

Protests erupted across the West Bank after Friday weekly prayers, often a catalyst for clashes between young Palestinians and Israeli soldiers.

In Gaza, tens of thousands of protesters took to the streets and a few thousand clashed with Israeli forces along different parts of the border.

The Palestinian health ministry said 164 people were injured in Gaza, with five in serious condition, and more than 100 were hospitalised in the West Bank.

Friday&39;s deaths brought to eight the number of Palestinians killed in violence or air strikes since Trump&39;s Jerusalem move.

In Jordan, thousands of people also demonstrated on Friday in the latest round of protests called by the Muslim Brotherhood, burning Israeli and American flags.

He called Israel a "terror state" and said: "Trying to make Jerusalem capital of a terror state is not a situation that can be accepted by Muslims."

The status of Jerusalem is one of the most controversial issues in the Israeli-Palestinian conflict.

Israel seized control of the eastern part of the city in the 1967 Middle East war and sees the whole of Jerusalem as its undivided capital. The Palestinians view the east as the capital of their future state.

For decades global powers have avoided taking an opinion, keeping their embassies in Tel Aviv instead.

Trump declared, however, that he would move the embassy and has recognised the city as Israel&39;s capital.

Palestinian president Mahmud Abbas will not meet Pence next week and has warned that Washington no longer had a role to play in the peace process.

A poll conducted after Trump&39;s announcement by the respected Palestinian Center for Policy and Survey Research found 45 percent of Palestinians supported a violent popular uprising, up from 35 percent three months previously.

Khalil Shikaki, the centre&39;s director, said the "only possible explanation" for the increase was Trump&39;s decision.

He said, however, the effectiveness of the Israeli forces and the Palestinian security forces&39; ongoing cooperation with them had ensured the protests in the West Bank remained relatively minor.

While angered by Trump&39;s declaration, Abbas has not instructed his party Fatah or security forces to cut ties with Israel.

"Hamas is too weak in the West Bank to carry out any serious attacks (and) Fatah does not want to engage in violence," Shikaki said.

"This is not likely to change any time soon."

In Gaza, hermetically sealed off by Israel and Egypt, at least 12 rockets or mortar rounds have been fired from the territory since Trump&39;s announcement, with Israel hitting at least 10 sites in response.