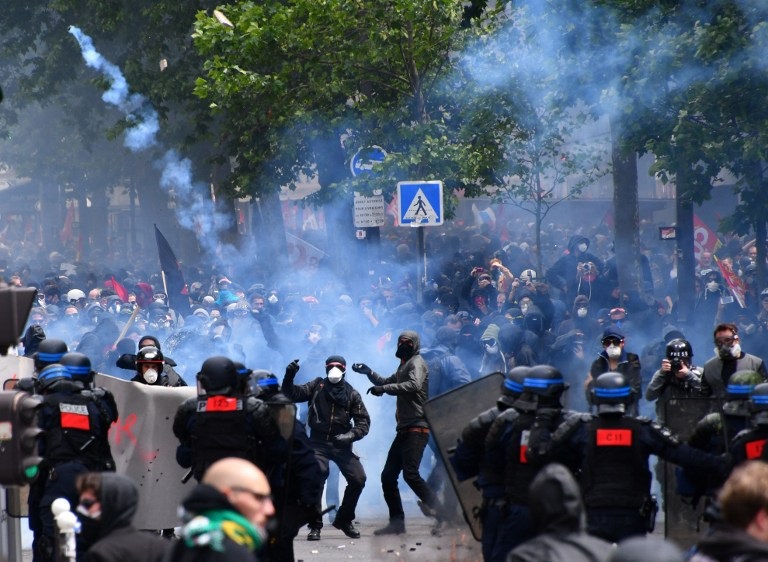 Protesters clash with riot police during a national demonstration and strike against the labour law reform in Paris, France, on 14 June 2016

PARIS - Forty people were hurt and authorities made 73 arrests on Tuesday as violence between riot police and masked troublemakers gripped Paris protests over France&39;s labour reforms.

Police fired water cannon in the south of the city to quell rioters as "several hundred" masked protesters lobbed objects at security forces in bloody scenes in the French capital.

Police said 29 members of the security forces were among the 40 injured overall.

The clashes erupted as the international spotlight was on France as the host of the Euro 2016 football championships, which have also been marred by violence between fans.

Strikes closed the Eiffel Tower and disrupted transport links as tens of thousands of fans continued to pour into the country for Europe&39;s showcase football event.

Protesters shouting "Paris, rise up" and "Everyone hates the police" also smashed shop windows and targeted banks in running battles through Paris with police.

An AFP photographer saw one man being led away by officers in riot gear with blood dripping from a wound above his eye onto his white T-shirt.

The strike is the latest in months of industrial action that has caused severe disruptions to air and rail transport, exhausted fuel supplies and led to mountains of rubbish on the streets of Paris.

"I&39;ve been to all the demos since March because I want to live in dignity, not just survive," said Aurelien Boukelmoune, a 26-year-old technician marching in Paris.

"I want the reforms to be withdrawn, pure and simple. Only then will it stop. For the government&39;s sake, they should withdraw the law, otherwise we&39;ll block the economy."

With France on high alert over fears of attacks during Euro 2016, overstretched security forces had feared the demonstrations could turn violent and banned 130 known troublemakers from taking part.

The terrorism threat was thrust back into the spotlight after a man claiming allegiance to the Islamic State group stabbed to death a police couple at their home in a northwestern Paris suburb late Monday.

The latest in a wave of protests that began in March coincides with a French Senate debate on the reforms, which are aimed at making the job market more flexible and reducing high unemployment but which critics see as too pro-business.

President Francois Hollande&39;s Socialist government has voiced hope the latest day of protest would be a last stand for the movement.

The CGT laid on more than 600 buses to transport demonstrators to Paris and unions said around one million people had joined in.

Police and unions gave wildly different figures for the turnout, with police estimating the crowds in Paris at between 75,000 and 80,000, and at least 125,000 overall in France.

Two further protest days are set for later this month.