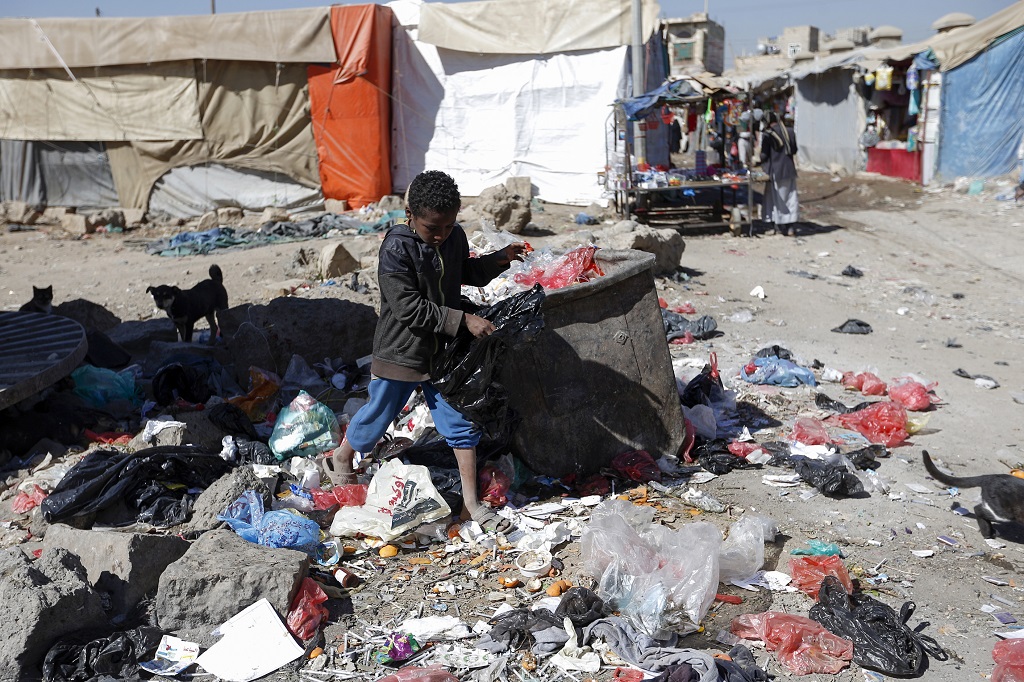 A waste picker boy collects reusable materials on the outskirts of the Yemeni capital Sanaa, on January 25, 2018.

GENEVA - The UN said on Friday that surging violence across Yemen had pushed some 85,000 people from their homes in the past 10 weeks, with hundreds continuing to flee each day.

The UN refugee agency said more than 70-percent of those displaced since December 1 had fled a military escalation in the Hodeida and Taez governorates on Yemen&39;s west coast.

UNHCR voiced particular concern for displaced people remaining in areas close to the hostilities in the two governorates, where conditions are continuing to rapidly deteriorate, "exposing people to violence and disease, without basic services."

"Most of those displaced in the governorates of Hodeida and Taez remain hosted by relatives or friends, trapped inside homes or in caves as ground clashes, aerial bombardment and sniper fire rage around them," UNHCR spokeswoman Cecile Pouilly told reporters in Geneva.

The UN agency also said it was observing a spike in new displacements from other frontline areas across Yemen, including in the border governorates of Jawf and Hajjah, and in the oil-rich eastern province of Shabwa.

"The main needs of the displaced and other conflict-affected populations continue to be access to shelter, health, food and water and sanitation," Pouilly said.

She warned that Yemen, which is already the stage of the world&39;s largest humanitarian crisis, with more than 22 million people in need of aid, was "seeing a spike in needs, fuelled by ongoing conflict, a collapsing economy and diminishing social services and livelihoods".

The UN last month made a record appeal for nearly $3-billion (R36.3-billion) to combat imminent famine as well as cholera and diphtheria outbreaks in Yemen this year.

UNHCR has asked for $200 million (R2.4-billion) of that amount for its work in the country, but Pouilly lamented that so far only three percent of that amount has materialised.

More than 9,200 people have been killed since the Saudi-led alliance joined the Yemen war in 2015, according to the World Health Organization, triggering what the United Nations has called the world&39;s worst humanitarian disaster.

Another nearly 2,200 Yemenis have died of cholera amid deteriorating hygiene and sanitation conditions, the World Health Organisation says.