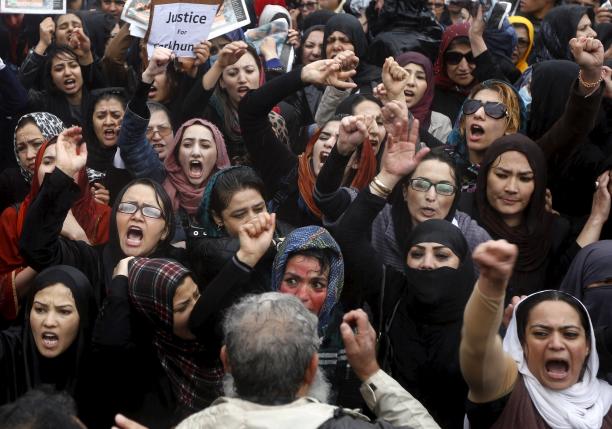 Members of civil society organisations chant slogans during a protest to condemn the killing of 27-year-old woman, Farkhunda, who was beaten with sticks and set on fire by a crowd of men in central Kabul in broad daylight on Thursday, in Kabul.

KABUL - Powerful religious leaders in Afghanistan are growing uneasy about the challenge to their authority posed by rare civil rights protests in Kabul and widespread anger over the lynching of a young woman wrongly accused of burning a Koran.

The highest religious authority, the Ulema Council, exerts considerable influence in a country that remains deeply conservative despite significant changes since the hardline Islamist Taliban fell in 2001.

But a series of demonstrations in the capital Kabul promoting women&39;s rights has prompted the clerics to threaten to withdraw support for President Ashraf Ghani in a challenge to his new government.

Some Ulema members say that Ghani, who took office in September, has failed to consult with them and seek their advice to the same extent that his predecessor, Hamid Karzai, did.

Numbering some 3,000 clerics and scholars, and headed by a 150-strong National Council, the Ulema can sway public opinion significantly through mosques across the country that are still the main source of Afghan social cohesion.

In recent months, a women&39;s rights activist walked around Kabul in a body suit with large breasts and buttocks. In another demonstration, a group of men assembled in public wearing all-covering blue burqas worn by most women in Afghanistan.

"We ask the government to tell them (civil rights groups) to stop. Otherwise, we know how to stop them," Ulema Council member Enayatullah Baligh, an adviser to the president and university lecturer, told Reuters at his office.

"I have 7,000 supporters who will obey any orders I give them. I can turn Kabul city upside down."

Baligh blamed the government, which has been hobbled by internal power struggles, for failing to enforce laws that would require it to punish those who offended Islam.

While small, the protests have been unusually provocative for Afghanistan, where few openly challenge what women&39;s rights activists say are customs and laws that discriminate against them and perpetuate abuses common under the Taliban.

Further alarming the Ulema has been a much broader public outcry over the brutal killing of a woman in central Kabul in March.

Farkhunda, a 27-year-old Islamic student, was wrongly accused of burning a Koran, Islam&39;s holy book. She was beaten to death by an angry mob before her body was set on fire and thrown on to the banks of the city&39;s main river.

During ensuing demonstrations, some people in the crowd shouted "Death to Mullahs" and "Death to the Koran", language most often used to denounce the United States.

Religious council leader Abdul Basir Haqqani recently told a gathering that the Ulema had been more insulted during Ghani&39;s seven months in power than at any time in Afghanistan&39;s history.

"These episodes have angered the mullahs (clerics) and I can see they are now drawing a line between this government and the former," said Borhan Osman, a researcher at the Afghanistan Analysts Network.

"They see the current government as evil, a foreign conspiracy that is allowing a struggle against Islam."

Ghani&39;s office sought to occupy the middle ground between religious conservatives and activists, saying it had zero tolerance for religious offences but there had been no evidence Islam was insulted during protests linked to the killing.

But the Ulema believes it may not have such a close relationship with Ghani as it did with Karzai, who backed some of its ultra-conservative demands in return for support.

Karzai did introduce the Elimination of Violence Against Women Law in 2009, and oversaw the return of millions of girls to schools after they had been banned under the Taliban.

Yet he was criticised in 2012 for endorsing an edict that called men "fundamental" and women "secondary", and saying they should avoid mingling with strange men in education, bazaars and offices.

On Wednesday, an Afghan judge sentenced four men to death for their part in Farkhunda&39;s death, including the caretaker of a Muslim shrine who falsely accused her of desecrating Islam&39;s holy book.

In all, 49 men, including 19 police officers, went on trial. Some of the police were accused of standing by and allowing the mob to kill her in broad daylight.

The lynching shocked many Afghans and was condemned by Ghani. But before investigators declared Farkhunda innocent of burning the Koran, some religious figures had defended her attackers&39; right to protect their faith at all costs.

Civil rights activists said they were determined to promote their cause despite the risk of reprisals.

"What will future generations do? Stay in the same, brutal society?" asked Leena Alam, who played Farkhunda in a recent public re-enactment of her murder designed to raise awareness of abuse against women. "We have to start somewhere."

Alam said she was hopeful Ghani would do more to protect women through tougher laws, although he had been distracted so far by squabbling within his fledgling government and with foreign trips seeking international support.

"Unfortunately I haven&39;t seen him do anything yet," she told Reuters. "We have not seen any leader do anything for women in Afghanistan over the past 13 years."