Afghan president blames US for deadly airstrike on civilians 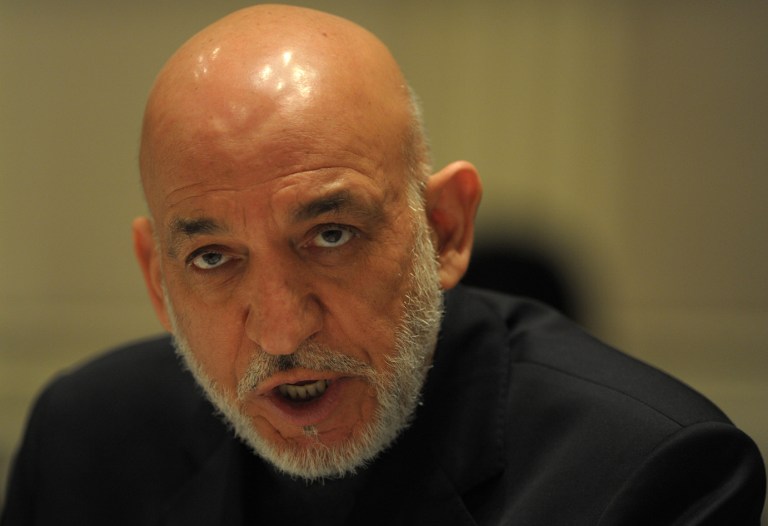 Afghan President Hamid Karzai on Friday condemned US troops for killing a four-year-old boy in the southern province of Helmand, in a fresh strain to troubled relations between Washington and Kabul.

KABUL - President Hamid Karzai on Wednesday accused the United States of killing seven children and a woman in an airstrike in central Afghanistan -- an incident set to further damage frayed ties between the two allies.

Relations between Washington and Kabul have been rocky for years, and negotiations over an agreement that would allow some US troops to remain in the country after this year have broken down into a long-running public dispute.

"As a result of bombardment by American forces last night... in Siahgird district of Parwan province, one woman and seven children were martyred and one civilian injured," a statement from Karzai&39;s office said.

"The Afghan government has been asking for a complete end to operations in Afghan villages for years, but American forces acting against all mutual agreements... have once again bombarded a residential area and killed civilians."

Civilian casualties have been one of the most sensitive issues of the 13-year military intervention in Afghanistan, and Karzai has often used accidental shootings and misguided airstrikes to berate foreign countries and stir public anger.

ISAF added that one of its soldiers was killed in the fighting, as well as at least 10 insurgents.

A Taliban spokesman said that 12 Afghan soldiers had been killed, but the insurgents often exaggerate death tolls.

Siahgird district, about 40 kilometres (25 miles) north of Kabul, is on the main road from the capital to Bamiyan.

The route was considered safe, but the region has become increasingly violent with major clashes between Afghan security forces and the Taliban erupting since October.

Late last year, Karzai made a surprise decision not to promptly sign the bilateral security agreement (BSA) with the United States, leading to the threat of a complete withdrawal of NATO troops by the end of 2014.

The BSA would see several thousand US troops remain in Afghanistan to provide training and assistance in the battle against the Taliban after the NATO combat mission ends in December.

Signing the agreement is also a precondition for the delivery of billions of dollars in Western aid for Afghanistan, which will hold an election to choose Karzai&39;s successor in April.

Afghanistan&39;s army and police have developed rapidly in the past four years, but the country risks slipping into turmoil without foreign assistance if Islamist militias and warlords vie for power.

Relations between the United States and Afghanistan also worsened when Kabul last week said it would release scores of alleged Taliban fighters from jail as there was no evidence against them.

US President Barack Obama on Monday insisted he had faith in his Afghan war strategy after former defense secretary Robert Gates claimed the president had soured on his 2009 decision to send in 30,000 extra troops.