'EL Chapo' caught: will he face US justice? 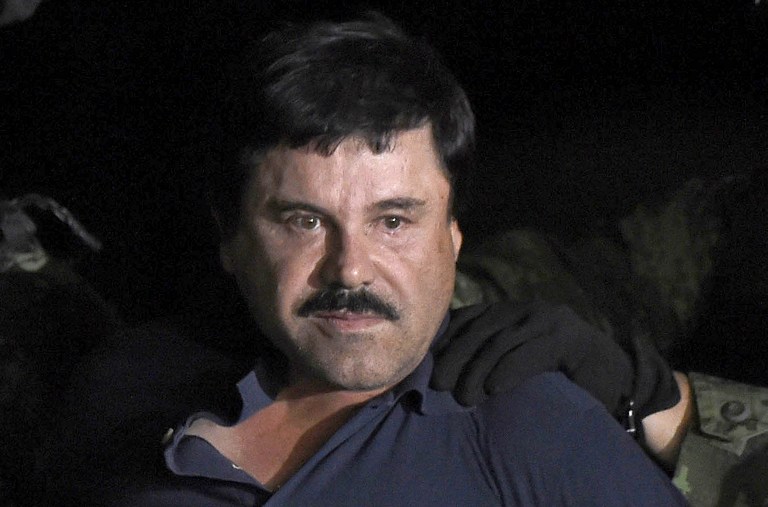 Drug kingpin Joaquin "El Chapo" Guzman is escorted into a helicopter at Mexico City's airport on January 8, 2016 following his recapture during an intense military operation in Los Mochis, in Sinaloa State.

MEXICO CITY - With Joaquin "El Chapo" Guzman back in prison, Mexico&39;s government will likely seek to quickly extradite the slippery drug baron to the United States rather than risk losing him again, analysts say.

President Enrique Pena Nieto had balked at any extradition before Guzman escaped from a top-security prison on July 11, promising to keep him behind bars and putting the Sinaloa drug cartel kingpin on trial in Mexico.

Guzman&39;s recapture by marines in the coastal city of Los Mochis, Sinaloa state, on Friday has helped Pena Nieto save face midway through his six-year term, but he won&39;t take the risk of losing him again.

The fear is justified, as Guzman escaped from two maximum-security prisons, fleeing in a laundry cart in 2001 and in a 1.5-kilometer (one-mile) tunnel in July.

And with few high-security facilities available, Guzman was sent back to the Altiplano penitentiary that he escaped from near Mexico City.

"The big question is not if they will extradite him, but when," Alejandro Hope, a security expert and former Mexican intelligence service official, told AFP.

"The day that Guzman enters a Mexican prison is the day that he will begin to plan his next escape," Hope said. "I don&39;t think that the Mexican government wants to run the risk of another escape."

Government officials avoided any talk of extradition following Friday&39;s arrest, though prosecutors sought an arrest warrant for his extradition in September.

But any extradition could take time as Guzman&39;s attorneys won an injunction in November, arguing that the 58-year-old kingpin risks the death penalty in the United States, a punishment that doesn&39;t exist in Mexico.

Guzman is wanted on drug trafficking charges in a half-dozen US states and the Mexican government said it formally received a US extradition request on June 25, two weeks before his escape.

His jailbreak highlighted the corruption problems facing Mexico&39;s penitentiary system, as a dozen prison and police officials were detained over the jailbreak.
US politicians quickly called on President Barack Obama to pursue Guzman&39;s extradition.

"Given that &39;El Chapo&39; has already escaped from Mexican prison twice, this third opportunity to bring him to justice cannot be squandered," said US senator and Republican presidential candidate Marco Rubio.

"The easiest thing would be to swiftly extradite &39;Chapo&39; Guzman and, once again, the Mexican state shows that it doesn&39;t have the strength to punish those who commit crimes in our territory," Barbosa said.

Raul Benitez Manaut, a security expert at the National Autonomous University of Mexico, said the authorities should "break with judicial nationalism" and extradite Guzman.

"The government has an obligation to change opinion and favor his extradition," Benitez said.

Pena Nieto&39;s government showed its willingness to ship out criminals in September when it extradited 13 top drug capos to the United States.

His popularity collapsed following the escape, along with his much-criticized handling of the presumed massacre of 43 students by a police-backed gang and a scandal over his wife&39;s purchase of a mansion from a government contractor.

"At least he can cross Chapo off the list," said Jose Antonio Crespo, political expert at the Center for Economic Research and Teaching.

"It&39;s convenient for Pena Nieto to extradite him, even though it&39;s an admission that he can&39;t hold him," Crespo said.

This would allow the president to "wash his hands of" Guzman, he said.