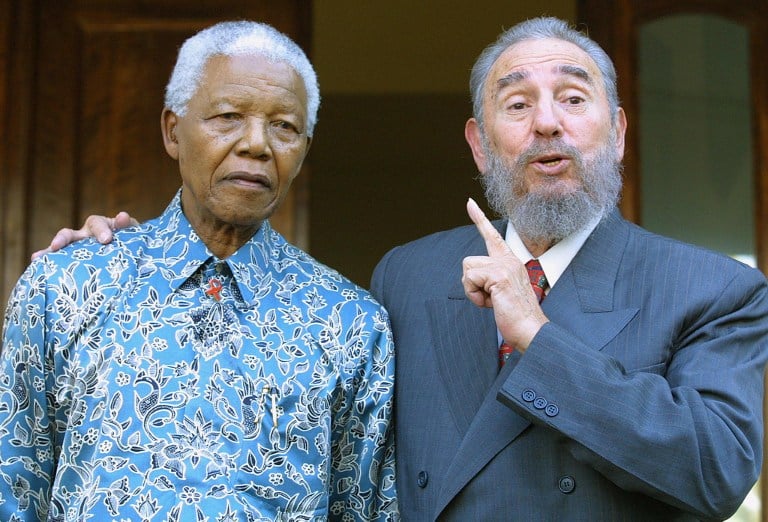 JOHANNESBURG - South Africa joined world leaders in hailing Fidel Castro's leadership following his death on Friday at the age of 90.

President Jacob Zuma - he 'identified with our struggle against apartheid'

"As a way of paying homage to the memory of President Castro, the strong bonds of solidarity, cooperation and friendship that exist between South Africa and Cuba must be maintained and nurtured."

The Nelson Mandela  Foundation sent its "deepest condolences to the people & government of Cuba on passing of Fidel Castro," it said in a tweet shortly after the former Cuban leaders passing.

EFF - 'a loss to the African continent'
The EFF issued a statement saying it mourned Castro's passing.

"We send our revolutionary condolences to the family and close friends as well as the people of Cuba as a whole. We know too well that Commandant Fidel Castro's 90 years of existence touched the lives of many in the world, particularly socialist militants who are still fighting capitalism and imperialism.

"The passing of Commandant Castro is a loss to us in the African continent as well for we benefited from his leadership and the revolution he led on behalf of his people...

After (Cuba) inaugurated a socialist order, they did not focus only on their well being, but continued, and in many instances, to their own detriment, to contribute to the freedoms of others in the world.

The EFF quoted Castro's May Day address in 2000 in Cuba, when he said,  "Revolution means to have a sense of history; it is changing everything that must be changed; it is full equality and freedom; it is being treated and treating others like human beings; it is achieving emancipation by ourselves and through our own efforts; it is challenging powerful dominant forces from within and without the social and national milieu; it is defending the values in which we believe at the cost of any sacrifice; it is modesty, selflessness, altruism, solidarity and heroism; it is fighting with courage, intelligence and realism; it is never lying or violating ethical principles; it is a profound conviction that there is no power in the world that can crush the power of truth and ideas.

"Revolution means unity; it is independence, it is fighting for our dreams of justice for Cuba and for the world, which is the foundation of our patriotism, our socialism and our internationalism."

The EFF also noted 'the medical contribution of the Cuban people to the oppressed of the world... The Cuban Medical Internationalism is known to contribute more medical personnel to the developing world than the G8 countries combined. Not only does Cuba send doctors to the world, it also brings thousands of foreign nationals to its universities for medical training."

The party said, "His passing... brings hope in the fact that a life of revolutionary conviction and commitment to human freedom is possible. In his honour, we say long live the Cuban Revolution - "Hasta la Victoria Siempre". May the spirit of Commandant Fidel Castro Ruz rest in perfect revolutionary peace."

SACP
The SACP issued a statement mourning the death of Castro, "an internationalist revolutionary par excellence."

The party  expressed its "profound revolutionary solidarity and condolences with the people of Cuba and Castro’s family" on his passing.

“Comrade Fidel Castro belonged to the rarest breed of finest revolutionaries who made an invaluable contribution in the struggle for the emancipation of humanity. Human history will be incomplete without Comrade Fidel Castro’s colossal contribution in the struggle for freedom, for  a society without the exploitation of one person, group, or country by another," the party said.

"The people and government of Cuba offered an outstanding solidarity support under the leadership of Comrade Fidel Castro in our own struggle against colonial oppression, apartheid, economic exploitation and African continental independence. The defeat of the forces of apartheid South Africa in Angola that paved the way to the dislodgment of the apartheid regime in South Africa in 1994 would not have happened without the people of Cuba and Comrade Fidel Castro’s exceptional leadership."

"Cuba’s contribution in the struggle for freedom by the democratic people of our country, Southern African region, the African continent and elsewhere came without any strings attached. This revolutionary culture continues to this day, the latest example being the excellent work done by Cuban healthcare professionals in the fight against the deadly Ebola virus in our continent.

"South Africa is also host to Cuban healthcare professionals working in rural areas where there are few or even no South African doctors looking after the health needs of our people.   South Africa also has about 3,000 students training as doctors in Cuba.

"We dip our red revolutionary banner in memory of Comrade Fidel!"

"The name of this distinguished statesman is rightly considered the symbol of an era in modern world history," Putin said in a telegram to Cuban President Raul Castro cited by the Kremlin. "Fidel Castro was a sincere and reliable friend of Russia."

"An actor of the Cold War... he represented, for Cubans, pride in rejecting external domination," Hollande added, alluding to Castro's defiance of the United States.

Mikhail Gorbachev - he left a 'deep mark in the history of mankind'
Former Soviet leader Mikhail Gorbachev on Saturday hailed Fidel Castro, the Cuban socialist icon who has died aged 90, for "strengthening" his island nation.

"Fidel stood up and strengthened his country during the harshest American blockade, when there was colossal pressure on him and he still took his country out of this blockade to a path of independent development," Interfax news agency quoted Gorbachev as saying.

"In the past years, even when Fidel Castro was not formally in power, his role in strengthening the country was huge."

Gorbachev added that Castro would be remembered as a "prominent politician" who managed to leave a "deep mark in the history of mankind."

The leaders of Mexico and El Salvador hailed Castro in messages on Twitter in the hours after the announcement.

"Fidel Castro will be remembered as a giant among global leaders." https://t.co/hX84AajZ5l pic.twitter.com/AXciQ6Qcns

Cuban President Raul Castro, who took power after his elder brother Fidel was hospitalised in 2006, said that the revolutionary leader's remains will be cremated early on Saturday.