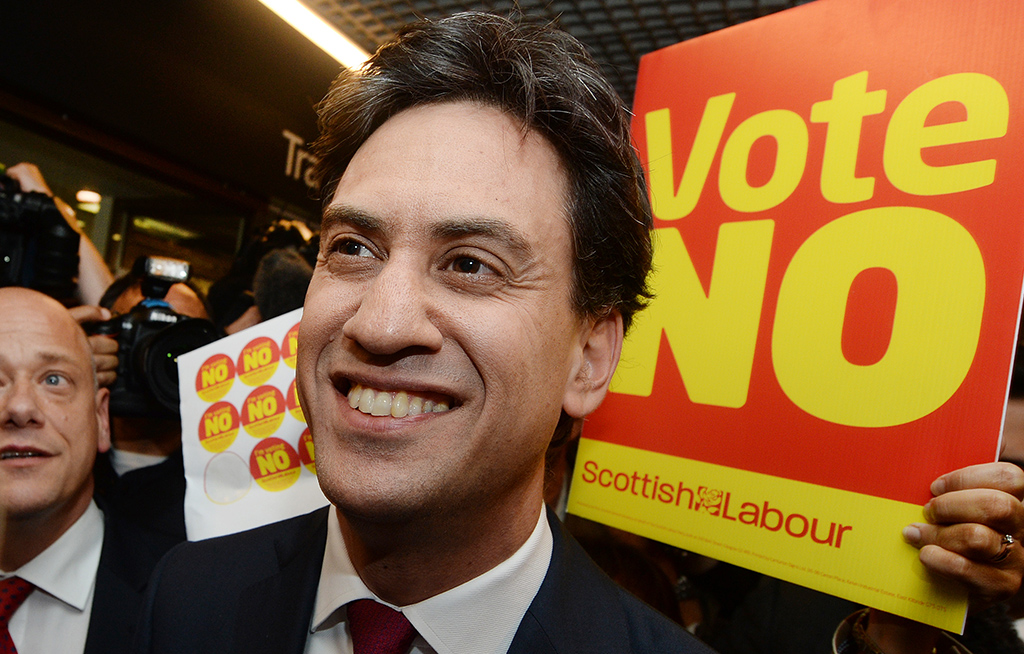 Scotland - Labour Party leader Ed Miliband campaigning ahead of the Scottish referendum vote on 18 September. The leaders of Britain's three main parties have pledged to hand over more powers to Scotland if voters reject independence.

GLASGOW, Scotland - Shirleen Barrowman is one of a growing band of Scots who support the United Kingdom, and yet plan to vote in next week&39;s general election for the party dedicated to breaking up Britain.

Such is their anger with the London-based political elite, and the Labour Party in particular, that they will back the Scottish National Party (SNP) on May 7, even though they rejected independence in last year&39;s referendum.

This apparent conflict of loyalties offers the secessionist SNP an opportunity to reach the heart of British power, and may frustrate Labour leader Ed Miliband&39;s hopes of defeating conservative Prime Minister David Cameron.

Barrowman, a 42-year-old personal assistant, is typical of the disillusioned Scots who are turning their backs on Labour, the party that dominated Scottish politics for decades.

"I believe the union should stay together," Barrowman told Reuters in Glasgow, Scotland&39;s biggest city.

"I voted Labour all my life and I&39;m now at the point where I&39;m thinking Labour hasn&39;t actually done anything for me at all," she said. "At the forefront of my mind, it&39;s what party can help me at the moment? I think that&39;s the SNP."

Voting figures show how the SNP has persuaded some Scots who rejected independence on Sept. 18 that it is the party that can best defend Scottish interests in the Westminster parliament.

While 44.7 percent voted for independence in the referendum, a YouGov poll has shown SNP support now at 49 percent while another from TNS put it at 54 percent. The centre-left Labour languished on 25 and 22 percent respectively in the polls.

"There are a group of people who voted &39;No&39; last year who will vote SNP this time and they will predominantly be ex-Labour voters," said Mark Diffley, director of Ipsos MORI Scotland. This group might have come close to voting "Yes" to independence but ultimately decided to preserve the union, he said.

In the last Westminster elections in 2010, the SNP won just six seats to Labour&39;s 41. But a forecast based on the TNS poll indicates it could take as many as 57 of Scotland&39;s 59 seats in the British parliament, with Labour left with just one.

That would mark the worst Labour result in Scotland since the party&39;s creation in 1900. One projection based on an Ipsos MORI poll even showed the SNP taking a clean sweep of all 59.

With neither Cameron&39;s Conservatives nor Labour expected to achieve a majority, such a performance could make the SNP a kingmaker as probably the third biggest party in Westminster.

SNP leader Nicola Sturgeon has ruled out any deal with the Conservatives, who had only one Scottish seat in the outgoing parliament, but raised the possibility of an arrangement with Labour. Miliband appears to have rejected this idea, but Sturgeon has said he will change his tune if she has the power to hand him the keys to the world&39;s fifth largest economy.

Sturgeon says she still wants independence but has given conflicting signals about whether she will include a call for another referendum in the SNP manifesto for elections to the Scottish parliament in 2016.

Some pro-union Scots say that last year&39;s "no" vote has allowed them to regard backing the SNP as more than simply a vote for breaking the 308-year-old union.

They look to the SNP&39;s demands for less austerity and more public spending, its stand on the National Health Service (NHS) and its opposition to renewing Britain&39;s Trident nuclear missiles, which are carried by submarines based in a loch 65 km (40 miles) outside Glasgow.

That&39;s a policy which David, a 50-year-old engineer and former Labour voter who opposed independence, says has helped to persuade him to vote next week for the nationalists, who have run the Scottish government since 2007.

"They come across as very competent in the Scottish government. Much more professional than Labour," he said declining to give his surname.

Nevertheless, his support is conditional. "I&39;m not a nationalist and I voted against independence," he said. "If they put it in again, I won&39;t vote for them."

Scottish Labour leader Jim Murphy has been tasked with turning his party&39;s fortunes around. But polling data collected by Lord Ashcroft, a Conservative member of the upper house of parliament, shows the SNP&39;s lead over Labour in his East Renfrewshire constituency has grown from one percentage point in February to 9 points by this month.

In Clarkston, 10 miles south of Glasgow&39;s city centre, Kirsten Oswald is the SNP candidate hoping to defeat Murphy in the constituency. At one end of the town&39;s main road, a make-shift SNP campaign office in a former shop has the feel of a living room with home-made cupcakes and a vase of flowers. At the other end stands a huge SNP billboard featuring Sturgeon.

Swept up by the excitement of the independence referendum, Oswald joined the SNP only last June. She told Reuters that while the SNP believes in independence, that&39;s not the question for next week&39;s vote. "This general election is about the issues to do with austerity, the issues to do with Trident, the NHS, and all kinds of things that are very real for folk."