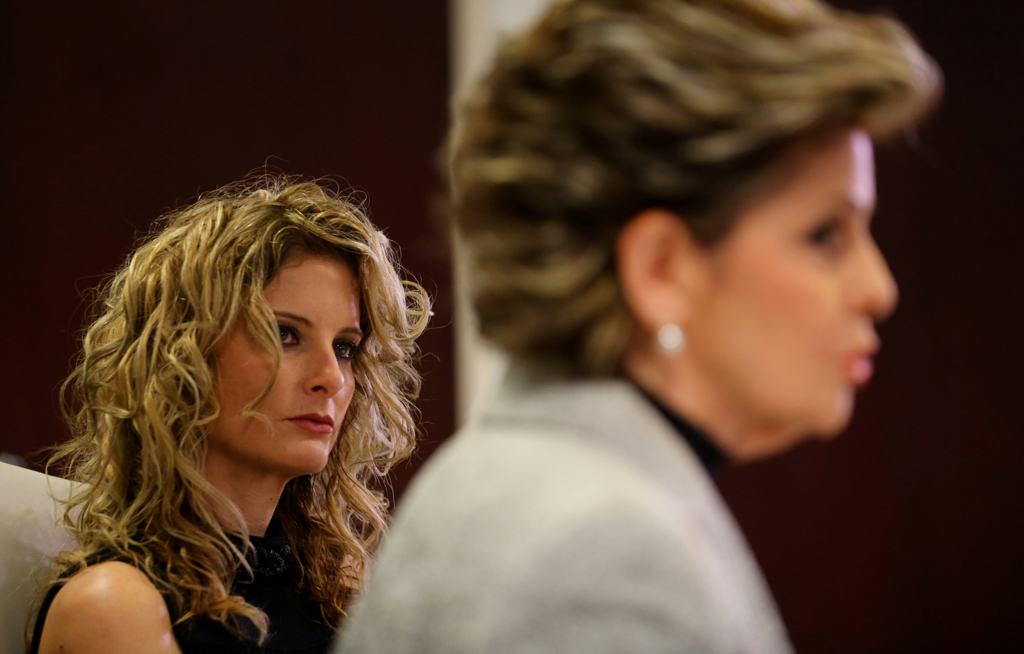 Summer Zervos listens as her attorney Gloria Allred speaks during a news conference announcing the filing of a lawsuit against President-elect Donald Trump in Los Angeles, California, US, January 17, 2017.

LOS ANGELES - President-elect Donald Trump was hit with a defamation lawsuit on Tuesday by a former contestant on his reality television show "The Apprentice," who had previously accused him of sexual misconduct.

Summer Zervos's lawsuit claims that Trump -- set to become the 45th US president on Friday -- lied when responding to allegations that he tried to kiss and grope her without her consent.

Trump is a "liar and misogynist" who has "debased and denigrated Zervos with false statements about her," the lawsuit says.

The Republican president-elect, who faced a spate of sexual misconduct accusations in the weeks leading up to the election, has previously denied any wrongdoing and vowed to sue the more than a dozen women behind the claims.

"All of these liars will be sued after the election is over," Trump said at a rally in Pennsylvania in October. He has yet to file suit.

Zervos's attorney Gloria Allred said her client -- who previously said she would not take any legal action against the president-elect if he did not sue and if he retracted his comments -- had a change of heart as Trump has shown no remorse for his alleged behaviour and had "lied" further to cover it up.

The longtime women's rights attorney said her 42-year-old client had passed a lie detector test concerning her allegations before filing the suit.

No one above the law

"It takes a great deal of courage to sue the most powerful man on the planet," Allred told reporters at a news conference in Los Angeles, adding that Zervos was well aware of the risks she was taking by going after Trump.

"No one is above the law, including the president-elect," she said.

In a statement read to reporters, Zervos said she would be willing to drop the case if Trump agreed to retract his comments about her and if he acknowledged she had told the truth about their encounter.

Zervos last year revealed that Trump had made unwanted sexual advances toward her when she met him at the Beverly Hills Hotel in Los Angeles in 2007 to discuss career opportunities.

Trump moved toward her aggressively during the encounter and touched her on the breast but she rebuffed him, she alleged.

Zervos and several other women who made similar allegations came forward after a 2005 videotape of Trump bragging about groping women surfaced in early October.

The president-elect claimed his comments on the tape were "locker-room banter," and denounced the sex assault allegations as lies and fabricated stories.

Should Zervos's case go to trial, it could open a can of worms for Trump as it may lead to the release of long-sought outtakes from his 14 seasons on "The Apprentice."

"We would certainly seek any and all information and documents, recordings etc, which may be relevant to the litigation of our lawsuit," Allred said.

The former reality TV show contestant is asking for unspecified compensatory and punitive damages should her suit go to trial.

There was no immediate reaction on Tuesday from Trump -- who often takes to Twitter to publicise his opinion on specific issues -- or his transition team concerning the suit.