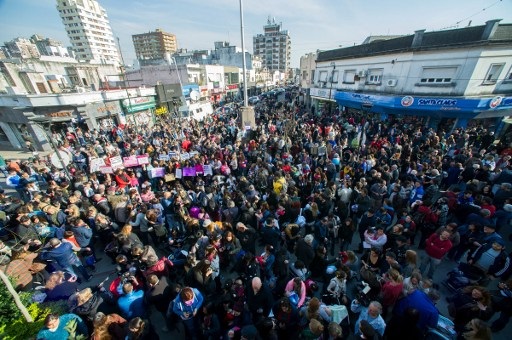 People gather as women breastfeed their children during a demonstration at a square in San Isidro, on the outskirts of Buenos Aires on 23 July 2016.

BUENOS AIRES - Hundreds of women turned out in Argentina to breastfeed in public on Saturday, in protest at the removal of a mother for nursing publicly in a Buenos Aires square last week.

Waving signs that read "No repression; nursing is not up for discussion" and "My breasts, my rights; I&39;m not interested in your opinion", some 500 women demonstrated in support of Constanza Santos, who police took from the square for nursing her nine-month-old.

Instead of a sit-in, some called the protest a breastfeed-in.

Supporters said the case was disturbing and that they were not going to let mothers&39; rights be trampled on.

Similar demonstrations were held in other cities, including Mar del Plata, Tucuman and Neuquen.

"This is great because it sheds light on a problem. And police need to be on the public&39;s side and not work against them," said Argentine human rights activist Adolfo Perez Esquivel, the 1980 Nobel peace laureate.