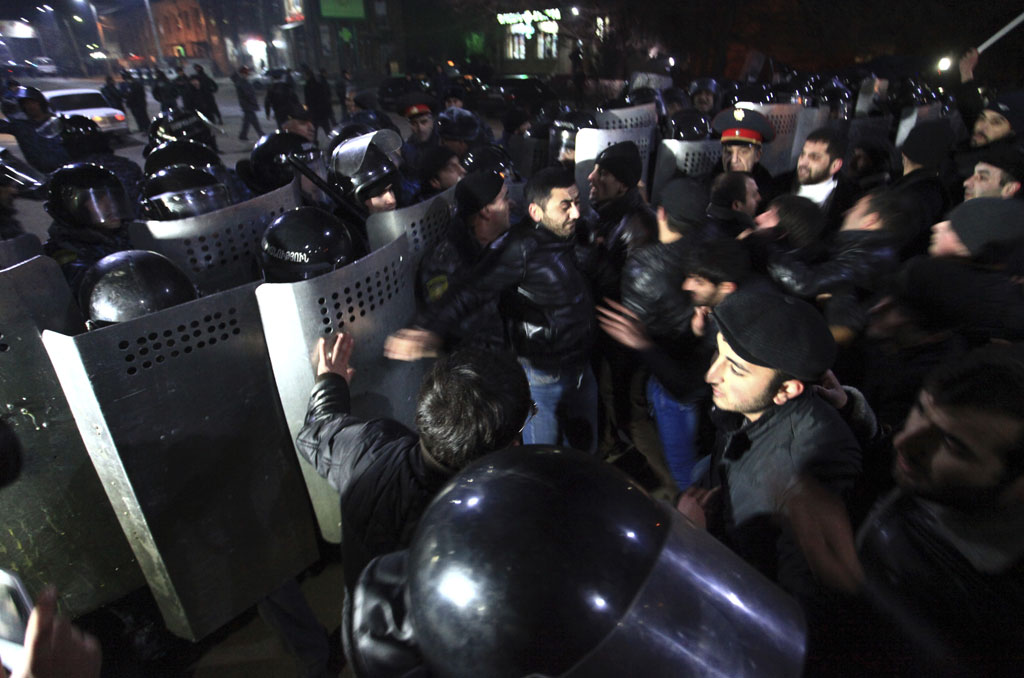 Armenian people clash with police during a mass protest outside the Russian Consulate General in the city of Gyumri, Armenia, 15 January 2015

YEREVAN – Protesters clashed on Wednesday with police in the Armenian capital Yerevan, furious over the government&39;s handling of a four-day hostage crisis in which pro-opposition gunmen seized a police building, killing one officer and taking several hostage.

Police hit back firing tear gas and stun grenades into the crowd.

"Many officers were wounded" in the clashes, deputy chief of Armenian police, Samvel Hovhannisyan, told AFP.

The protest continued into the early hours of Thursday as some 2,000 protesters built barricades in front of the cordons of baton-wielding riot police in flak jackets and helmets.

Protesters have called on the authorities to allow an opposition MP to deliver food to the gunmen who have refused to accept provisions from the government.

The gunmen, who captured a large arsenal of police weapons, freed four hostages on Sunday and Monday, but were still holding four hostages as of Wednesday night.

The attackers have demanded the resignation of President Serzh Sarkisian and the release of Sefilyan.

The US State Department has condemned "the use of violence to effect political change in Armenia" and urged the government to "handle the situation with appropriate restraint."

More than 1,500 anti-government protesters rallied in Yerevan on Monday, calling for a bloodless resolution to the crisis.

Sefilyan, the leader of small opposition group named the New Armenia Public Salvation Front, and six of his supporters were arrested in June after authorities said they were preparing to seize government buildings and telecoms facilities in Yerevan.

Last year, Sefilyan and several of his supporters were arrested again on suspicion of preparing a coup, but released shortly afterwards.

An ethnic-Armenian, he was born in Lebanon where he fought in the civil war in the 1980s, defending Beirut&39;s Armenian Quarters.

He then moved to Armenia to take part in the 1990s war with neighbouring Azerbaijan for control of the Armenian-populated separatist region of Nagorny Karabakh.

Sarkisian, a former military officer, has been president of the tiny country of 2.9 million people since winning a vote in 2008 that saw bloody clashes between police and supporters of the defeated opposition candidate in which 10 people died.