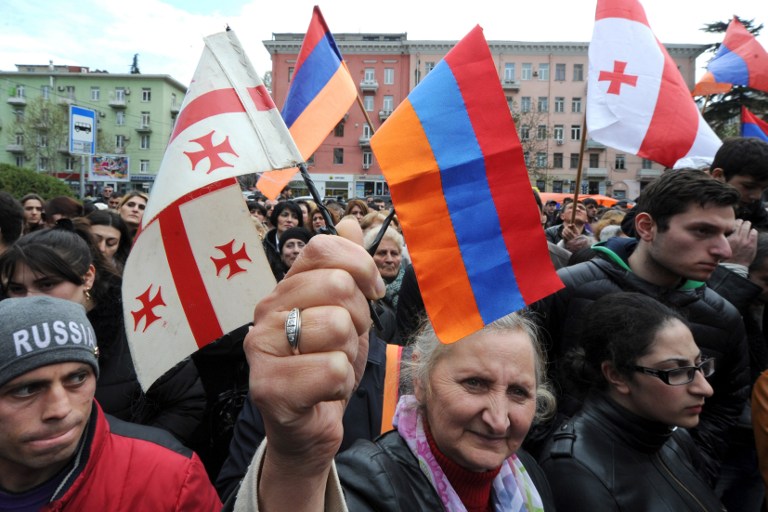 People holding Armenian and Georgian flags gather in central Tbilisi on April 24, 2015 to mark the 100th anniversary of the Armenian genocide.

ISTANBUL - Hundreds of Armenians staged memorials in Turkey on Friday to mourn their forebears killed 100 years ago and push the government in Ankara to recognise what they say was a genocide by Ottoman Turks.

In Istanbul and a few cities in Turkey&39;s southeast, where most of the Armenian population then lived, makeshift memorials and rallies sprang up, some organised with Turks, in scenes that would have been unthinkable in Turkey a decade ago.

A senior Turkish minister for the first time joined prayers at the Armenian Patriarchate, showing how Turkey, facing international pressure to recognise a genocide, has softened its opposition to Armenia&39;s argument that Ottoman Turks killed 1.5 million of their ancestors during World War One.

"We respect the pain our Armenian brothers experienced. We say this was a bad event, so we&39;re not opposed to bearing witness and remembering this pain," EU Affairs Minister Volkan Bozkir told reporters as church bells rang out.

Turkey has none the less strongly criticised foreign leaders and institutions, including the pope and European parliament, who have joined two dozen nations and the majority of Western scholars in describing the massacre as a genocide.

Dikram Basmaciyan loitered outside of the Holy Mother of God church, remembering his grandmother who lost all of her family in 1915. "Must we wait another 100 years for an apology?" he said, tears streaming down his face.

Armenia marked the centenary with a simple flower-laying ceremony in the capital Yerevan attended by foreign leaders, as Germany became the latest country to respond to its calls for recognition that the killings were a genocide.

Turkish Prime Minister Ahmet Davutoglu expressed his sadness over the loss of life, a shift in tone after decades of acrimony with Armenians.

But the more conciliatory tone is a result of pressure from abroad, said Yetvart Danzikiyan, editor of Agos newspaper that serves the remaining community of 60,000 Armenians in Istanbul.

"The government wants to appear to be making reforms ... (But) it still isn&39;t saying what it needs to: that a terrible thing was done to Armenians. They didn&39;t die in war, their deaths were the result of a massacre that was planned," he said.

"There was no genocide, it was protecting the homeland," the crowd chanted, waving the Turkish flag.

A 2014 study showed only 9 percent of Turks believe Armenians were killed in a genocide. Most say the deaths were the result of internecine conflict in the chaos of a global war.

But grassroots efforts are growing among some Turks to atone for what they say are the crimes of their Ottoman ancestors.

About 100 people held signs calling on the government to apologise outside a former Ottoman palace, now a museum of Islamic artefacts, in Istanbul&39;s historic Sultanahmet district.

Its cool, dark halls bear no signs of its former role as a prison, where, on the Saturday after Easter on April 24, 1915, some 250 Armenians were jailed before their deportation to the provinces for execution, the first wave of violence that culminated in the massacres.

Protesters held up red carnations and portraits of the men - intellectuals, political leaders and civil servants - arrested that day in Istanbul, once a centre of Armenian cultural life.

"They thought no one would remember the victims or the perpetrators, that it would be buried," said Serge Tomassian, 58, who travelled from California to honour his grandmother Heghnine, who survived deportation to the desert.