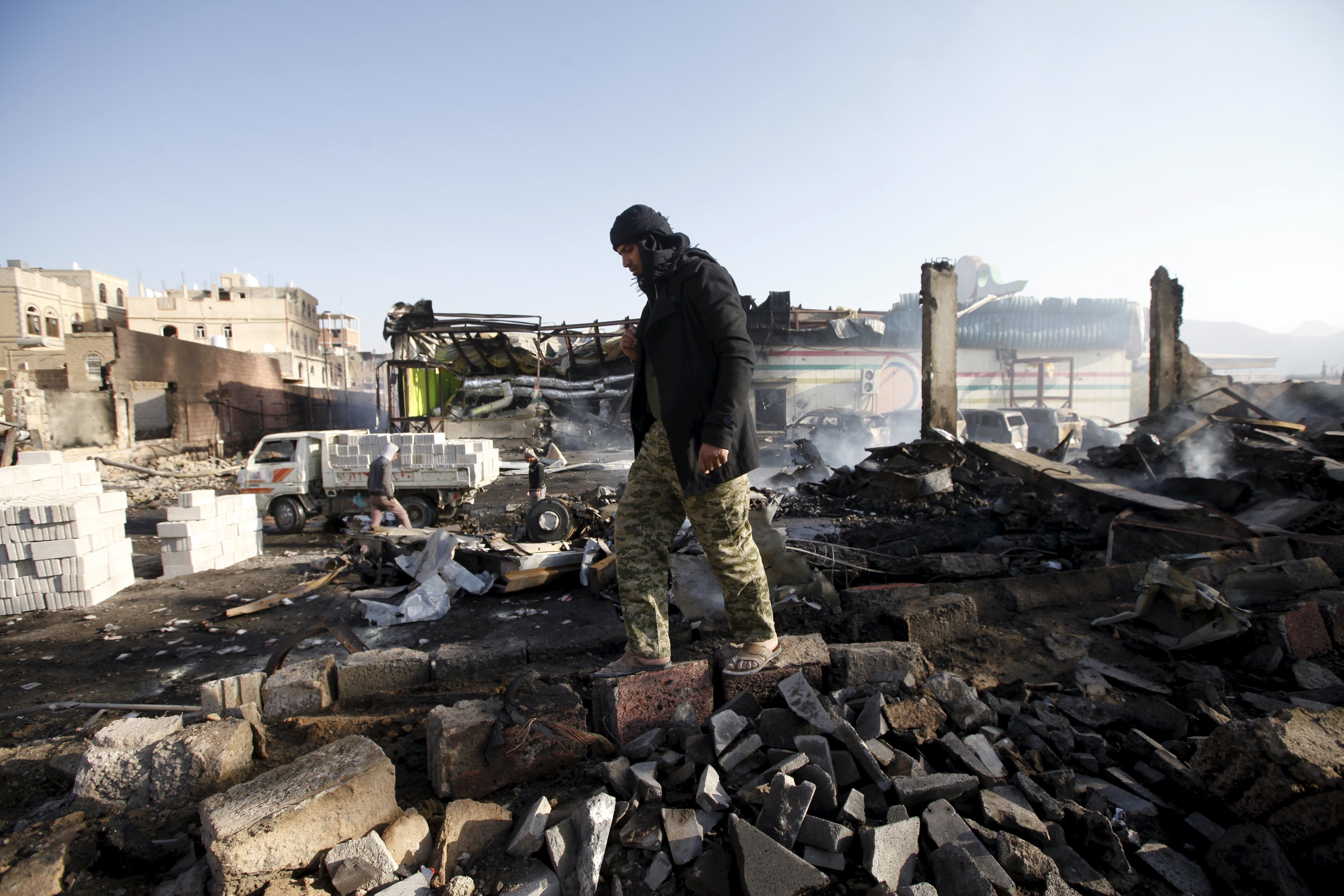 A Houthi militant walks through smoke and debris at an amusement park after it was hit by Saudi-led air strikes in Yemen's capital Sanaa, February 12, 2016.

GENEVA – A group that campaigns for stricter arms sales controls said on Monday that Western powers were breaking international law by selling vast amounts of weapons to Saudia Arabia that are being used to hit civilians in Yemen.

The Control Arms Coalition said Britain, France and the US were flouting the 2014 Arms Trade Treaty (ATT), which bans exports of conventional weapons that fuel human rights violations or war crimes.

"It is extremely concerning that many transfers are still continuing, in particular the governments of the United States, the UK and France have authorised and are continuing to export very large quantities of weapons, including explosive weapons, bombs which are being used daily against civilians in Yemen," said Anna MacDonald, director of the Control Arms Coalition. She was speaking to a news briefing as week-long UN negotiations began in Geneva aimed at putting teeth into the ATT which lacks a mandatory public reporting system for the $100-billion (R1,36-trillion) global arms trade.

France authorised arms licences worth $18bn to Saudi Arabia last year, followed by the US at $5,9bn and Britain&39;s $4bn, the group said in its latest study.

Nigeria&39;s ambassador Emmanuel Imohe, who chairs the conference, said: "The allegation is quite grave and it should be of concern to everyone including the ATT secretariat itself."

Medecins Sans Frontieres (MSF) said last week it was evacuating its staff from six hospitals in northern Yemen after a Saudi-led coalition air strike hit one of its hospitals, killing 18 people.

The coalition says it does not target civilians and accuses the Houthi group that it is battling in Yemen of placing military targets in civilian areas.

A body that the coalition set up to look into civilian casualties is investigating the MSF incident, among others.

Arms sales to Saudi &39;illicit&39; due to civilian deaths in Yemen: campaigners https://t.co/ok4cLMrniW

The war has killed more than 6,500 people since it began 16 months ago and raised the prospect of famine in the Arab world&39;s poorest country.

Outcry over civilian casualties has led some members of the US Congress to push for restrictions on arms transfers.

The Obama administration this month approved a potential $1,15bn arms package for Saudi Arabia. In a statement on Friday, the Pentagon cautioned that its support for Saudi Arabia in its campaign was not "a blank cheque", however, and said it has pressed the coalition on the need to minimise civilian casualties.

"We think that governments of other countries have fuelled this violence by repeatedly authorising arms transfers to South Sudan," said Geoffrey Duke, head of South Sudan Action Network on Small Arms.

He named China, Ukraine and South Africa as the main suppliers to the Juba government.

To date, 87 countries have ratified the ATT, while another 46 – including the United States – have signed it, leaving important gaps, Imohe said.

"For example, in the Arab world only Mauritania is listed amongst states parties, while Asia Pacific has only three states parties," he said, referring to Japan, Samoa and Tuvalu.

Amnesty International said: "Big arms traders Russia and China have not joined the ATT and have supplied gross violators of human rights."