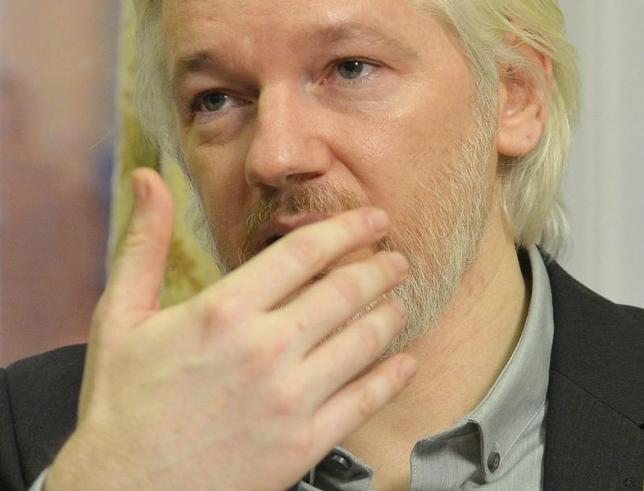 WikiLeaks founder Julian Assange fears that if Britain extradites him to Sweden he would then be extradited to the United States where he could be tried for one of the largest information leaks in US history.

LONDON - A British judge upheld an arrest warrant for WikiLeaks founder Julian Assange on Tuesday but delayed until next week her decision on a further application by his lawyers to cancel it.

Assange has been holed up in the Ecuadoran embassy since 2012 to dodge a European arrest warrant and extradition to Sweden over a 2010 probe there into rape and sexual assault allegations against him.

But British police are still seeking to arrest Assange for failing to surrender to a court after violating his bail terms during his unsuccessful battle against extradition.

"I&39;m not persuaded that the warrant should be withdrawn," Judge Emma Arbuthnot told a court in London, explaining that Assange had breached his bail conditions in 2012.

But she said she would rule separately on another application from Assange&39;s lawyers asking her to consider whether it would be in the "public interest" to keep the warrant in place.

That ruling will be issued on February 13.

"The decisions that the court makes definitely have an effect, but they do not determine our decision and we will continue to provide our protection to Mr Assange," Moreno said at a meeting in Quito with the foreign press.

Moreno, who came to power in May, said he had undertaken from "the first day of his term" to protect Assange, considering his life to be "in danger".

Ecuador&39;s foreign ministry said it wants to reach a solution with Britain that satisfies both sides and respects Assange&39;s human rights.

Assange&39;s lawyer Mark Summers had argued in court last week that the British arrest warrant had "lost its purpose and its function".

He said Assange had been living in conditions "akin to imprisonment" and his "psychological health" has deteriorated and was "in serious peril".

"The last five-and-a-half years that he has spent may be thought to be adequate, if not severe punishment, for the actions that he took," Summers said.

The court heard that the 46-year-old was suffering from a bad tooth, a frozen shoulder and depression.

"The proper approach is that when a discrete, standalone offence of failing to surrender occurs, it always remains open to this court to secure the arrest," he said.

Assange has refused to leave the embassy, claiming he fears being extradited to the United States over WikiLeaks&39; publication of secret US military documents and diplomatic cables in 2010.

US Attorney General Jeff Sessions last year said his arrest was a "priority".

Assange only very rarely emerges onto the balcony of the embassy building, citing concerns for his personal safety, but he frequently takes part in media conferences and campaigns via video link.

Ecuador in December granted citizenship to the Australian-born Assange, and asked Britain to recognise him as a diplomat, in an unsuccessful attempt to provide him with immunity and usher him out of its embassy without the threat of arrest.

But London swiftly rejected the move.

"Ecuador knows that the way to resolve this issue is for Julian Assange to leave the embassy to face justice," the British government said.

Assange has strained the patience of his hosts during his long stay.

He was publicly reprimanded for interfering in the 2016 US election after publishing emails from Democrat Hillary Clinton&39;s campaign team.

More recently, he drew the ire of Moreno when he used Twitter to issue messages of support for Catalonia&39;s independence drive. The Ecuadoran president was forced to respond to complaints from the Spanish government.

Moreno admitted last month Assange was an "inherited problem" that had created "more than a nuisance" for his government.

"We hope to have a positive result in the short term," Moreno said in an interview with television networks.