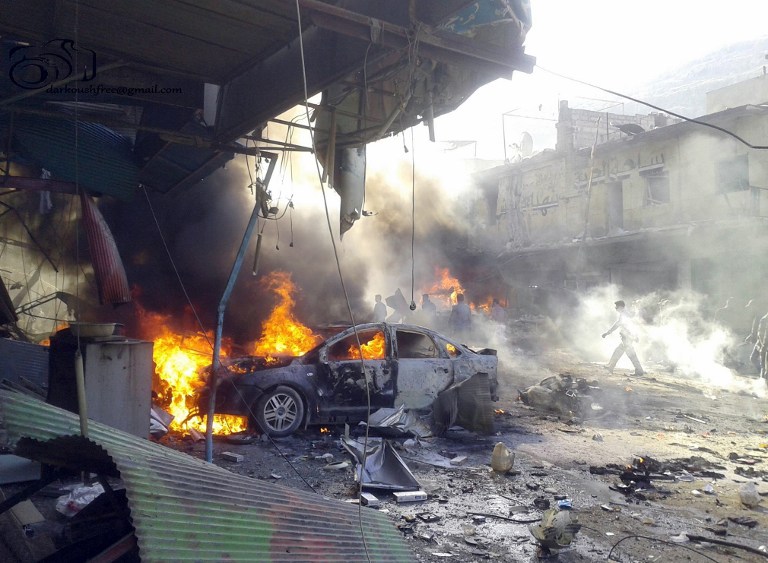 A picture released by the Syrian Observatory for Human Rights on Monday shows vehicles burning following an explosion in the town of Darkush in Syria's Idlib province.

BEIRUT - At least 22 civilians including a child were killed in air strikes on an Al-Qaeda-held town in northwest Syria on Friday, a monitoring group said.

The South African organisation Gift of the Givers  told eNCA the attacks took place near its  Ar Rahma Hospital in Darkush, near the Turkish border.

"Immediately, there were 22 fatalities, mostly women and children," said Imtiaz Sooliman, the spokesman for Gift of the Givers. "From there we sent in four ambulances, because we have our own ambulances, and brought in casualties to the hospital.

"Because they were so seriously injured, we couldn’t waste time and we had to send patients to Turkey,” he said.

The Syrian Observatory for Human Rights said a child and seven women were among those killed.

At least 15 martyrs following multiple heavy airstrikes on a market in the rebel-held town of Darkush, NW of Idlib. pic.twitter.com/QjZLjAYeQj

Darkush is held by Al-Qaeda affiliate Al-Nusra Front and allied rebel groups, which control the northwestern province of Idlib.

A Facebook page run by activists in the town posted photographs showing a column of grey smoke curling out of a town tucked in verdant hills.

It said some of the wounded had been transferred to nearby hospitals, and others across the border into Turkey.

The Britain-based Observatory had no immediate word on who carried out the strikes but said it was likely to have been either the Syrian government or its ally Russia, rather than the US-led coalition.

Russia launched air strikes in support of the Damascus regime in September, one year after the international coalition bombing the Islamic State (IS) group in Iraq extended its raids to Syria.

The Syrian army announced on Wednesday it would observe a 72-hour nationwide ceasefire for Eid al-Fitr, the feast marking the end of the Islamic holy month of Ramadan.

It was unclear if Al-Nusra was included, but the Al-Qaeda affiliate and its jihadist rival, IS, were excluded from a broader truce brokered by Moscow and Washington in February.

The Kremlin said on Wednesday that President Vladimir Putin and his US counterpart Barack Obama had agreed to "intensify" military coordination in Syria.

The White House said the two leaders had "confirmed their commitment to defeating ISIL (IS) and the Al-Nusra Front".

The Observatory, which relies on a network of sources inside Syria for its information, says it determines what aircraft carried out raids based on their location, flight patterns and the types of planes and munitions involved.

More than 280,000 people have been killed in Syria since the country&39;s civil war erupted in 2011, starting with peaceful protests that swiftly escalated into an armed rebellion increasingly dominated by jihadist groups.