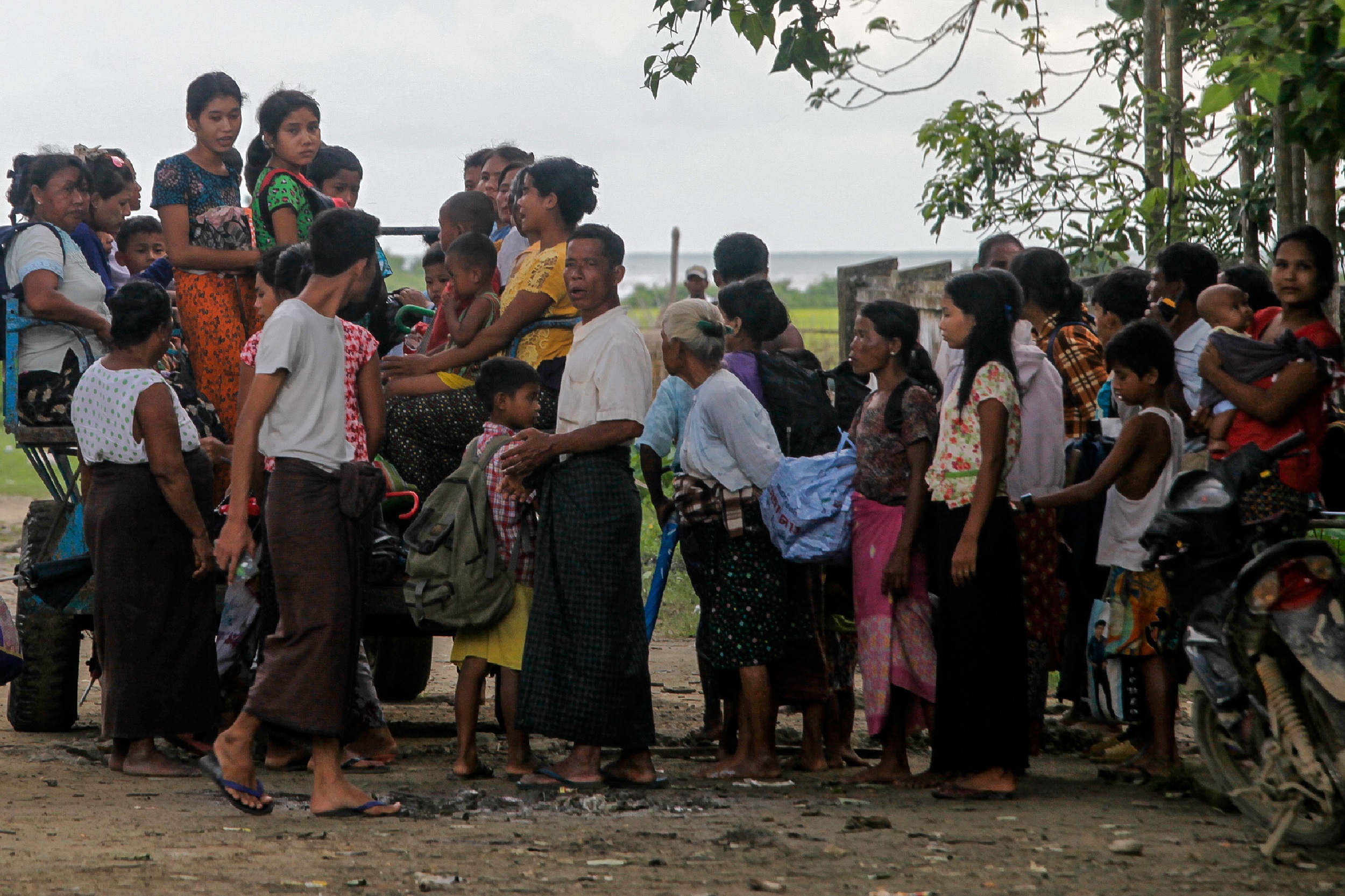 Ethnic Rakhine people fleeing from a conflict area at the Yathae Taung township in Rakhine State in Myanmar.

COX'S BAZAAR, Bangladesh - At least 6,000 Rohingya civilians fleeing renewed violence in Myanmar are stranded near the border with Bangladesh which is blocking their entry, a senior Bangladeshi official said Tuesday, as the United Nations urged Dhaka to assist them.

Bangladesh blocked thousands of civilians from the stateless Muslim minority from entering the country since Friday, when fresh fighting broke out between Myanmar's security forces and Rohingya militants in neighbouring Rakhine state.

The UN refugee agency said 3,000 managed to cross into Bangladesh in the past three days, but the vast majority were stopped at the border despite heavy fighting in nearby villages.

"Around 6,000 Myanmar nationals have gathered on the border and are trying to enter Bangladesh," a senior Border Guard Bangladesh (BGB) official told AFP, referring to the Rohingya.

The official said the situation across the border, which is demarcated in parts by narrow stretches of the Naf River, was "still volatile".

"Last night we heard heavy gunfire by automatic weapons in phases and saw smoke billowing from burnt villages across the border," he said.

Another BGB official estimated the number of Rohingya in limbo could exceed 10,000, as many were believed to be hiding in the hills and forests to escape nearby violence.

"We've been ordered not to allow Rohingya to enter Bangladesh," said one border guard, who asked to remain anonymous as he was not permitted to speak to media.

"But how can I deny shelter to this newborn who is dying from cold?"

UN Secretary-General Antonio Guterres called on Bangladesh to step up assistance to civilians escaping the violence, noting "many of those fleeing are women and children, some of whom are wounded".

But there are already 400,000 Rohingya living in squalid camps in Bangladesh and the government instructed its border guards to prevent another influx at all costs.

Bangladesh on Monday proposed joint military operations with Myanmar against Rohingya militants fighting in Rakhine state, hoping to stem the flow of refugees.

Mohammad Ismail had taken shelter from the rains under a plastic sheet erected by border guards just inside Bangladeshi territory, but the shelter has since been torn down.

"The border guards let us take shelter here, but I don't know now what I will do with my son," he told AFP, gesturing to the shivering boy.

Army convoys have been driving Rohingya who managed to cross into Bangladesh back across the border several times a day, an AFP correspondent at the scene said.

Amid the turbulence and monsoon downpours, an 11-year-old Rohingya girl named Marium was separated from her parents.

"I went to the toilet when the (border) guards drove away my parents. Where shall I find them now?" the young girl told AFP in tears.