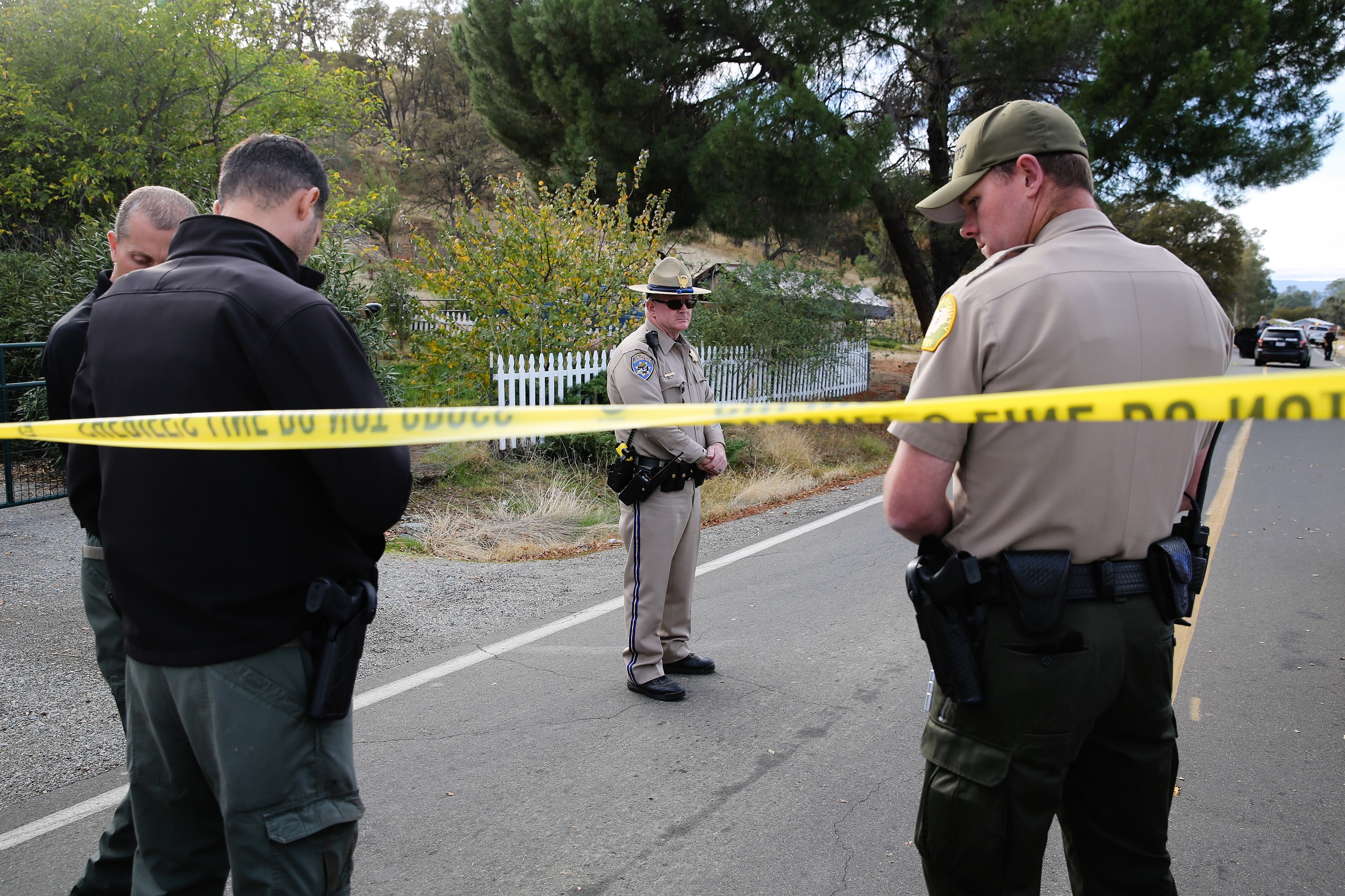 Law enforcement officers stand near one of many crime scenes after a shooting on November 14, 2017, in Rancho Tehama, California.

LOS ANGELES - Four people were killed and nearly a dozen wounded, including two children, when a gunman went on a rampage Tuesday, randomly picking his targets at a school and other locations in rural northern California.

Tehama County Assistant Sheriff Phil Johnston told reporters that the assailant was killed by police following the mass shooting, which began around 08:00 (16:00 GMT) at a home in Rancho Tehama Reserve and continued at several locations in the community, including the elementary school.

He said no children were among the dead and the motive for the assault was unclear, although it may be linked to a domestic dispute and a history of disagreements with neighbours.

"It was very clear at the onset that we had an individual that was randomly picking targets," Johnston said at a news conference.

"This man was very, very intent on completing what he set out to do today."

He said one child was shot and wounded at the school. Another suffered non-life-threatening injuries while riding in a car with his mother, who was severely wounded.

Johnston said the gunman, who has not been identified, went on his shooting spree after stealing a neighbour&39;s vehicle and then tried to gain access to the school but was unsuccessful as it was on lockdown.

He said the suspect, who was wearing a military-style vest, left the school to continue on his rampage and crashed the vehicle at one point. He then stole a second vehicle and was killed in a shoot-out with police.

One of the four victims was a woman the gunman had previously been accused of stabbing, Johnston said.

Multiple students were airlifted from their CA elementary school, including a 6-year-old with gunshot wounds, after a gunman in remote rural area of Northern California started shooting people at random.@CBSMireya has more pic.twitter.com/Er8R3rBnmh

Tello "said he saw bullets strike the truck in front of him and he put his children down to protect them and put his truck to... reverse," Redding Record Searchlight newspaper reporter Jim Schultz said on Twitter.

"As he left, he saw (a) woman lying dead in the street and her... wounded husband next to her. Was told help was on its way."

Another witness, Casey Burnett, said the gunman was "driving around and shooting randomly from his car."

Area resident Brian Flint told local media that his roommate had been shot and killed by the gunman.

He said the gunman was a neighbour and had "been shooting a lot of bullets lately, hundreds of rounds, large magazines."

The shooting coincides with a flare-up of the long-running debate on America&39;s epidemic of gun violence and the ready accessibility of high-powered weapons, less than 10 days after a gunman shot dead 26 people at a church in Texas.

Johnston told reporters that three weapons - a semi-automatic rifle and two handguns - had been recovered from the scene.

He added that some 100 law enforcement officers responded to the shooting.

The Redding Record Searchlight said among the wounded was a six-year-old who suffered two gunshot wounds and another child shot in the leg.

The elementary school is located on the outskirts of Corning, an olive oil-producing town of around 8,000 people about 160km north of the state capital Sacramento.

Jason Wandel, chief division counsel at the FBI&39;s Sacramento field office, told AFP that agents had been sent to help with the investigation.

More than 33,000 people die annually in the United States from gun-related deaths - two-thirds of them suicides - according to the Centres for Disease Control and Prevention.

Families of victims of one of the deadliest shootings in modern US history pushed to reinstate a lawsuit to hold a gun manufacturer responsible for the tragedy.