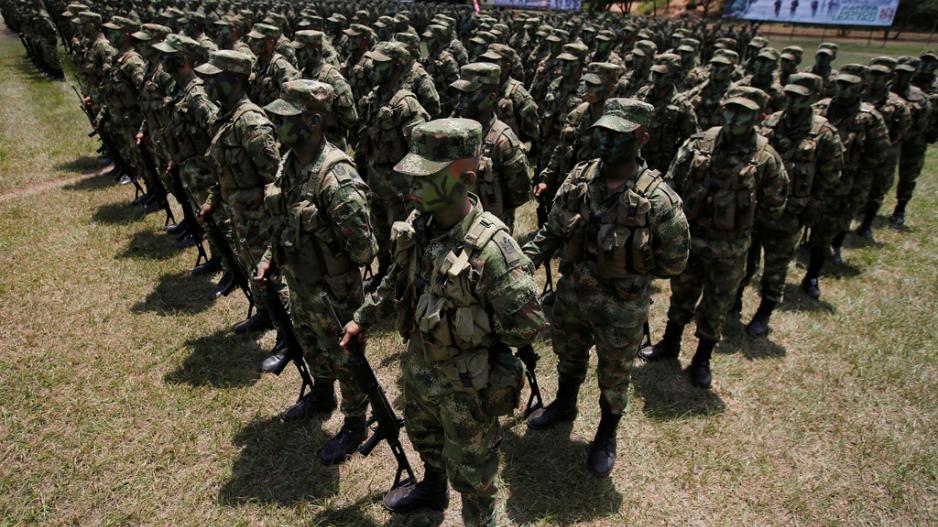 Colombian soldiers during the graduation ceremony of soldiers in Nilo, Colombia, February 17, 2017. The soldiers will be deployed to occupy territories formerly controlled by FARC rebels.

BOGOTA - A police officer was injured Sunday in an attack on a UN mission monitoring the disarming of rebels in Colombia as part of its peace deal, authorities said.

Assailants attacked the location where the FARC rebel group had a weapons stash in the southwestern town of Caloto, in Cauca department, according to police, who said a splinter group of the Marxist rebels or the smaller National Liberation Army could have been behind the violence.

But Cauca police general Edgar Rodriguez said the pro-Cuban ELN was to blame. The ELN is currently the only group at arms in Colombia, though it is seeking to negotiate a peace deal.

The disarmament, mainly in June, by the roughly 7,000 members of Colombia's biggest rebel group under the 2016 peace accord brought a halt to the war.

Colombian President Juan Manuel Santos was awarded the Nobel Peace Prize for reaching the historic deal with the FARC. It was signed last November.

The conflict left a quarter of a million Colombians dead, about 60,000 unaccounted for and seven million displaced.

The FARC was born in May 1964 from a peasants' revolt. Its ranks were made up mostly of country dwellers who rallied behind the group's Marxist-Leninist ideology, with land reform its focus.