US soldiers killed on base 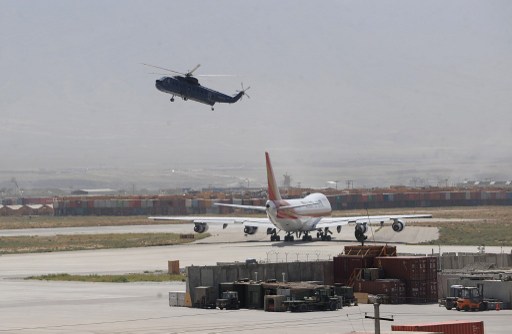 (FILE) The deadly rocket attack on Bagram, Afghanistan's biggest US-led military base just north of Kabul, was a stark reminder of the potency of an Islamist insurgency that has time and again hit major targets.

KABUL - The Taliban on Wednesday claimed an audacious attack in Afghanistan that killed four US troops mere hours after Washington said it would talk to the insurgents about ending more than a decade of war.

The deadly rocket attack on Bagram, Afghanistan&39;s biggest US-led military base just north of Kabul, was a stark reminder of the potency of an Islamist insurgency that has time and again hit major targets.

Prior to the Bagram attack, US President Barack Obama had welcomed the planned talks in Qatar as an "important first step".

But he warned of a bumpy road ahead as NATO troops enter the final stage of a 12-year foreign intervention.

"Four soldiers are dead and six others are wounded. The rockets caused a major fire."

A US defence official confirmed that four Americans were killed in the attack, but provided no further details.

The Taliban broke off contact with the Americans last year and have always refused to negotiate with Kabul.

On Tuesday, they unveiled an office in Qatar "to open dialogue between the Taliban and the world".

Their statement, however, made no direct reference to peace talks.

Tuesday also saw NATO&39;s formal transfer of responsibility for security to the Afghan police and army.

A divided insurgency is also likely to complicate talks, amid doubts as to whether the "Haqqani network" of warlord Jalaluddin Haqqani, a former CIA asset turned Al-Qaeda ally, is ready to embrace negotiation.

A Taliban spokesman in Qatar, Mohammad Sohail Shaheen, confirmed before the Bagram strike that the armed group would continue to attack US targets in Afghanistan at the same time as holding any talks.

"There is no ceasefire (with the US) now. They are attacking us and we are attacking them," Shaheen told the Al-Jazeera news channel, adding that the Taliban "simultaneously follows political and military options".

Obama insisted the Taliban would have to renounce ties to Al-Qaeda, halt violence and commit to the protection of women and minorities. He warned that US-led NATO forces remain "fully committed" to battling Al-Qaeda.

"An Afghan-led and Afghan-owned peace process is the best way to end the violence and to ensure lasting stability in Afghanistan and the region," Obama said on the sidelines of a G8 summit in Northern Ireland.

Karzai stressed on Tuesday that any dialogue would have to move from Doha, the capital of Qatar, to Afghanistan as soon as possible.

The Taliban were driven from power by US-backed rebels after the September 11, 2001 attacks. They have since mounted a guerrilla war against the Afghan government and maintain rear bases in Pakistan.

With the war at a stalemate, the US-led NATO army is concentrating on training Afghan government troops to take charge when most international forces leave in the course of next year.

A US official said American and Taliban envoys would meet in Doha "in a couple of days", after which the Taliban would meet with a "High Peace Council" set up by Karzai to conduct the negotiations.

In opening their mission, the Taliban did not explicitly renounce Al-Qaeda, which they refused to expel after the 9/11 attacks, but they did vow to prevent attacks being launched from Afghanistan.

Speaking Tuesday, US State Department spokeswoman Jen Psaki said that an eventual disavowal of Al-Qaeda ties by the Taliban was only an "end goal of the process".

Psaki said James Dobbins, US special representative for Afghanistan and Pakistan, would leave Washington later Tuesday bound for Doha to lead the US teams.