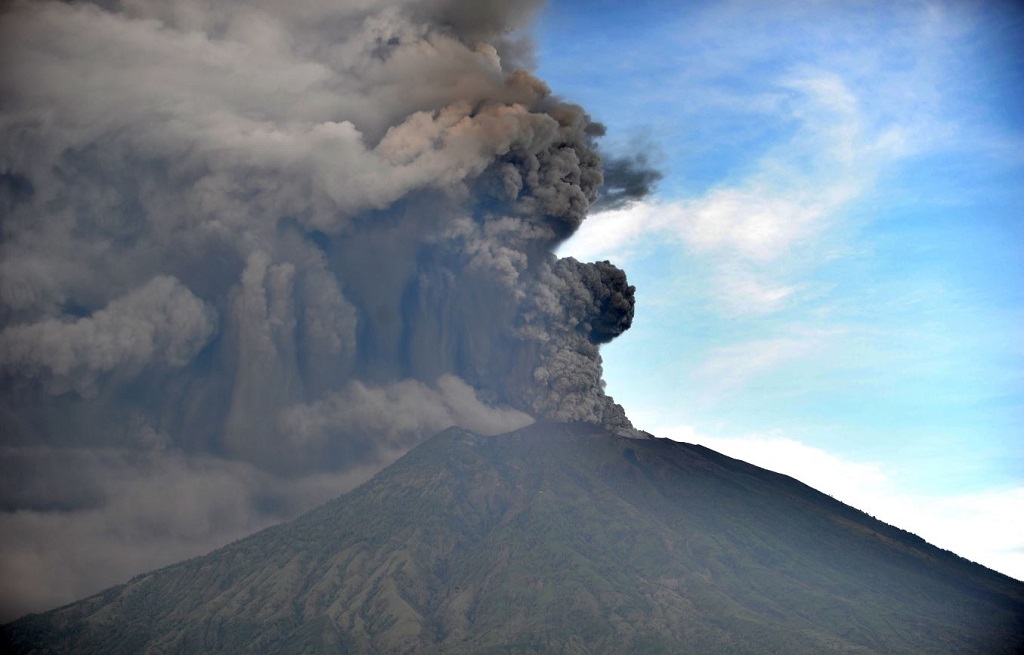 General view of Mount Agung during an eruption seen from Kubu sub-district in Karangasem Regency, on Indonesia's resort island of Bali on November 26, 2017.

KARANGASEM - Some 100,000 people must evacuate from the danger zone around a rumbling volcano on the Indonesian resort island of Bali, officials said on Monday after warning of an imminent eruption.

Some 40,000 people have already left communities near Mount Agung but that figure is set to more than double, the Disaster Mitigation Agency said, as massive columns of thick grey smoke spew from the volcano.

Massive columns of thick grey smoke have been pouring out of Mount Agung since last week and they shot more than three kilometres into the sky early Monday, prompting the island&39;s international airport to be closed, leaving thousands of tourists stranded.

Agung started rumbling again last week and so-called cold lava flows appeared on Monday - they are similar to mud flows and are often a prelude to the blazing orange lava seen during many volcanic eruptions.

"The volcano&39;s alert level has been raised to the highest level," said senior state volcanologist Gede Suantika. "Constant tremors can be felt."

Mt. Agung last erupted in 1963, killing about 1,600 people, one of the deadliest eruptions in a country that has more than 120 active volcanoes.

The exclusion zone around Agung, which is 75 kilometres from the tourist hub of Kuta, has been widened to 10 kilometres, with people living in that area being urged to evacuate.

READ: Locals warned to stay away as Japanese volcano erupts

About 25,000 people living nearby the mountain have already left their homes and evacuated since Agung first started to spew smoke on Tuesday.

"Continuous ash puffs are sometimes accompanied by explosive eruptions and a weak booming sound," the National Board for Disaster Management said in a statement.

"The rays of fire are increasingly observed at night. This indicates the potential for a larger eruption is imminent."

"As we have widened the exclusion zone, so the number of people evacuating will increase but we don&39;t have the latest data yet," he told AFP.

Ash from Mount Agung has been covering villages nearby and officials have distributed thousands of face masks to local residents.

"I&39;m very concerned because I left my house behind and I&39;m also worried about family," said 36-year-old farmer Putu Suyasa, who fled with some of his relatives from a village eight kilometres away from the volcano.

"The mountain is spewing thicker smoke than before," he added.

The airport in Bali&39;s capital Denpasar, a top holiday destination that attracts millions of foreign tourists every year, has been closed.

"I have to make sure that the runway has no ash," said Bali airport&39;s general manager Yanus Suorayogi, explaining why the airport was shuttered.

The closure is set to affect tens of thousands of passengers, he added.

"It&39;s a natural disaster, okay, but what can we do? We came from India," said one stranded tourist who identified herself as Madhu.

The airport on Lombok island - also a popular tourist destination east of Bali - has been closed since Sunday afternoon as the ash from Mount Agung headed into that direction, but it reopened early on Monday.

The Australian government put out a travel advisory Sunday instructing travellers to exercise a high degree of caution in Indonesia.

Agung rumbled back to life in September and authorities raised the alert to the highest level, forcing 140,000 people living nearby to evacuate.

The volcano&39;s activity decreased in late October and many people returned to their home as the alert was lowered to the second-highest level.

The mountain sent smoke up into the air on Saturday for the second time in a week in what volcanologists call a phreatic eruption - one which is caused by the heating and expansion of groundwater.

Dozens of Balinese Hindus took part in ceremonies near the volcano on Sunday, offering prayers in the hope of preventing an eruption.

Officials have said the activity could be a magmatic eruption - one which involves the decompression of gas and results in the spewing of ash - and advised people near the mountain to wear masks.

Indonesia is the world&39;s most active volcanic region.

The archipelago nation with over 17,000 islands lies on the Pacific "Ring of Fire" where tectonic plates collide, causing frequent volcanic and seismic activities.

Last year, seven were killed after Mt. Sinabung on the western island of Sumatra erupted, while 16 were left dead by a Sinabung eruption in 2014.

END_OF_DOCUMENT_TOKEN_TO_BE_REPLACED

ANC to decide on Masuku's future