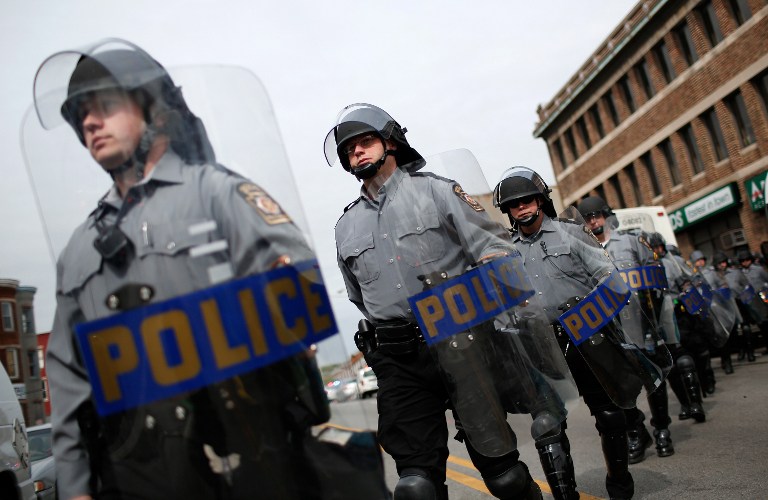 Pennsylvania State Troopers in riot gear deploy near the intersection of North Avenue and Pennsylvania Avenue May 1, 2015 in Baltimore, Maryland.

BALTIMORE - Six Baltimore police officers will face criminal charges, including second-degree murder and manslaughter, in the death of a black man who was arrested and suffered fatal injuries while riding in a moving police van, the city&39;s chief prosecutor said on Friday.

Marilyn Mosby, the state&39;s attorney for Baltimore City, said Freddie Gray, who died a week after his April 12 arrest, suffered a critical neck injury as a result of being handcuffed inside the van.

Breaking news. FreddieGray was illegally arrested, death deemed a homicide, occurring while he was in police custody.

She said officers failed to provide medical attention to Gray even though he asked for it on at least two occasions.

Warrants have been issued for the arrest of the officers charged in the case, she said. In addition to murder and manslaughter, charges include assault, misconduct and false imprisonment.

In a dramatic news conference, Mosby said the Maryland chief medical examiner ruled Gray&39;s death a homicide and that his spinal injuries occurred while he was riding without restraints in the van.

Gray was no longer breathing when he was finally removed from the van, Mosby told a crowd, which broke into applause after she finished speaking.

Gray&39;s death on April 19, a week after his arrest, is the latest flashpoint in a national outcry over the treatment of African-Americans and other minority groups by US law enforcement.

After a night of rioting in Baltimore on Monday, protests spread to other major cities in a reprise of demonstrations last year set off by police killings of unarmed black men in Ferguson, Missouri, New York and elsewhere.

Without protestors in the streets, I am certain that these 6 officers would still be on the streets. FreddieGray