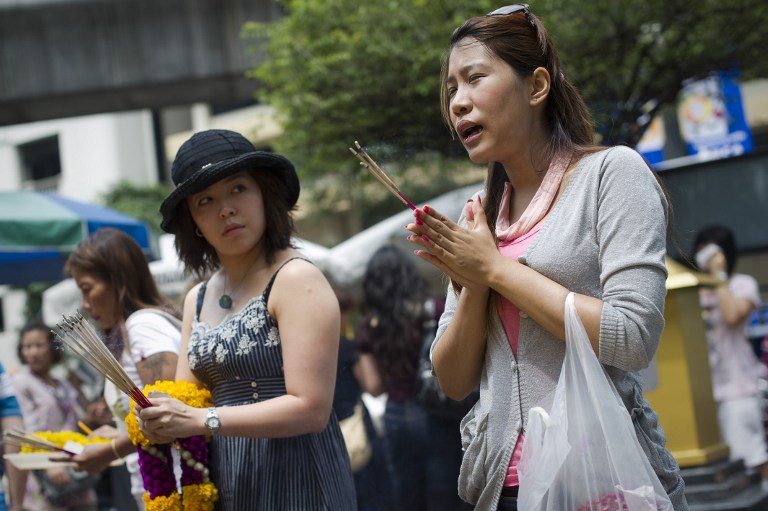 People pray in front of the Erawan shrine in Bangkok on September 8, 2010. The Hindu shrine honouring Thailand's representation of the Hindu God Brahma in the central of the Thail capital is a popular tourist attaction.

BANGKOK – The hunt for a group behind the Bangkok bombing focused on Wednesday on an emerging link with Turkey as Thai police issued an arrest warrant for a Turkish national for possessing "war materials".

It is the first time the Thai authorities have revealed the nationality of a foreign suspect in the August 17 blast at a religious shrine that killed 20 people, mostly ethnic Chinese tourists.

A total of eight people are now wanted in connection with the unprecedented attack while a further two unnamed foreigners have been arrested and are in military custody.

Police named the latest suspect as Emrah Davutoglu, the husband of Thai national Wanna Suansan, the only other suspect to be publicly identified.

"He is Turkish," national police spokesman Prawut Thavornsiri told reporters adding that the charge he was wanted for was "possession of war materials".

Police are now convinced a network of suspects either from Turkey or using fake passports from there are responsible for the attack.

"From our arrests, it is clear that this network sent people to that country," Prawut said, referencing Turkey.

Thai media have aired a theory linking the bomb to ethnic Uighur Muslim militants who have fled their homeland in China seeking sanctuary overseas.

Thailand deported scores of Uighurs to China this summer, sparkling protests in Turkey in support of a group with religious and linguistic ties to many Turks.

After nearly two weeks without progress, police made a breakthrough on Saturday when they raided a flat in Nong Chok, a suburb on the eastern outskirts of Bangkok.

It yielded their first arrest since the bomb – a foreign man allegedly in possession of bomb-making paraphernalia and dozens of fake Turkish passports.

The second foreign man was then detained on Tuesday while trying to cross into Cambodia.

Earlier on Wednesday police said evidence showed he was at the same flat because his fingerprints were found on bomb-making equipment at that flat.

“@TIME: Fingerprints of a foreign man arrested in Thailand match those found on a bombmaking material http://t.co/N2SXuHfa61”

"We can confirm that this man is directly involved with the bomb material," Prawut said.

The man has denied involvement in the bombing.

Investigators say that both Wanna and Davutoglu spent time at a flat raided in Bangkok over the weekend where bomb-making equipment was allegedly discovered.

The police spokesman later posted a picture of Davutoglu on Twitter, showing a man with dark hair and a thin moustache at what is believed to be airport immigration.

The pair are known to have left Thailand weeks ago.

Wanna spoke to AFP this week and insisted she was innocent of any involvement in the bomb, adding a friend of her husband had been staying at the flat.

She told AFP she was in the town of Kayseri in Turkey, which is her husband&39;s birthplace – according to a photo of his passport circulated by police on Tuesday.

Speculation has mounted that the shrine was targeted by a network sympathetic to the Uighurs because of the site&39;s popularity with ethnic Chinese.

Uighur refugees, who speak a Turkic-language, have been granted sanctuary in Turkey.

Police have refused to confirm the two arrested men&39;s nationalities. They believe both used fake identity documents and are liaising with embassies to ascertain their true nationalities.

Thai media have circulated a picture of a Chinese passport that they say was found on the man at the time of the arrest on the Cambodian border.

The passport gives the man&39;s name as Yusufu Mieraili and his birthplace as Xinjiang.

The vast far-western region of China is home to the country&39;s Uighurs, a Muslim minority whom rights groups say are repressed by the authorities.

Asked whether the detainee was a Uighur, Chaktip replied: "The passport says so. But we have to wait for confirmation."

Thai police say the bomb was carried out by a criminal network motivated by revenge after a people-smuggling trade was disrupted.